The percentage of those getting infected by COVID is, as of today, 66.1 percent, close to double the the percentage of Hispanics living in Travis County (33.9%). Also read yesterday's May 18, 2020 NBC News report titled, “Hispanic leaders demand Austin, Texas, step up coronavirus response for Latinos amid high cases, deaths: Latinos are 34 percent of Austin's population but over half of all COVID-19 cases in Austin and Travis County and are 38 percent of the COVID-19 deaths."   I myself blogged about this looming crisis here in Austin a month ago on April 18th.

There's more to the story that you can read about in this KXAN piece posted yesterday below, but I am not at all surprised that construction work is a culprit. I called and sent emails complaining to the Texas Attorney General's office, the mayor's office, a city Council member, and at least two news stations, including KXAN, about this. I was very specific with them, pointing to construction sites near the University of Texas at Austin campus where I saw workers working in close proximity to one another without any masks, gloves, or hand washing stations. And yes, they were mostly Mexican and I told them that this is racist and discriminatory.

What folks should know is that throughout this entire time of supposed lockdown, many crews were out and about getting work done at construction sites across the city even as the workers themselves were worried, without the hand sanitizers, masks, and other protections despite their getting characterized, under Governor Abbott's stay-at-home orders, registering them as "essential workers."  Yet not all of the workers—perhaps not even most—at these work sites were defensibly "essential."  Rather there was a loophole that had been exploited to justify their continuing work throughout this whole time period.  Here's the actual policy:

Section 6, Section f. ix. Critical Trades. Plumbers, electricians, exterminators, pool cleaners, and other service providers who provide services that are necessary to maintaining the safety, sanitation, and essential operation of residences, essential activities, Essential Businesses, Essential Government Functions, or Critical Infrastructure, including but not limited to utilities such as electricity, gas water and wastewater, and other public works.

After I made these calls (and am sure others did, as well), here is what appeared at my friend's local construction site where he is specifically involved in the building of a luxury condominium site (not "affordable housing") near the University of Texas that under any reasonable definition hardly qualifies as "essential."
It's interesting that the notice posted in Austin construction work sites comes from San Antonio, but the message is the same, namely, that they are essential workers.
In any case, Travis County Judge Sarah Eckhardt's order—that you can view online here—aligns, and is no less racist and discriminatory.  She is running for State Senator, by the way.  Her callous disregard for our construction workers disqualifies her.

I expressed anger to government officials, that if workers were being forced to work, that corporate bosses should minimally be providing them with protections.  It's sad and disgusting to have witnessed this play out because construction companies were basically given a pass. And now, we're witnessing significant illness and death in our community, a public health crisis of our government's own making.

Instead of protecting truly non-essential construction workers—like those building luxury condominiums or in hotels like the downtown Marriott, their lives have been sacrificed so that these corporations and companies could squeeze out their last ounce of labor in this economic slowdown at the expense of these workers and their families. And now they're treated like "untouchables" and are discriminated against when they enter local convenience stores to get food.

Shame on our governor.  Shame on Travis County.  Shame on our "progressive-for-Whites" City of Austin.  This is racism and prejudice in the first degree.  Although construction workers ideally would already be unionized, such as with the IBEW, this doesn't keep the city and county from simply doing the right thing and providing workers with the same protections and guarantees that IBEW union workers already receive.

My final word is to the Hispanic/Mexican/Chicano/Latinx and people of color community at large is that Travis County Judge Sarah Eckhardt has failed us and is that last person who deserves our vote.  She manifest the same kind of racism and elitism as her counterpart in Wisconsin, Justice Patience Roggensack, who offensively commented that COVID was attributable to the meatpackers [read black and brown people] instead of, in her words, "To the regular folks in Brown County."

Judge Sarah Eckhardt has put workers, and thusly, the "regular folks" of Travis County at large, at unnecessary risk.  If we do not have protection from state government, our last lines of defense are our city and county governments.  If you're not serving our community and actually harming it, you have violated your oath of office.

¡Ya basta!  People are dying!  Enough is enough!

P.S. Here is a document with information resources regarding COVID-19 in Austin,TX and is being updated regularly. For further questions, call 3-1-1. 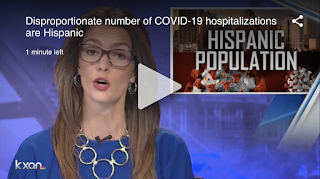 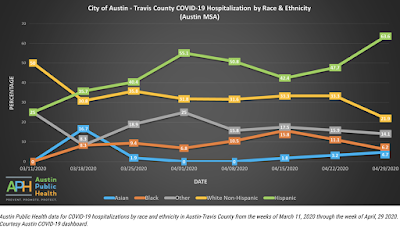 These numbers were added as part of a new feature Friday to the Austin COVID-19 dashboard and were presented before Travis County Commissioner’s Court on Tuesday.
“As we expected,” explained Escott as he talked with the commissioners. “We’ve had a steady increase and a persistent increase in the percentage of Hispanics hospitalized as the weeks have progressed, which far outpaced their representation in our community.”
Escott has said these numbers were “expected” because reports from around the country have indicated that people of color in many communities have been disproportionately impacted by the novel coronavirus.
In April, the U.S. Surgeon General Jerome Adams explained that while the federal government does not think people of color are biologically or genetically predisposed to get COVID-19, that people of color are socially predisposed to coronavirus exposure and have a higher incidence of diseases that put people at risk for COVID-19.
Escott listed off multiple reasons he believes have led Austin to see this increasing rate of hospitalizations for Hispanic community members. He noted that in Austin, people of color are more likely to work in jobs where they will need to interact face-to-face with other people, which increases their risk of having the virus spread to them. Escott said that these communities also historically lack access to effective health care and have social determinants that can lead to higher rates of hospitalization. Additionally, he noted that people of color are more likely to live with multiple generations in one household, which makes the spread of the virus within a household more likely.
Escott also noted that the rate of people tested for COVID-19 at the Austin Pubic Health drive-through site who test positive is decreasing ( t is now 2.32%, a few weeks ago it was 4.8%), however 6% of the Hispanic individuals tested there tested positive. At the Austin Public Health drive-through test site, 20% of the people who signed up for testing there are Hispanic, a disproportionately low rate compared to the overall Travis County population.

Escott said the high rate of Hispanic individuals testing positive at that site “indicates that we have pockets in our community with substantially higher risk of spread and experiencing high risk of transmission.”

“And we really are focused substantially on getting that under control making sure that outreach is appropriate and enhanced over the coming weeks so that we can gain control over that transmission,” he said.

Outreach to the Hispanic community

A city spokesperson explained to KXAN that the city and county have been conducting outreach to the Hispanic community and will continue to do so. The city has provided Spanish versions of city resources on its website and in places like grocery stores and churches, created flyers explaining things such as workplace best practices for preventing COVID-19 and what to do if you’re sick), developed an Univisión town hall, conducted interviews and announcements in Spanish, provided interpreters for 311 calls, translated social media posts into Spanish, and talked with community leaders to assist in sharing information about preventing the spread of COVID-19.
“I think they’re doing their part as much as possible,” said Paul Saldaña with Hispanic Advocates Business Leaders of Austin (HABLA).

“But there doesn’t seem to be an organized effort,” he continued. “If you continue to see an increase in Latinos and Hispanics over-represented in the people who are being affected and hospitalized with COVID-19, then clearly what we’ve been doing for the last five or six weeks is not working and something needs to change.”

Saldaña explained that he is hoping to see more direct outreach to Hispanic Austinites as well as direct collaboration between local governments and the groups already working with the Hispanic community in the area.
“The Latino community stands ready to help, we’re just waiting for there to be the ask,” he said.
Additionally, Saldaña cautioned against a “one-size-fits-all” approach for reaching out to the Hispanic community.
“Our community is not monolithic, we have at least 25 subcultures of the Latino community, we are not all Mexican or Mexican American,” he said. “And so there seems to be a void in the manner in which we are publically educating the Latino community.”
He said that public health efforts will have to take into account that some Hispanic Austinites may not have access to the internet. Ccampaigns will need to be creative to reach people who can’t go online.
“We have a large immigrant, undocumented community and then there’s concern about showing up to government tested sites,” Saldaña added.
Escott acknowledged that Hispanic residents in particular may not trust some of the COVID-19 outreach efforts from local governments. He encouraged county leaders to use their platforms to make sure people are aware of the public testing enrollment process, the CommUnity Care mobile testing sites.

“There’s not any catch to it, their name doesn’t enter into a database for detection by law enforcement, there’s not some secret bill that comes later,” Escott told commissioners. “It’s health information, it only comes to Austin Public Health and we need to continue to remove some of these perceived barriers. “

Saldaña also expressed concern about reported incidents of racist or discriminatory behavior toward Hispanic construction workers in Austin following reports about the risk of COVID-19 spread on construction sites. Those instances are something Gloria Leal has heard about, as well. Leal is the president of League of United Latin American Citizens (LULAC) Council 650 in Austin.
“It has been brought to my knowledge that some Hispanic construction workers when visiting their local convenience stores for lunch here were turned away…either because they are construction workers or Hispanics,” she said, noting that these workers did not report the incident because they are undocumented and feared retaliation.
Leal said that her council has “grave concerns” that reports which show high rates of Hispanic community members being hospitalized or testing positive for COVID-19 will trigger further discriminatory actions.
What she wanted to make sure that people understand is that “Hispanics are more likely to be in the essential worker category or the non-exempt category.”
“In Austin and probably in the state of Texas, it happens to be Hispanics on the front-lines,” she said.

Last week, KXAN reported numbers which showed that Hispanic and Black residents were both being hospitalized at disproportionate rates. 8.9% of Travis County’s population is Black and the updated numbers from Austin-Travis County for this past week show a decrease in the rate of Black residents being hospitalized at 6.2%
One caveat with the Austin-Travis County hospitalization demographic numbers is there still are many cases classified as “other” (14.1% of cases last week), which Escott explained are “data issues” which will need to be worked out in the process of comparing hospital data to epidemiology data.
When you look at the current number of confirmed Austin-Travis County cases of COVID-19 by race and ethnicity, Hispanic residents make up 51% of the cases — also a disproportionate rate.

Posted by Angela Valenzuela at 3:12 PM