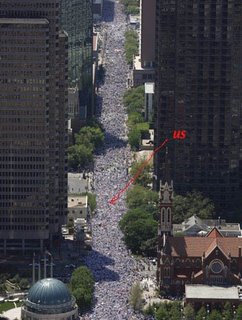 Here is an eye-witness account by Marc R Hairston of the march in Dallas last .

When you watch the news and see the stories about the huge
(somewhere between 350,000 and half a million people) protest in
Dallas today over the immigration legislation in the Congress,
look closely. Three of those tiny dots on your screen are Becky,
Beto, and myself.  (See attached picture)  We decided to take Beto
to his first protest rally and a good time was had by all.  Some
random observations.

We were going to take the DART rail line into downtown, but were
worried about the crowds coming back.  So we took the car thinking
we'd park on the outskirts of downtown.  Instead we got to four
blocks of downtown and could see the gridlock, so we pulled off
behind the Latino Cultural Center and parked on a sidestreet.

One the way down we saw a steady stream of folks walking towards
downtown on Ross and Live Oak.  Once we got out of the car we
joined the flow.

We tried to head to the Guadalupe Cathedral (the starting point), but
the police were directing the crowd to a point six blocks away.  They'd
already filled up Ross (we got there about 1pm) and were letting that
group move along and getting the newcomers to join at this point six
blocks away.

The paletas (popsicle) vendors were making a killing.  They were
everywhere on the route and at one point close to the end there
were some that had joined the march and were selling paletas "on
the run."

The other folks who made a killing were the t-shirt makers.  No one
was selling any there, but since they'd asked everyone to wear white
the various groups had premade t-shirts they'd distributed earlier,
all of them with sponsor names (law firms, resturants, organizations,
etc.) on the back.

There were US flags everywhere.  We only saw a few Mexican flags and
one El Salvadorean flag.  There was a native American tribe there with
their flag and dancing in costume.

This was definitely a family affair. There are not many marches where
about one of every 20 marchers was pushing a stroller.  Most groups
had some small kids with them.  Despite the sun, we only saw one mom
who had to stop to deal with a five year old's meltdown.

There were a lot of handmade signs saying things like "Wanting to work
and raise a family is not a crime" and my favorite: "We are all immigrants,
and so is our government."  If I had thought about it, I would have made
a sign with the best line I heard from a protest in Arizona: "*Real*
terrorists cross the Canadian border."

We went past several of the big, expensive hotels downtown on the
route.  Because of the march the police had closed all the streets
so the guests couldn't drive out.  It may have been an inconvenience
for the hotel managment and guests, but most of the hotel help were
out on the sidewalks cheering us on.

It wasn't as diverse as the organizers had hoped, but we were pleasantly
surprised to see a young woman dressed in a Muslim burka in the march.
As an anglo I was outnumbered by at least 200 to 1.  There is a Spanish
phrase about being a latino in an anglo setting, "mosca en la leche" or
"A fly in the milk."  Well I must have been a lump of non-dairy creamer
in the latte.

There was only one counter demostration we saw.  In a parking lot across
from the Trammel Crow building there was group of nine people with a
loudspeaker and signs like "Illegal = Criminal."  There were about
15 police officers around them and 30 feet of open space behind a
barricade between them and the marchers.  The marchers just chanted
"USA!" and "Si! Se puede!" (Yes, we can!) and laughed at them.  Beto
stuck his tongue out at them.

At First Methodist (a mostly anglo congregation) they had set up tables
and were passing out cups of ice water to the marchers.  That was a
nice thing to do (and they were the only outside group on the march
route to do anything for the marchers).

One nice touch was that about every five minutes the bells at the
Cathedral would be rung loudly, I guess like Father Hidalgo did
for the Mexican Revolution.

We walked down Ross to the West End, then doubled back to the City Hall
and got there about and hour and 15 minutes after we started.  We didn't
stay to hear any of the speeches, but walked back to the car.  (We'd
promised someone some ice cream if he didn't whine about his feet
being tired.)  As we got back to the east end of downtown where we
started we saw more buses pulling up with more folks getting out to
head for the starting point (at this point it was two hours since the
march started).  I suggested we go walk it a second time so we could
get counted twice, but Becky and Beto vetoed that.

Final thoughts: aside from one minor scuffle we heard about later between
counter-protestors and some marchers at City Hall, there were no problems
with the march (and even that didn't result in any arrests).  They managed
to get half a million folks in and out of downtown in one afternoon
peacefully and efficiently.  This is now officially the largest event
that has ever occurred in downtown Dallas (bigger even than the Superbowl
parades they've had for the Cowboys).  The news at 5:30 was commenting on
how deserted downtown was already.  I pointed out to Becky that this was
because *nothing* happens in downtown Dallas on Sunday afternoons.  ^_^
And finally, the Texas Democrats have been trying for decades to motivate,
mobilize, and politicize the latino population here, but with only so-so
results.  But with a single bill, the Republicans have succeeded in doing
all the hard work for us.  Thanks guys!

 
Photo: Dallas Morning News
Posted by Angela Valenzuela at 9:06 AM