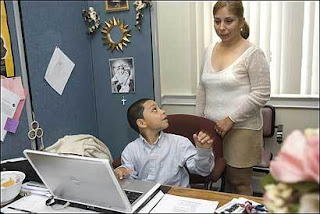 Yovanna Berges of Lawrence, who is a Spanish-speaking Peruvian immigrant, wants her 7-year-old son, Jordy, to retain her native tongue, though he also speaks English. (Jodi Hilton for The Boston Globe)

LAWRENCE -- After a lunch of hot dogs and rice, Jordy Berges blasted a ball off the wall of the lunchroom at his mother's office, his stomping grounds for the summer.

"No juegues aquí," Yovanna Berges scolded her 7-year-old son, telling him in Spanish to stop.

"Sorry," he answered her, in English.

Berges, an immigrant from Peru, is growing accustomed to such conversations with her son. She is struggling to raise him to speak English and Spanish fluently, which might not seem like a big challenge in the city with the highest proportion of Latinos in Massachusetts. But researchers say Berges and immigrant parents nationwide are confronting a difficult truth: Their children are losing their languages.

According to research presented to Congress in May, even the children of immigrants prefer to speak English by the time they are adults.

Rubén G. Rumbaut, a sociologist at the University of California at Irvine, and his team of researchers looked at 5,700 adults in their 20s and 30s in Southern California from different generations to see how long their language survived. A key finding centered on 1,900 American-born children of immigrants. The shift toward English among them was swift: While 87 percent grew up speaking another language at home, only 34 percent said they spoke it well by adulthood. And nearly 70 percent said they preferred to speak English.

"English wins, and it does so in short order," said Rumbaut, who presented his findings to the US House Judiciary subcommittee on immigration in May. "What we're talking about is a real phenomenon."

It is difficult for children to sustain their parents' languages amid the tidal wave of American pop culture, including movies and television, coupled with societal pressure to speak only English. Most schools and communities do little to preserve bilingualism, Rumbaut said. Even bilingual education programs, which Massachusetts voters dismantled in 2002, were commonly designed to help students make the transition to English-only classrooms.

Generations of immigrants have seen their languages fade, but Rumbaut said the cost is higher now as businesses expand overseas, the United States is more diverse, and national security agencies are clamoring for people who speak foreign languages. The children themselves are losing a skill that could give them an edge in the job market.

The erosion of language cuts across all backgrounds, Rumbaut said. In his study, less than 25 percent of the US-born children of Chinese, Korean, and Vietnamese immigrants said they spoke their parents' languages well. Chinese is one of the languages President Bush declared a priority for national security last year.

Spanish was found to survive longer, largely because Southern California is a high-immigrant area and Spanish is ubiquitous on television and radio and in newspapers.

While Rumbaut's study did not include Massachusetts, he said it was even more likely that language loss would occur here, because immigrants make up only 14 percent of the population, about half the percentage in California, meaning that children here have more exposure to English.

Until now, much of the debate over language has focused on the successful campaigns in Massachusetts, California, and Arizona to end bilingual education in public schools. Bilingual education was still strong in California when the participants in Rumbaut's study were young, but Rumbaut said English still prevailed.

In 2002, Massachusetts voters declared that all instruction must be in English, except for children on waivers that allow them to take bilingual classes and in a small number of schools that teach two languages simultaneously. Those programs, for example, teach English and a language such as Chinese, to native speakers of both.

Many Massachusetts parents and advocates say they are scrambling to keep children's native languages from slipping away. In Boston, advocates are pushing for more two-way schools. At Brockton High, children of Cape Verdean and Brazilian immigrants sign up for Portuguese lessons.

Even Rosalie Porter, an author of the Massachusetts initiative that dismantled bilingual education in schools, said she favors expanding two-way schools as long as parents want them.

Berges, who is married to an immigrant from the Dominican Republic, is raising Jordy in Lawrence, a majority Latino city, where 83 percent of schoolchildren speak another language at home.

Along Essex Street, one of the main thoroughfares, there are signs in Spanish advertising a store selling "Ropa para Caballeros," or men's clothing. Spanish-language newspapers abound.

But her son is fascinated by all things American, including Spiderman and hamburgers, and his communication with her reflects that. The other day he complained of a headache and said, "I have a pain in my cabeza."

Julia Sigalovsky of Sudbury, a scientist from Russia who arrived here in 1989, said she was stunned when her 11-year-old son suddenly refused to speak Russian after a few months in this country.

When she and her husband chatted in Russian at the supermarket, he was mortified. "Speak English," he told them.

With her second son, she tried harder. She sang him lullabies in Russian, hired a Russian-speaking babysitter, and inundated him with movies in her native tongue, like the Russian version of "Winnie the Pooh."

Now 14, he hardly speaks Russian, either. At home, the parents speak Russian and their sons respond in English. Even the family dog, answers to English. "We speak two languages," Sigalovsky said. "It looks totally insane for somebody who is watching."

While researchers and advocates agree that children of immigrants are losing languages, they disagree about what to do about it.

Porter, though she favors two-way programs, said English should be the priority of public schools. Parents can teach another language at home, she said.

Samuel Hurtado is coordinator of the Latino Education Action Network in Boston, where 39 percent of students speak another language at home, according to the state. Hurtado said the city should expand two-way programs so that children can maintain both languages. Many parents cannot afford luxuries such as tutors or trips abroad, said Hurtado, who plans to teach his 1-year-old son English and Spanish at home and enroll him in a Chinese immersion program in school.

"We talk so much about globalism, and we're missing a lot of opportunities for our children to be raised bilingual," he said. "This is becoming more of a class thing. When you go to the suburbs, parents get the value that it is to be bilingual."

Some parents say they are more concerned their children learn English than their native language. But Juanita Garcia of Methuen said she wants her children to learn Spanish so they can speak to their grandmother, who is visiting from Puerto Rico.

One day last week, all three generations went out for hamburgers. The parents and grandmother sat at one table and spoke Spanish; the teenagers sat at another and spoke English.

"I want them to have two languages," Garcia said in Spanish. "But all the time, they speak English."

Maria Sacchetti can be reached at msacchetti@globe.com.

Email ThisBlogThis!Share to TwitterShare to FacebookShare to Pinterest
Labels: bilingualism