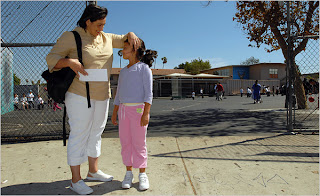 Axel Koester for The New York Times
Martha Sanchez, who has three children in Los Angeles schools, picking up her daughter, Catherine, a third grader. Ms. Sanchez said that as students grew older, the schools seemed to give up.

This account reveals the prevailing need that our nation has to invest in our schools. This punishing approach adds insult to injury. -Angela

By DIANA JEAN SCHEMO
LOS ANGELES — As the director of high schools in the gang-infested neighborhoods of the East Side of Los Angeles, Guadalupe Paramo struggles every day with educational dysfunction.

For the past half-dozen years, not even one in five students at her district’s teeming high schools has been able to do grade-level math or English. At Abraham Lincoln High School this year, only 7 in 100 students could. At Woodrow Wilson High, only 4 in 100 could.

For chronically failing schools like these, the No Child Left Behind law, now up for renewal in Congress, prescribes drastic measures: firing teachers and principals, shutting schools and turning them over to a private firm, a charter operator or the state itself, or a major overhaul in governance.

But more than 1,000 of California’s 9,500 schools are branded chronic failures, and the numbers are growing. Barring revisions in the law, state officials predict that all 6,063 public schools serving poor students will be declared in need of restructuring by 2014, when the law requires universal proficiency in math and reading.

“What are we supposed to do?” Ms. Paramo asked. “Shut down every school?”

With the education law now in its fifth year — the one in which its more severe penalties are supposed to come into wide play — California is not the only state overwhelmed by growing numbers of schools that cannot satisfy the law’s escalating demands.

In Florida, 441 schools could be candidates for closing. In Maryland, some 49 schools in Baltimore alone have fallen short of achievement targets for five years or more. In New York State, 77 schools were candidates for restructuring as of last year.

Some districts, like those in New York City, have moved forcefully to shut large failing high schools and break them into small schools. Los Angeles, too, is trying small schools, along with other innovations, and David L. Brewer III, its schools superintendent, has just announced plans to create a “high priority district” under his direct control made up of 40 problem schools.

Yet so far, education experts say they are unaware of a single state that has taken over a failing school in response to the law. Instead, most allow school districts to seek other ways to improve.

“When you have a state like California with so many schools up for restructuring,” said Heinrich Mintrop, an education professor at the University of California, Berkeley, “that taxes the capacity of the whole school change industry.”


As a result, the law is branding numerous schools as failing, but not producing radical change — leaving angry parents demanding redress. California citizens’ groups have sued the state and federal government for failing to deliver on the law’s promises.

“They’re so busy fighting No Child Left Behind,” said Mary Johnson, president of Parent U-Turn, a civic group. “If they would use some of that energy to implement the law, we would go farther.”

Ray Simon, the deputy federal secretary of education, said states that ignored the law’s demands risked losing federal money or facing restrictions on grants. For now, Mr. Simon said, the department is more interested in helping states figure out what works than in punishment. “Even a state has to struggle if it takes over a school,” he said.

A federal survey last year showed that in 87 percent of the cases of persistently failing schools, states and school districts avoided wholesale changes in staff or leadership. That is why, Mr. Simon said, the Bush administration is proposing that Congress force more action by limiting districts’ options in responding to hard-core failure.

In California, Jack O’Connell, the state superintendent of schools, calls the law’s demands unreasonable. Under the federal law, 700 schools that California believed were getting substantially better were counted last year as failing. A state takeover of schools, Mr. O’Connell said, would be a “last option.”

“To have a successful program,” he said, “it really has to come from the community.”

Under the No Child law, a school declared low-performing for three years in a row must offer students free tutoring and the option to transfer. After five years, such schools are essentially treated as irredeemable, with the law prescribing starting over with a new structure, new leadership or new teachers. But it also gives schools the option of less sweeping changes, like reducing school size or changing who is in charge of hiring.

Those in charge of troubled schools in Los Angeles admit that the absence of serious penalties coupled with the growing number of schools branded as low-performing is breeding bitterness. But they are not sure what to do.

Carmen Schroeder, the superintendent of District 5 — and Ms. Paramo’s boss — has taken over hiring decisions and keeps a close watch on the lowest performing schools. Ms. Schroeder said she would like to go further and shut some down if there were any place to transfer the students.

That is not so easy when 59 of the 91 schools in her district, the largest of eight in this sprawling city, consistently fall short of standards.

Beyond that, the federal law does not trump contract agreements, and so teachers have generally not lost their jobs or faced transfer when schools stagnate.

In Los Angeles, as the law’s 2014 deadline draws nearer, the promised land of universal high achievement seems more distant than ever.

Schools that serve low-income students are packed, despite new construction. In poor neighborhoods, students are on staggered schedules, starting school in different months and scattering what was once summer vacation into smaller breaks.

Students lose momentum, forget lessons and come out with 17 fewer days of instruction a year. “That’s why our kids are not passing the high school exit exams,” said Ms. Johnson of Parent U-Turn.

Not all states are facing huge numbers of failing schools. Some were late establishing testing systems, and so lack results over five or more years. Others may have small poor populations, better teaching or easier exams.

But the tensions voiced here are echoed by parents elsewhere, as well as by school officials.

At Woodrow Wilson High one recent morning, teachers broke into small groups over coffee studying test scores for areas of weakness. But there were limits to what they would learn.

“And who suffers?” asked Veronica Garcia, an English teacher at Wilson. “The kids suffer, because the teacher never gets feedback.”

A. J. Duffy, president of United Teachers of Los Angeles, said the union supported test score reviews provided they did not affect teachers’ jobs. Mr. Duffy said the federal law glossed over the travails of teaching students living in poverty. “Everyone agrees that urban education needs a shot in the arm, but it is not as bleak as the naysayers would have it,” he said.

That is not a view shared by many parents. Martha Sanchez, whose three children attend public schools here, said that as students grew older, the schools seemed to give up.

Her eldest, Gonzalo, attends eighth grade at John Adams Middle School, where only 22 percent of students passed the state exams in English and math this year. It is not hard for Ms. Sanchez to see why.

When Gonzalo struggled over equations, she said, his teacher called him slow rather than going over the material again. Ms. Sanchez said that she had complained, but that the teacher had denied the comment. It was only through the private tutoring, available under No Child Left Behind that he managed to pass seventh grade math, she said.

The principal, Joseph P. Santana, said he did not recall Ms. Sanchez’s complaining, but could not rule it out. “There are 1,600 of them,” he said, referring to the students, “and only one of me.”

Still, Ms. Sanchez is not a big fan of the law. Just weeks into the school year, she said, teachers are focusing almost solely on material likely to appear on state exams. Forget about igniting a passion in children, she said.

“Maybe the system is not designed for people like us,” she said.

Email ThisBlogThis!Share to TwitterShare to FacebookShare to Pinterest
Labels: NCLB