This is so horribly sad! -Patricia

PHOENIX — When Marco Carrillo, a naturalized American and a high school valedictorian, went to meet with his college counselor, her major worry about his future had little to do with his SAT scores or essay or extracurricular activities. It had to do with his citizenship. 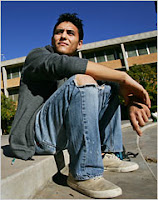 “The very first question she asked me was whether I was a legal resident here,” said Mr. Carrillo, 20, now an electrical engineering student at Arizona State University in Tempe. “And I said, ‘Yeah, I am.’ And she said, ‘Oh good, that makes things easier.’ ”

Such questions have become commonplace in Arizona, where voters passed a 2006 referendum, Proposition 300, that forbids college students who cannot prove they are legal residents from receiving state financial assistance.

One of several recent immigration statutes passed by Arizona voters and legislators frustrated by federal inaction, the law also prohibits in-state tuition for illegal immigrants. Administrators at several campuses fear that the provision has priced some out of their classes, particularly at the state’s popular community colleges.

“When we look at the fall semester that just ended, we saw significant drops in enrollment in English acquisition classes,” said Steven R. Helfgot, vice chancellor for student and community affairs at Maricopa Community Colleges. “And we think that some of that at least is due to Prop 300.”

A report to the Legislature in December found that about 1,700 students had been denied in-state tuition at the Maricopa colleges because they were not able to prove their legal status, though it was unclear how many had dropped out.

Officials at the University of Arizona in Tucson said that some of the 200 to 300 dropouts from last fall were also illegal immigrants. Pima Community College, estimated that as many as 1,000 students may have been affected by the law.

More than enrollment declines, however, what worries some educators here is that nonlegal residents — some of whom have lived in the United States since infancy and attended American high schools — will be afraid to pursue any form of higher education.

“The most frightening thing about the policy in place isn’t necessarily its measurable effect, it’s the immeasurable effect,” said Paul R. Kohn, the vice provost for enrollment management and dean of admission at the University of Arizona.

“It’s likely that there are hundreds of high school senior or college-age students whose plans for college have been compromised,” Dr. Kohn said. “And it’s likely there are thousands in K-12 who will no longer make those plans because the cost of university is now out of reach or they fear deportation if they attempt to attend school.”

The law does not forbid nonlegal residents from attending college or require colleges to report them to the authorities, something the colleges have worked hard to convey. Still, supporters said the law would save the state millions of dollars and provide a powerful disincentive to prospective border-jumpers.

“Arizona has been overwhelmed with illegal immigration and all the negative things that follow — crime, increased public service costs, especially education, and depression of our wages — and the federal government seems barely capable of doing much,” said State Representative John Kavanagh, a Republican from Fountain Hills, east of Phoenix. “Denying the in-state tuition, besides being fair to residents, also deters illegal immigrants from coming here.”

Arizona lawmakers have been increasingly active on the issue of immigration, moving National Guard troops to the border and passing a law that threatens businesses with the loss of licenses if they hire illegal immigrants.

The moves have disappointed many college-age Mexican-Americans.

“I see it as a very cruel law,” said Teresa Guerra, 26, a fourth-generation Mexican-American who is studying history at Phoenix College, a part of the Maricopa system. “A lot of people I’ve grown up with have gone through that whole thing. They’re raised in the American educational system, and now they have no future. These are people who have basically lived in America their whole lives, know nothing else, and now their shot at the American dream is gone.”

For students who cannot prove legal residency, the difference in cost can be stark. At Phoenix College, for example, a part of the Maricopa system, in-state tuition runs $65 a credit hour. For out-of-state students taking a full course load, the cost is $280.

The difference can be even more jarring at the state’s four-year institutions. Maria Elena Coronado, a student counselor at Arizona State, said out-of-state students could expect to pay $4,000 to $5,000 more a semester than those who proved legal residency.

“I had a girl come in yesterday, who doesn’t have papers, but did really well and carried good grades into college,” Ms. Coronado said. “But now she could only afford to take one class.”

Representative Kavanagh said the law’s intent was not to rob young, assimilated Mexicans of the opportunity to go to college, but merely to try to tame a problem Washington had not solved.

“I would be more than happy to take care of those kids who came here at a young age — they are as American as my kids and would be totally lost if they were deported,” he said, challenging Democrats in Arizona to draft a bill that “doesn’t have amnesty attached to it.”

“It’s expensive going to school in Mexico over there because there’s no such thing as financial aid,” he said. “You pretty much have to scrape it. But at least you’re not worried that you’re going to get deported.”
Posted by Dr. Patricia D. López at 9:43 PM