Colleges and Latinos have much work left 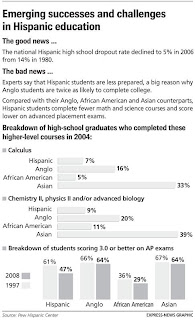 The number of Latinos dropping out of high school has been cut in half during the past 25 years, but great disparity remains when it comes to their college graduation rates, according to a study from the Pew Hispanic Center.

Richard Fry, the center's senior research associate, said Anglo students continue to be twice as likely to graduate from college as Hispanics.

"I'm not the first person to identify this issue," Fry said after a presentation Thursday at the University of the Incarnate Word. "Finishing high school is not as pressing an issue as it was 25 years ago," but the main challenge facing educators now is improving college graduation rates for Latinos.

"Increasingly in America, the real prize ... is not just going to college, it's who gets a bachelor's degree. That is the real fruit — the real plum — in American college education," Fry said.

Ruiz said in his era, the 1960s, "you had to search really hard to find Latinos on any campus.

"That's not as true today," he said. "People are providing access, and young Hispanics are getting into the system. The short end is that too many of them are going into remedial courses, and they're never coming out of that. And we need to fix that."

"We find that they do struggle, whether it's academically or financially," Macias-Castillo said. "They do struggle in the sense of trying to build more self-confidence."

In his study titled "Emerging Successes and Challenges in Hispanic Education,"Fry documented why Latinos are more likely to fail in college.

He said one major reason is Hispanic students are not getting the academic preparation needed to successfully complete college courses.

Although Fry said there are many indicators to show how students fare in high school, he based part of his study on an analysis of high school transcripts to determine if Hispanics were taking the rigorous courses needed to ensure their success.

He said the most recent statistics from the National Center for Education show fewer Hispanics are enrolled in advanced mathematics courses compared with Anglos, African Americans and Asians. The same is true for upper-level science courses.

Fry also said the percentage of Hispanics scoring 3.0 or better on Advance Placement tests has been on a downward trend, from 61 percent passing in 1997 to 47 percent in 2005.

"We've known for many years that the quality of the curriculum matters hugely," Ruiz said.

On the positive side, Fry said there is a growing movement — just like for high schools with the federal No Child Left Behind Act — to make colleges and universities more accountable in ensuring that all students succeed.

"This is going to be a growing issue, particularly in public universities, because state lawmakers hold the purse strings," he said.
Posted by Dr. Patricia D. López at 1:02 AM