Poll: 63% of Californians say they're worse off than year ago

Here's the link to check out the full report
-Patricia 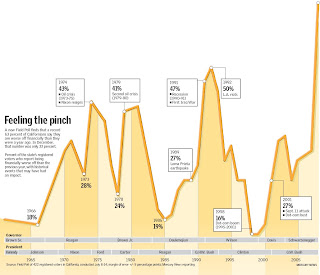 In a half-century of polling, the independent, non-partisan Field Research has never recorded so many Californians reporting woeful financial conditions as this month: A record 63 percent now say they are worse off than they were a year ago.

Eighty-six percent of registered voters surveyed this month feel California is in "bad" economic times, but those are only the numbers. The reality behind them affects the young and old, with retirees lining up for handouts for the first time ever, and children at risk of hunger.

Survey respondent Milton Cadena of San Jose has his own worries at home, then goes to work to face even greater desperation. As a manager for Catholic Charities, his salary from a non-profit agency has remained flat, forcing his wife to seek work instead of caring full time for the couple's two small children. The family gave up on new clothes, and no longer visits Santa Cruz and Monterey on weekends - instead walking to local parks to save on gas.

Arriving at work at the Eastside Neighborhood Center in Alum Rock, Cadena is among the fortunate. The number of senior citizens showing up for free lunches each weekday has doubled in the past year from 50 people to more than 100.

Young mothers and children have been turned away so often from the elders-only lunch that the agency launched an informal food handout with donations from local grocers. Now, more than 100 people regularly line up for eggs, tortillas, milk and juice.

"They are outside waiting for that food at least once a week," Cadena said.

In the latest of a series of survey results released this month, the Field Poll - which began polling in 1961 - found unprecedented expressions of economic hardship.

Almost half of all respondents expected no improvement in their crumbling financial state and nearly a quarter think it will get worse.

"This is really showing that the economic downturn is affecting a broad base of people, broader than we've seen in previous downturns," said Field Poll director Mark DiCamillo, noting gas prices and the plunge in stocks and home values as drivers of the economic woes. "People are seeing a lot of their assets deteriorate."

Even the relatively comfortable expressed concern.

Laura Dingler, a self-described stay-at-home mom, said life in unincorporated Menlo Park is fine - for now. Dingler and her partner, a lawyer representing area school districts, are raising their two daughters with no significant income reduction over last year.

But there's plenty keeping the couple "in a fog of nervousness," Dingler said.

Schools are so strapped they could soon cut back on lawyer services. And the couple's mortgage is with IndyMac Bank, which collapsed this month in a major bank failure.

The Field Poll found still others whose trouble had already blown indoors.

Menus have changed this year for Elizabeth B. Williams of Oakland, who retired from the dry-cleaning industry and at age 81 is raising an 11-year-old adopted daughter on a fixed income. For the first time in her life, she is relying heavily on charity.

"A year ago, I could afford to buy what I needed," Williams said. "Now everything is just sky-high."

Williams no longer can pay for a much-needed paint job on her house, and she can't fix a broken toilet. Dinner was sometimes steak or roast; now it's only beans and meatloaf, or the chicken legs occasionally handed out at the food bank she visits each week.

After a lifetime of work, it's humiliating, Williams said. "I feel very small. Very inadequate."
Posted by Dr. Patricia D. López at 11:09 PM

Email ThisBlogThis!Share to TwitterShare to FacebookShare to Pinterest
Labels: California