Too extreme is too nice a reaction. This is crazy! -Patricia 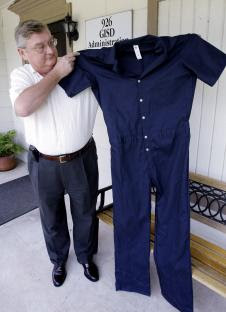 Larry Wehde, Gonzales Independent School District deputy superintendent, holds one of the jumpsuit options for students who don't abide by the dress code.


Parents say the inmate jumpsuit is too extreme for attire offense

GONZALES — Violating Gonzales High School's dress code is not a crime, but some of the offenders are about to start looking a lot like convicts.

Soon after classes begin Aug. 25, violators of the district's beefed-up dress code must don navy blue coveralls unless they get another set of clothes from home — or serve in-school suspension. The outfits aren't just styled like prison jumpsuits — they're actually made by Texas inmates.

The new policy in Gonzales, about 70 miles east of San Antonio, has drawn plenty of criticism — along with some speculation that all the district will accomplish is to set off a new fashion trend.

Some parents and students are crying foul.

"They're not little prisoners," said Mary Helen Douglas, who has a 17-year-old son starting his senior year.

The 2,650-student district has ordered 82 coveralls, which are most often sold to county jails, state mental institutions and juvenile prisons. School districts have bought lunch trays and similar items from inmate labor, but no other school district has ordered the jumpsuits in the last year, said Michelle Lyons, spokeswoman for the Texas Department of Criminal Justice.

The jumpsuits aren't the only option for dress-code violators from fifth through 12th grade. School board President Glenn Menking said parents can still bring a change of clothes, or they may request that the student go to in-school suspension instead.
Posted by Dr. Patricia D. López at 10:37 AM