Change for the better? 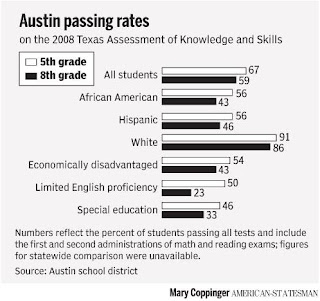 She paces, she shouts, she teases them, and she calls them out.

"Gentlemen, the day I wear a jumper and a little apple pin is the day you're back in the fifth grade and you can whine," Dobie Middle School teacher Holly Van Eis, dressed in a no-frills shirt and slacks, said to a classroom full of sixth-grade boys.

Getting the students engaged in the day's lesson — on differences between literal, inferential and thematic styles of writing — took a little strong arming, literally: "Seriously, do you want to arm wrestle?" she asked to one boy, a challenge that seemed to turn every head in the room. "You lose and you lose all bathroom passes for a week."

Dobie's experiment in all-boys and all-girls classrooms is one of the initiatives the Austin school district implemented this year as part of a middle school reform effort, a follow-up to the high school reforms that began in 2005 and brought smaller, career focused "school-within-school" environments to campuses.

The effects of the high school reform efforts are difficult to gauge overall, but Johnston High School underwent two major redesigns before the state closed the school in June after five years of low performance. And Reagan High School, one of several to implement the small-school and enhanced student advisory First Things First model, has not met state goals for achievement test passing rates and dropout rates for the past three years and faces possible closure in 2009 if it doesn't improve.

Al Summers, director of professional development for the Ohio-based National Middle School Association, said the problem with many of these reforms is that there is not enough research on any of them to say which are best.

"The one thing you can say (about middle school students) is that kids this age are really unique, and you need teachers who understand that," he said.

The Austin middle school reforms would create more specialized environments for sixth- to eighth-grade students — including proposals for an all-boys school and a nontraditional school that could, for example, have flexible schedules; an increased focus on professional development for teachers; and the spread of several teaching and student advising techniques that have proved successful at various schools.

The district expects to spend $1.37 million on the plan this year, of which about half will spent on teacher development and recruitment, particularly at lower-performing schools.

Middle school, education experts say, is a crucial time for many students. Average student performance on the Texas Assessment of Knowledge and Skills shows a marked drop when Austin students reach middle school: This year, 67 percent of fifth graders passed all tests compared with 59 percent of eighth-graders.

Paul Cruz, the district's associate superintendent of middle schools, said the middle school plan will focus on techniques that address the typical social and academic developments unique to early adolescence, such as tendencies to discourage parent and teacher involvement in their lives and struggles when it comes to controlling their behavior.

"Students at this stage of development learn differently, and we want to accept and take advantage of that," Cruz said. The district's 18 middle schools plan to continue a small schools approach that began several years ago by splitting students up into teams where groups of about 100 students within each grade share the same set of teachers to allow for better lesson planning and interdisciplinary collaboration, he said.

Across the country, districts have increasingly identified middle school as a place where reforms may have a bigger impact on long-term student success. One of the biggest reform trends — a requirement that all eighth-graders take algebra with the idea that having a firm grasp of its abstract concepts is critical to succeeding in high school — is being tried this year in California but has received a negative reaction from some educators who worry that students might be forced into a class for which they aren't ready. Others have tried extending the school day, beefing up their exercise and nutrition curricula, and even eliminating middle school all together by creating schools that go from kindergarten through eighth grade or from sixth to 12th grade.

In addition to the money being spent on teacher development and recruitment, more than $350,000 will be spent on programs for struggling learners and improving lesson designs with a greater focus on technology.

Another $150,000 will pay for a program to help elementary students make the transition to middle school and for family resource centers on five campuses, programs that were started in recent years at Pearce and Webb middle schools.

"You deal with a lot of volatility and a lot of change," said Russell Lyday, a Small Middle School counselor who served on a task force made up of educators and community members that helped craft the middle school plan. "The trick is finding ways to connect with these kids and channel that energy into the things that are ultimately going to make them successful."

Dobie was rated an academically acceptable campus in 2007 and 2008 under the state school accountability system after one year of performing below state standards. The school is now sharing with other district middle schools techniques that work.

The campus was the first to hold Student Data Conferences, now a requirement for all middle schools in the district. In the conferences, teachers meet with students and students and their parents at least once every six weeks to address challenges and to review benchmarks and test scores to track progress.

"We're like a physician," Van Eis said. "We do all the necessary diagnostics and blood work exams, so it's not just the parents, but the students who know what they need to work on."

The campus is also playing a lead role in the district with new teaching and learning techniques — such as with single-sex classrooms, something that has already been tried at the Ann Richards School for Young Women Leaders, the only middle school in the district to earn an exemplary rating this year.

Beginning this year, Dobie administrators put the majority of sixth-graders into all-boys and all-girls math and English classes, leaving some in traditional mixed settings as a comparison group to assess any differences in performance.

Van Eis approaches the boys and girls classes very differently: With the boys, she moves around a lot more, speaks loudly and makes a conscious effort to lighten things up.

"Boys don't hear as acutely, so I really try to project my voice. And they need more silliness, so I'll shake things up to keep them focused," Van Eis said. "With girls, when you re-direct them, it's 'Sweetie, I really need you to do this because ... .' With boys, you can be much more direct and blunt. There's usually no need for the explanation.

"Also with boys, you can call them out when they are messing up," she said. "But with girls, you do that, and they'll hold a grudge for six months."

Sixth-grader Robert Sanchez said he likes the change: "It's better because you can concentrate more."

Another program, Advancement Via Individual Determination, devotes one period in the school day for tutoring and college searches.

"These are students, who if they don't get started now, may not ever get the chance to go to college," Barrett said.
Posted by Dr. Patricia D. López at 6:46 PM

Email ThisBlogThis!Share to TwitterShare to FacebookShare to Pinterest
Labels: AISD