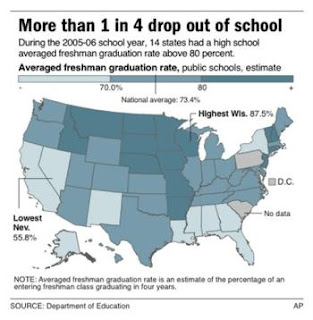 WASHINGTON (AP) — One in four students quits high school, a grim rate that will have to improve under new federal rules. Schools and states will now have to track and lift the graduation rates for all students, including minorities and students with disabilities, under regulations being announced Tuesday by Education Secretary Margaret Spellings. Among black and Hispanic kids, one in three drops out of school.

A school might have a high graduation rate but still have a low rate for black or Hispanic students or for kids with disabilities. Making schools responsible for progress in every group of students puts pressure on schools to improve.

The new rules are an attempt to extend the No Child Left Behind education law to the high school grades, and they come in the waning days of the Bush administration, which made the law a signature domestic achievement.

"No Child Left Behind is largely about grades three through eight — there's not a lot of power in the law as it relates to high school," Spellings said in an interview with The Associated Press.

"We haven't really tackled high school accountability, and this is a giant step toward doing that," Spellings said.

She was announcing the rules Tuesday in Columbia, S.C.

Under No Child Left Behind, schools have to meet annual targets for improving graduation rates.

But states are allowed to set their own targets for improvement. And more than half the states have targets that don't make schools get better, according to a study last week by The Education Trust, a children's advocacy group. In some states, all that's required is that schools don't do worse.

"The power of the spotlight is what's important about No Child Left Behind," Spelling said.

The new rules do two things to shine the spotlight on school dropouts:

_States must track dropouts, along with graduates and transfers, using the same reporting system. They currently use a hodgepodge of methods that make it hard to compare states, and the National Governors Association has recommended a uniform tracking system.

_Schools, starting with the 2012 school year, must meet those targets for minority groups and kids with disabilities, as well as for the overall student population, to satisfy the yearly progress requirements of No Child Left Behind. Schools that don't meet yearly goals for every group of students face consequences, such as having to pay for tutoring or replace principals.

Schools will be judged on whether children finish high school with a regular diploma in four years. The secretary of education will consider exceptions for kids who take five or six years to graduate, such as students who are learning English or those with disabilities.

But Spellings wants the pressure on schools to graduate students in four years.

"What's going on right now in our high schools is that kids, lots and lots of minority kids, don't get to the 10th grade," Spellings said. "Rome is burning."

Congress tried to address the dropout crisis as lawmakers prepared to rewrite the education law last year. But the rewrite stalled, and Spellings moved ahead with new rules.

Reaction to the new rules was a bit tentative on Capitol Hill, where No Child Left Behind has grown as unpopular as the lame-duck president who championed it.

Delaware Republican Rep. Mike Castle, a member of the House Education and the Workforce Committee, called the rules a "foundational first step."

He added, "The fact remains that No Child Left Behind as a whole is in need of reform, and I hope it is at the top of the agenda in 2009."

A warmer reception came from the lawmaker who helped Bush pass the law, Sen. Edward Kennedy, chairman of the Health, Education, Labor and Pension Committee. Kennedy spokeswoman Melissa Wagoner said the senator regards the rules as a "significant step forward."

"It's a disgrace that over 7,000 students drop out of school every day," Wagoner said. "The new regulations will allow schools to innovate while Congress works on new legislation to improve and strengthen the No Child Left Behind law."

The Education Trust, the group calling for more ambitious graduation goals, agreed the rules are a good foundation.

"But now we need to do the hard work," policy analyst Daria Hall said. "It's going to be up to the states to step up to the plate and set meaningful improvement targets and provide the support that students and schools need in order to meet those higher expectations."

Criticism has come from groups who say schools will be whipsawed between the outgoing Bush administration and a new White House, and new Congress, likely to create new graduation rules when they finally rewrite the education law.

"We don't think it make sense for the secretary to be putting out regulations less than three months before the Bush administration is going out of office," said Joel Packer, lobbyist for the National Education Association. The teachers union is a longtime critic of the education law.

"You're going to be getting huge levels of confusion and uncertainty, and at a time when there are significant budget cuts and pressures facing states and schools," Packer said.

The country's governors, while they proposed a uniform tracking system like that in the new rules, raised concerns when Spellings first proposed the rules in April.

Governors didn't envision the tracking system being used by federal officials to hold schools accountable, the NGA said at the time. The group has not said how it views the new rules.

Email ThisBlogThis!Share to TwitterShare to FacebookShare to Pinterest
Labels: Dropouts