One of the saddest stories on education that I've read in a long time.  To think that schools while pupils are in them are deliberate targets by extremists is enraging.

You can download the Education Under Attack 2014 report here. 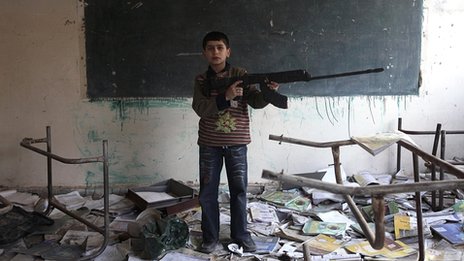 February 2014: Boy with a toy gun in damaged school in Deir al-Zor, Syria
There have been almost 10,000 violent attacks on places of education in recent years, according to the biggest ever international study of how schools and universities are targeted by acts of aggression.

These included the murder of staff and students and the destruction of buildings in bomb and arson attacks, in countries including Pakistan, Nigeria, Colombia, Somalia and Syria.

This stark account of violence against education between 2009 and 2013 has been published by a coalition of human rights groups, aid organisations and United Nations agencies.

The Education Under Attack report, published in New York on Thursday, reveals the extent to which education has been subjected to deliberate acts of violence.

These are not cases of schools and their staff "just caught in the crossfire", says Diya Nijhowne, director of the Global Coalition to Protect Education from Attack.
"They are bombed, burned, shot, threatened, and abducted precisely because of their connection to education."
Thousands of death threats There were 9,600 attacks worldwide, with incidents recorded in 70 countries, with the worst problems in Africa and parts of Asia and South America. There was a pattern of deliberate attacks in 30 of these countries, where such violence was used as a "tactic of war", said Ms Nijhowne.
These figures do not include the type of school shootings carried out against pupils and staff at Sandy Hook in the US in 2012. 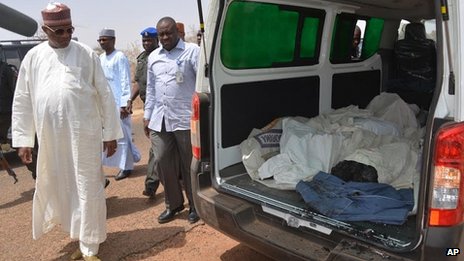 Students were murdered in an attack on a boarding school in Nigeria this week
The country with the greatest number of attacks was Pakistan, with the most common assault being the blowing up of school buildings.
Colombia was the most dangerous place to be a teacher, with 140 murders and thousands of death threats.
For school pupils, Somalia was the country where children were most likely to be pressed into becoming soldiers.
Syria's conflict has seen deadly attacks at universities in Aleppo and Damascus and there were high levels of attacks on students in Yemen and Sudan.
The perpetrators have included government forces, armed insurgents, terror groups and criminal gangs. They have committed murders, abductions and intimidation.
Controlling culture The shooting of Pakistani schoolgirl Malala Yousafzai by Taliban opponents of girls' education in 2012 focused global attention on such attacks on education.
But this study shows that this was far from an isolated case and that staff and pupils have been singled out for deliberate violence in many different conflicts and ideological battlegrounds. 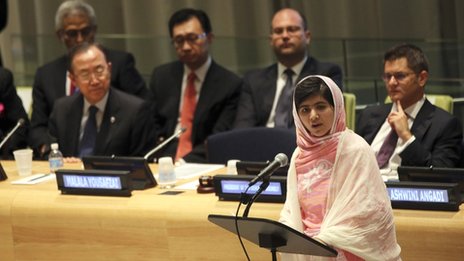 Malala Yousafzai addressing the United Nations about the right to education
This week in north-east Nigeria at least 29 teenage boys were killed in a massacre at a boarding school. Boko Haram, a militant Islamist group opposed to western education, is suspected of carrying out the attack.
The Education Under Attack report says that 30 teachers were shot dead in Nigeria last year, including some in front of a class.
Attacks on education can be a proxy for other conflicts, such as trying to undermine a government symbol or trying to promote a political, religious or ideological message or to terrorise another community.
In Afghanistan and Pakistan there have been violent attacks against the education of women.
Or else targeting students can be a way of pursuing a sectarian dispute. In Burma, also known as Myanmar, last year, a Buddhist nationalist mob set upon boys from a Muslim school, hacking dozens to death.
In 2010, in Iraq an escorted convoy of Christian students travelling to university were the victims of a car bomb attack.
Destroying skills There can also be more specific campaigns. In Mexico there were six bomb attacks on universities by a group opposed to nanotechnology research. 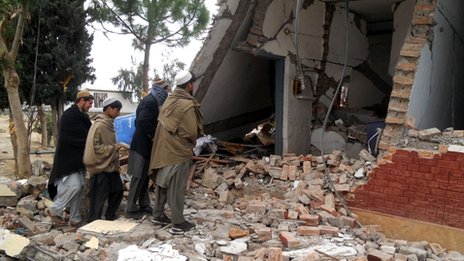 February 2014: School damaged by bomb in Tora Warai Pakistan
Teachers in Colombia have faced violence from armed groups, including rival paramilitary forces and criminal gangs.
As community leaders they are targeted by groups wanting to intimidate local people or to recruit school pupils into armed gangs.
The impact of violence can reach beyond the individual victims.
Terrorising academics and students in university can destroy the research capacity of an economy, warns the report, and trigger the departure of highly-skilled young people.
Intellectual curiosity and free speech, necessary in academic life, can be undermined by the threat of violence, with fear prompting "self-censorship" and a brain drain to other safer countries.
Occupying buildings There are also concerns about armed groups occupying educational premises, using them as barracks or training bases or sometimes as detention centres or even places of torture. 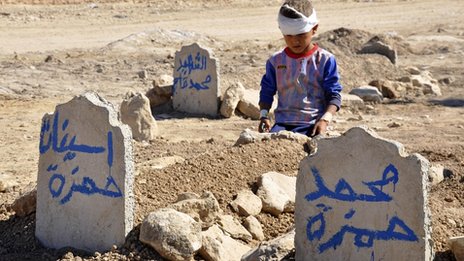 A car bomb near a school in Qabak, Iraq, killed this boy's brother and sister
In 24 of the 30 countries worst affected by attacks on education, there were cases of schools being taken over by military forces.
This also puts buildings at risk from attacks from opposing forces, says the report's lead researcher, Brendan O'Malley.
In Somalia, the report says, schools have been used as firing positions and faced incoming rockets, while the classrooms were still being used by pupils.
The study calls for the creation of "safe zones" around schools and wants combatants to recognise the need to protect places of education.
Mr O'Malley says a positive step would be a common agreement "not to use schools for military purposes".
There are also calls for a clearer path for investigating and prosecuting the perpetrators of acts of violence against schools and their staff and pupils.
As well as the loss of life, violent conflict is one of the biggest causes of a loss of education.
About half of the 57 million children without access to any school place live in areas disrupted by war and violence.
"It's not just the killings that spread fear and blight lives. The relentless destruction of schools in some areas of conflict is depriving whole cohorts of children of an education," says Mr O'Malley.
"There is a knock-on effect on social and economic development in places that can least afford to be held back.
"Where the government lacks the capacity or will to repair damaged schools, the effects can be felt for years after the attacks have happened."

Posted by Angela Valenzuela at 6:46 PM