The Economic Imperative of Bilingual Education

The Economic Imperative of Bilingual Education

States including Utah and Montana are aggressively pushing for programs that give native English speakers a competitive edge. 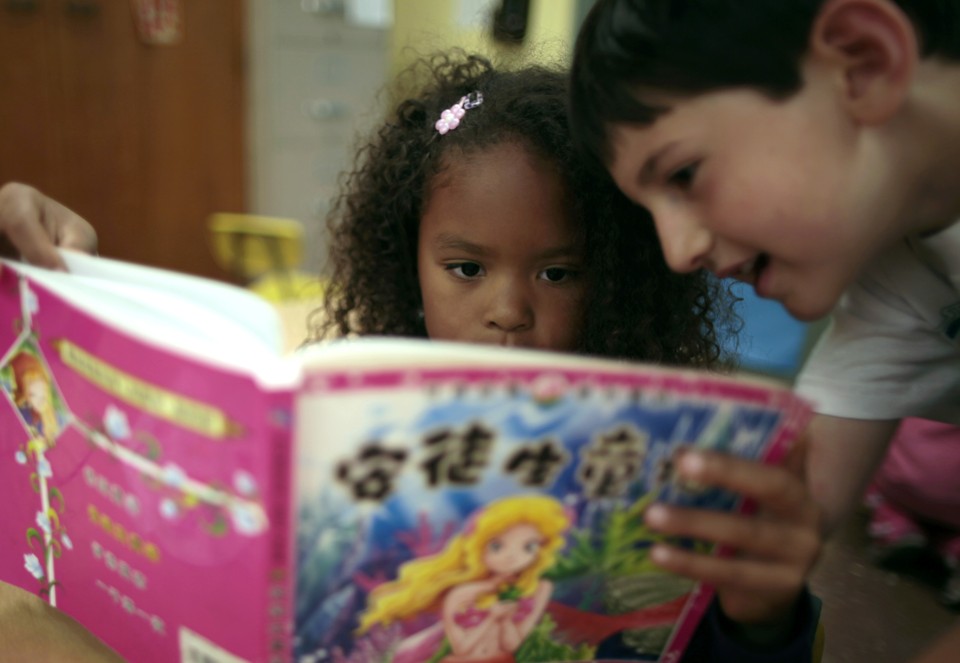 Garland Independent School District, a fast-growing suburb northeast of Dallas, has undergone a dramatic demographic shift. Like districts across Texas, Garland schools are blacker, browner, and more racially diverse than a generation ago. The multicultural panorama in Garland schools is reflected in its academic offerings. Still, in a school district with a Hispanic majority, and a state where more than a third of residents are Spanish speakers, Garland chose Mandarin Chinese as the focus of its newly launched language-immersion program at Weaver Elementary School. Increasing Garland students’ marketability in a global economy was the rationale. “It’s preparing students for the future and hopefully, lots of possibilities as they get older,” the school’s principal, Jennifer Miley, told the Dallas Morning News.


More on LANGUAGE IN EDUCATION

In a break with tradition, more schools are adopting language-immersion programs, in which English and another language are integrated into the curriculum and instruction. The Center for Applied Linguistics, a D.C.-based nonprofit, found an exponential growth in foreign-language immersion in a comprehensive survey of public schools and some private schools. Over a 40-year span language-immersion schools grew steadily, with the largest increase in the decade that started in 2001. Spanish remains the most popular for immersion programs at 45 percent, followed by French (22 percent) and Mandarin (13 percent), with a wide array of languages rounding out the list of 22 selections—from Hawaiian and Cantonese to Japanese and Arabic.

As two-way immersion grows, the variety of language options now available marks a turning point in the evolution of bilingual education. Once the mainstay of immigrant children, bilingual instruction has a new band of converts: English-speaking parents, lawmakers, and advocacy groups. Research shows that students gain cognitive and academic benefits from bilingualism. Yet an overarching reason for the heightened interest is giving U.S. students a jump on the competition in a global workforce. And some activists find even with this flurry of attention, equal access to dual-immersion remains a thorny issue and persistent challenge.

While many states, including Montana and Oregon, have fully embraced two-way immersion, seemingly none has adopted the approach with the intensity of Utah. In a fairly racially and ethnically homogeneous state, Utah invested millions in language immersion teaching Mandarin Chinese, French, German, Portuguese, and Spanish. Governor Gary Herbert set a target in 2010 for the development of 100 programs in intensive dual-language serving 25,000 students by 2015. Utah met that goal two years ago, and the brisk pace continues with the launch of additional programs.

Utah’s expansion of dual-immersion is designed with one major purpose: to make the state’s future workers attractive to global companies. Herbert boasted that Utah was responsible for one third of all Mandarin Chinese classes taught in America’s schools in February 2013 testimony to the U.S. House Education and Workforce Committee. His remarks highlighted the link between dual-immersion programs producing multilingual students and a workforce that attracts business to the state. Gregg Roberts, who oversees Utah’s dual-language initiative, expressed this same viewpoint to The Salt Lake Tribune: “The reason why we’re doing this during hard economic times is this is all about Utah’s future. We’re going to have a generation of kids to come that will really put Utah on the map and bring businesses here because it really is about [our] future economic survival.”
Utah’s goal is a critical issue nationwide. In an interconnected and rapidly changing world, many believe that America’s prosperity and economic strength depends on its students mastering a language other than English. Marty Abbott, the executive director of the American Council on the Teaching of Foreign Languages, says the U.S. is still far behind other developed countries in producing a multilingual workforce, due to “the Anglophone factor and Americans believing that English is good enough to get along.” Strides are being made, though, to close the gap. In the nation’s largest school system, New York City Schools Chancellor Carmen Fariña revealed plans in January to develop 40 new language-immersion programs this school year, citing the “global advantages of speaking more than one language” and her own experience as a bilingual adult. In promoting the study of foreign languages, Abbott finds parents who travel abroad for business and those who speak a language other than English, including heritage languages in the home, are the most vocal dual-language supporters. Advocates also received a high-profile endorsement in September when President Obama unveiled the “1 Million Strong” initiative with the aim of 1 million American students learning Mandarin Chinese by 2020; with 200,000 students now studying Mandarin, the commitment represents a fivefold increase.

A lingering concern as this trend takes hold, however, is how to ensure all students reap the benefits of foreign-language instruction, with bilingual skills sold as a win-win that bolsters academic and career outcomes. This is the driving force behind the D.C. Language Immersion Project, a grassroots group with hundreds of parents, educators, and community members working to expand immersion programs throughout the district, especially in Wards 7 and 8, which are home to some of the region’s highest poverty rates.

Once the mainstay of immigrant children, bilingual instruction has a new band of converts.
Vanessa Bertelli, the project’s executive director, points to an elementary-school bilingual-immersion program in Ward 7 approved for 2016 and “immersion … now mentioned by candidates for upcoming local elections” as signs of progress but “it is nowhere close to satisfying the demand,” she says. For every child matched with a seat in an existing immersion program in the District, there are five more children waiting for a seat, according to her group. “The jobs expected to grow most in the next 10 years are heavily related to languages—hospitality, tourism, marketing, and healthcare,” says Bertelli. “There needs to be more urgency around a long term strategy that will ensure that our D.C. kids can fill those positions.”
With the national attention on school segregation, language immersion is also viewed as a tool to entice more white, affluent parents to public schools. Incoming acting Secretary of Education John King was recently quoted endorsing language immersion with this objective in mind. “The diversity that exists in neighborhoods does not translate to the neighborhood schools,” Bertelli said. “The high desirability [of immersion programs] can act as a draw for families to give their neighborhood school a try.”

Notwithstanding the many positives of immersion instruction, factors such as race and class can also unwittingly pit relatively well-off English-speakers against students from historically marginalized communities. The resulting imbalance led Claudia G. Cervantes-Soon, an assistant professor of bilingual education at University of Texas at Austin, to take a closer look at these educational efforts. One of the critiques of traditional foreign-language education programs is that they don’t offer students enough opportunities to practice the target language in a more natural setting, she says, explaining that an important advantage of dual-immersion programs is giving English speakers the opportunity to interact with native speakers in authentic ways. These children’s linguistic strengths and cultural assets become important resources for English speakers to practice and develop their second language, which can lead to unintended consequences.
“When I started to visit classrooms, I was surprised by what I observed: Latino children from Spanish-dominant homes tended to be strikingly more quiet and subdued than their white English-dominant peers—who often and sometimes forcefully dominated classroom discourse,” says Cervantes-Soon. “Also, although language minority students generally did better academically in two-way immersion than in regular mainstream classrooms, their white English-dominant peers continued to outperform them.”
Cervantes-Soon cautions that the mutual goals of two-way immersion—bilingualism, bilteracy, academic achievement, and cross-cultural competencies—can mask the differences in the students served, who come to these programs with distinct needs, priorities, and access to resources. A key takeaway from her research is the need to make social justice a central goal of these programs, creating a space where students not only expand their linguistic skills but also learn to interrogate and examine ethnicity, social status, and other overlapping issues.
“When language is used simply as a marketable resource that the dominant group can acquire to increase global competitiveness, all while language minority students are pushed into English assimilation, an entire history of civil rights struggles is undermined and we may lose sight of the opportunity for a truly emancipatory education.”
Posted by Angela Valenzuela at 7:44 AM