The End of Public Schools?: The Corporatization of Public Education 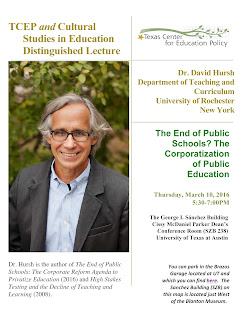 Over the last several decades the making of educational policy has been hijacked by unelected and unaccountable individuals and organizations that advance a corporate reform model based on a neoliberal philosophy emphasizing markets, privatization, individualism, and competition. Hursh provides evidence for the corporate takeover in the form of increasing influence of philanthropists, nongovernmental organizations, hedge fund managers, and corporations. As exemplars, he focuses on the influence of The Bill and Melinda Gates Foundation and the Foundation’s satellite nongovernmental organizations, Teach for America, and Pearson Education. He suggests that these organizations have gained control over policy making through the formation of tight networks in which neoliberal organizations cooperate in funding and promoting desired reforms.  Because these organizations work through one another often outside of the traditional political process, their efforts are often hidden from the public. In response, Hursh calls for a concerted effort to uncover and document the influence of neoliberal organizations, and the harmful effect their policies have on education, including the teaching profession and student learning. He ends  on an optimistic note by citing evidence of the growing resistance in New York among parents, students, teachers, and community members.

Biography.  David Hursh is a professor at Warner Graduate School of Education and Human Development, University of Rochester. His research and writing focuses on critiquing neoliberal education policy and practices, and educating for environmental sustainability. He books on education policy include The End of Public Schools: The Corporate Reform Agenda to Privatize Education (2016) and High Stakes Testing and the Decline of Teaching and Learning (2008). Publications on educating for environmental sustainability include Hursh, Henderson and Greenwood (2015) “Environmental education in the neoliberal climate” in the journal of Environmental Education Research, and Henderson and Hursh, D. (2014). “Economics and education for human flourishing: Wendell Berry and the Oikonomic Alternative to Neoliberalism,” in Educational Studies. From 2011 to 2012 he was a Visiting Research Scholar, Center on Globalization and Sustainable Development, Earth Institute, Columbia University. In spring 2014 he was Visiting Scholar at the University of Waikato, Hamilton, New Zealand.

Posted by Angela Valenzuela at 12:21 PM