Great summative quote in this on point article in The Hill written by University of Texas at Austin Department of Radio-Television-Film Professor Madhavi Mallapragada:

A monolingual (English-only) multiculturalism is limited, not to mention paradoxical. One big step towards an inclusive vision of multiculturalism in the U.S. would be to fully embrace its multilingual diversity. To move beyond rhetoric and towards respect and recognition.

I like that she calls out Tom Brokaw who disrespects all Spanish-speaking Americans (hear his comments here) and Barbara Ehrenreich for disrespecting one of my Netflix sheros, Marie Kondo. Here's another place where Ethnic Studies could have prepared Tom Brokaw and Ehrenreich, providing them with a deeper understanding not only of diversity, but also how racial, cultural, and linguistic purity are myths—and as a consequence, harmful. 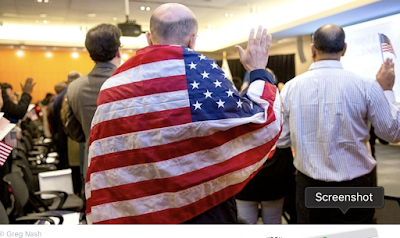 BY MADHAVI MALLAPRAGADA, OPINION CONTRIBUTOR — 03/19/19 09:30 AM
THE VIEWS EXPRESSED BY CONTRIBUTORS ARE THEIR OWN AND NOT THE VIEW OF THE HILL

Another day, another “speak English” demand. This time it was in El Paso, Texas, a border city that finds itself at the center of the current debates over national security and the border wall. In the viral video made of the episode, we see a man admonish a woman for speaking Spanish and demand that she “speak English.”
Unlike other viral “speak English” videos, where bystanders both record and speak up in support of the person speaking Spanish, in the El Paso instance, it is the woman herself who records the encounter and her refusal of the man’s demands to “speak English.” According to news reports, the woman is bilingual and the man is white.
What really underlies the demand to “speak English” however seems to have very little to do with whether bilingual immigrants of color can actually speak English. In fact in the El Paso video, the woman who is being berated for speaking Spanish eventually switches to English to address her harasser. Rather, the demand is really about the fact that a non-English language is being spoken in our public spaces.
Does the fact that our public spaces — streets, restaurants, universities and communities — bear testimony to a non-white, bilingual, immigrant culture trigger a racialized anxiety for many white Americans? The evidence suggests so.
More pointedly, the demand to “speak English” also demonstrates the limits of contemporary multiculturalism in the United States. While cultural diversity is often heralded as an American virtue, the reality often reveals, such as in these viral “speak English” videos, the discomfort with and even violence towards multilingualism in the nation. That reality begs the question: What does American diversity mean if linguistic diversity, the very facet of living in a multicultural society, can be so vociferously opposed?
In its short time so far, 2019 has unfortunately given us plenty of examples of the demand to “speak English,” occasionally coming from unlikely sources.
In early February, the noted liberal writer Barbara Ehrenreich stated in a now-deleted tweet,“I will be convinced that America is not in decline only when our decluttering guru Marie Kondo learns to speak English.” Enhrenreich  issued an apology of sorts after public outrage erupted over her comment but still maintained her discomfort that Kondo spoke in Japanese (with English subtitles) on her hit Netflix show, "Tidying Up with Marie Kondo."
A couple of weeks before that, Tom Brokaw said in a televised interview that Hispanics should do a better job of ensuring that their kids all learn to “speak English.” Doing so, Brokaw suggested, would help the immigrant group assimilate better into the United States. Brokaw has since apologized.
Brokaw’s apology came hot on the heels of another “speak English” viral story. This time it was leaked emails from a Duke University professor to Chinese international students in the professor’s department who she told in her email to “speak English” “100% of the time” they were on campus. The professor has also since apologized.
At an obvious level, the demand to “speak English,” is linked to the expectation that all immigrants assimilate. In the historical representation of America as a melting pot, assimilation is often addressed in the context of cultural assimilation and refers to the process in which immigrants leave their unique and distinct cultures behind and gradually adopt the values and cultural frames of the dominant society as their own.
In this frame, America is the “host” nation that is welcoming of new immigrants who, in turn, readily demonstrate their new identity as grateful immigrants by adapting to their new environment. In this context, speaking English is one key way in which immigrants might show they want to assimilate — and that they have.
Learning to speak English in an English-dominant country such as America is not in itself a bad idea. It is in fact a good idea and necessary to navigate life in school, at work, in the community. At the same time, in contemporary popular conversations, we see references to America as a salad bowl rather than a melting pot. The idea here being that instead of melting all our cultural differences, we celebrate our differences and our diversity.
Yet, despite the move to embrace diversity, we have to contend with the fact that in 2019, a woman in El Paso speaking Spanish in Cracker Barrel, Marie Kondo speaking Japanese on a Netflix show, Hispanics speaking Spanish in everyday spaces, international students speaking Chinese on a university campus, prompt demands to “speak English.”
The public engagement with a language that is not English is a reminder that the historically privileged location of English-centric white European culture in America is changing. For some, this shift is unsettling and triggers a number of responses. Some, as documented in the viral videos, are overtly anti-immigrant and xenophobic.
Others, such as seen in Ehrenreich’s tweet, are covert arguments about the primacy of a white, English language culture to the American nation. And others, like Brokaw’s remark, reveal how stereotypes about immigrants are reproduced in the guise of political commentary — that they don’t work hard enough, they don’t speak or want to speak English and that they are in fact unassimilable. That these demands to “speak English” are coming not just from conservative factions in the country but also from “liberal” quarters is a telling sign of the times we live in.
In an increasingly diverse America, culturally, racially and linguistically “different” immigrants are refashioning the American nation in new ways. That includes forging a diversity that is not just multicultural but also multilingual.
A monolingual (English-only) multiculturalism is limited, not to mention paradoxical. One big step towards an inclusive vision of multiculturalism in the U.S. would be to fully embrace its multilingual diversity. To move beyond rhetoric and towards respect and recognition.
Madhavi Mallapragada Ph.D., is associate professor in the Department of Radio-Television-Film at the University of Texas at Austin. She is a Public Voices fellow at the Op-Ed Project.

Posted by Angela Valenzuela at 10:41 AM