A rational solution to the border catastrophe

Check out this not only rational, but a simple and radical solution.  I'm reminded of a recent CNN Interview of Former Attorney General Eric Holder by David Axelrod where he was asked about working class white resentment.  He said that they would share a lot in common with many people of color, generally, and that they should join forces with them against the "fat cats" who do not need support.  That's the spirit of this piece.  Why not join forces on this one?

A rational solution to the border catastrophe 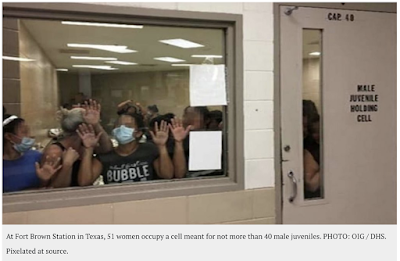 Despite massive public outrage, Trump announced he was going ahead with his intention of rounding up thousands of immigrants in cities around the U.S. starting on July 14. At this writing, this specific plan seems to have foundered — perhaps due partly to advocates who mobilized to spread information to immigrants around the country about their rights.
But raids and deportations are daily events, and they will continue in one form or another. Moreover, the administration is now moving to end asylum protections for most Central American migrants.
Trump is absurdly claiming “problem solved” as more people are tossed into the criminally overfilled prisons called detention centers. Photos of refugees packed into cages and children callously separated from their families show the devastation behind his sound bites.
Meanwhile, Democratic and Republican politicians bicker over exactly how deplorable the concentration camps are as both parties vote for billions of taxpayer dollars to the Border Patrol and ICE.
The refugees at the U.S.-Mexico border were forced there due to war, corruption, famine, drought, physical abuse and economic devastation. And they will keep coming until conditions change. In the meantime, U.S. businesses — in particular agriculture, the service industry and construction — desperately need these workers. (See “The case for open borders”.)
Lockdown at the border and raids in cities are used to terrorize undocumented workers and stop them from pressing for higher pay and decent working conditions.
Business owners don’t want immigrant laborers joining unions or organizing side by side with U.S.-born workers. The profit system relies on an underclass of workers who are low-paid, jobless, or underemployed, and have no protection to challenge inequality and misery. The threat of deporting these often militant workers is essential to the bottom line.
That’s why opening the borders is in the interest of every working and poor person. That means the raids stop and those who have been incarcerated are released. It means ending the militarization of the border and providing asylum for refugees.
The money spent warehousing human beings could be used to build much-needed infrastructure like low-income housing, schools, roads, medical centers, and mass transportation. The cash is there. In 2012, for example, the U.S. allocated $18 billion for border “security.”
And of course the damage created by current policies needs to be reversed. Families must be reunified. Children who were adopted out by predatory agencies or “lost” in custody must be found and returned.
Since the U.S. government has zero credibility in regard to caring for those it detains, independent international observers must be allowed to monitor and intervene as needed. Doctors Without Borders could assess what medical care is required.
This is a disaster created by capitalism that must be treated like the humanitarian crisis it is. Emergency relief now!
TO LISTEN TO THIS AND OTHER ARTICLES FROM THIS ISSUE, CLICK HERE.
Posted by Angela Valenzuela at 7:00 AM