Latino professors at the University of Texas are paid less, few are in leadership, study finds

When your brother-in-law texts you an article on inequities going on on your own campus, you know that word's gotten around. Glad to see NBC's Suzanne Gamboa write a really good review of the work by the Independent Equity Committee (IEC), all full professors, at UT-Austin.  The disparities are systemic and glaring—and our numbers are dropping.

This means that important research isn't getting done and that we're increasingly irrelevant despite our massive demographic growth.  This is not a good situation for our state to be in.  In fact, this is a crisis that must get remedied.

Latino professors at the University of Texas are paid less, few are in leadership, study finds

Latino professors earn $25,342 less than their white peers. and few are chosen as dean and other leadership positions. 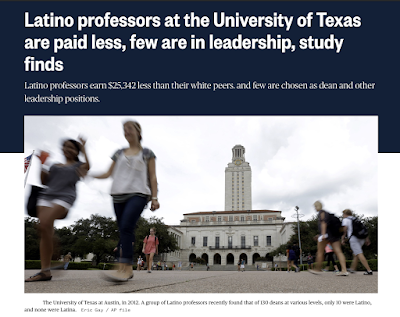 AUSTIN, Texas — The University of Texas, one of the state’s flagship universities, pays its Hispanic professors tens of thousands dollars less than white professors and rarely hires them as deans or for other leadership jobs, a group of Latino professors has found.
While the pay gap the professors uncovered has gotten the most attention, the few Hispanics serving as deans, associate deans or assistant deans exposes a deeper problem of institutional racism, according to Alberto Martinez, a history professor at the university and chair of the committee that produced the “Hispanic Equity Report.”
In January, the university located in Austin, Texas, had 130 deans, vice deans, associate deans and assistant deans. Of those, 10 are Latino. None are Latina.
“This is what we live in as Hispanics, as Latinos, and we are trying to bring it to the forefront. We need real inclusion in how university departments are run," Martinez said. "We have the same merits as other people in the university."
The committee analyzed thousands of pages of faculty résumés and found many Hispanic professors “eminently qualified” for the leadership positions, some with better résumés than faculty in the leadership jobs, Martinez said.
Related

NEWS
Forgotten history: Chicano student walkouts changed Texas, but inequities remain
The salary difference demonstrates disparity, “but the bigger problem is the lack of inclusion,” Martinez said.
The Independent Equity Committee at the University of Texas at Austin, made up of the eight Latino professors, presented its Oct. 8 report to legislators and their staffs at the state Capitol on Friday.
The professors want state lawmakers' to help make policy changes and order equity reviews of the university and the University of Texas System, Martinez said. The UT system includes 14 higher education, research and health care institutions.
Texas already is a majority minority state and according to projections, Hispanics will be the largest population group in the state by 2022. The state’s white population is projected to drop from 41.8 percent in 2018 to 28.6 percent in 2050, according to Texas Demographic Center data assembled by Rogelio Sáenz, dean of the College of Public Policy at the University of Texas at San Antonio.
“I am a full professor in the history department. I am No. 13 in productivity, articles and books and 34th in pay,” history professor Emilio Zamora said in video posted by KEYE-TV, the CBS affiliate in Austin. (The number one measure of faculty members' productivity is what they publish, and often they publish in peer-reviewed scholarly publications.)
Virtually all of the history department's 11 leadership positions have been held by non-Latino white faculty, with the exception of two that were held by Asian faculty members, according to Martinez.
Since publication of their report, the professors have heard from other Latino faculty at University of Texas at El Paso and University of Texas at San Antonio on issues on their campuses, Martinez said.
"Action is needed," university says

The communications office of Maurie McInnis, the university’s executive vice president and provost, said in a statement emailed to NBC News that the university is working to address many issues of faculty equity “echoed by this independent report” and to understand the source of the disparities.
The statement also said McInnis has asked deans to review their leadership selection and report on them to improve transparency on how the leaders are selected.
In an Oct. 18 email to the committee, McInnis told the professors: “You are right. Action is needed, and I’m committed to working with the campus to do so.” She added" “We are aware of the impact on Hispanic faculty and have begun work to address some of the concerns. Much work remains to be done.”
“As your report notes, the feeling of invisibility shared by some Hispanic faculty is not of their making,” the email states. “Rather, it is, at least in part, the result of a context that may fail to see them and validate their experiences.”
According to the committee’s study, the median compensation — salary and monetary supplements — for Latino full professors is $25,342 less than white full professors. Hispanic associate professors make about $10,647 less than their white counterparts, and assistant professors earn $19,636 less.
Latinas had the worst salary among all faculty, despite UT-Austin’s 2008 gender equity review to address pay for its female faculty. They also held the fewest leadership positions, according to the report.
There were 1,706 tenured and tenured track faculty at UT Austin in the fall of 2017 — the year the group used for its analysis. Only 119, or 7 percent, were Latino. Eight schools or colleges at the university had two or fewer Latino faculty members.
Nearly 85 percent of white and Asian faculty become tenured, compared to 62.5 percent of Hispanic faculty who apply and 76.3 percent of black faculty. The retention rate of Hispanic professors with tenure was 40 percent.
The university also rarely honors Hispanic faculty. Awards and endowments often include money and are part of the compensation for faculty. In 2018, at least 912 faculty or administrators received university funds from endowments, but just 5 percent were Hispanic, the report states.
The group analyzed chairs and professorships, which are the two types of endowments that have the highest prestige and the “largest accounts.”
Of 541 chairs and professorships, 18, or 3.3 percent ,were held by Hispanic faculty. In the past 62 years, the University of Texas System has given 929 campus-wide awards to its faculty. Thirty, or 3.2 percent, went to Hispanics.
Posted by Angela Valenzuela at 1:20 AM