Op-Ed: I’m an American in Italy, where 60 million are trapped by the coronavirus. It’s horrific

Check out this chilling, first-person account from Italy.  We, especially young people, cannot underestimate this virus. We cannot let this get out of hand.

Op-Ed: I’m an American in Italy, where 60 million are trapped by the coronavirus. It’s horrific 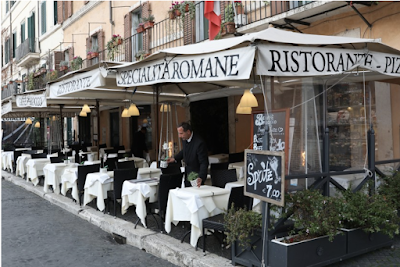 A restaurant in Rome prepares to close in response to the Italian government’s
nationwide lockdown to fight the spread of the coronavirus.
(Marco Di Lauro / Getty Images)

Under other circumstances, being homebound here might not seem a bad thing. Not for nothing is this stretch of the Italian Riviera called the Golfo Paradiso, the Gulf of Paradise. From our apartment, my wife and I look out at the Mediterranean, the nearby city of Genoa and the snow-capped mountains beyond. Now, with no one supposed to leave home, there are no errands to run, grace periods have been granted on mortgage, utility and tax bills. My shelves bulge with books that I now have more time to read.
But these circumstances are horrific. Italy is living through a national tragedy of incomprehensible proportions. More than 10,000 people here are ill with the coronavirus and more than 800 have died. Things could get worse, much worse, before they get better.
And no one knows when this will end.
This region, known as Liguria, is not the worst hit, but is just south of the areas that are. On Saturday, March 7, our streets and beaches teemed with tourists from the colder cities of the north. On Sunday morning, the government ordered the northern regions most affected by the virus sealed off. Two days later the whole country was locked down.
On Wednesday night, Prime Minister Giuseppe Conte announced the nationwide closure of all shops, except food stores and pharmacies. Now our streets and beaches are deserted, with most of the locals behind closed doors.
It has come to this even though Italy moved early and aggressively against the coronavirus threat with what it thought were strict measures of containment. When two travelers, who arrived in Italy from Wuhan, China, tested positive, they were quarantined and further flights from China were banned. When a new cluster of cases emerged in northern Italy in late February, the government moved quickly to blockade all areas of known infection, sealing off some 50,000 people in 11 northern municipalities. But what seemed unusually strict soon turned out to be not strict enough.
The virus had moved beyond a limited number of locations with a limited number of people who had been in direct or indirect contact with China or other foreign hot spots. It had turned into “community spread,” infecting people who had not traveled anywhere but had picked up the virus at the end of a longer chain of transmission.
Now the Italian government asks everyone in Italy to stay home, keep a distance of at least one meter from others, to not shake hands or hug when greeting people. It also advises washing hands frequently because the virus can stay alive outside the body and is present in droplets from coughing or even exhaling. A main route of transmission is when people touch surfaces that have virus-laden droplets and then touch their eyes, noses or mouths.
To be extra cautious, I chat with my neighbors mainly by Facebook Messenger to avoid face-to-face contact. Yet I am able to do full and frequent advisory sessions with graduate students at my university, hundreds of miles away, with Apple’s FaceTime. In the age of the internet and social media, isolation is not what it once would have been, at least for those with online connections.
MUSIC
Sick of singing ‘Happy Birthday’ while washing hands to fight coronavirus? Try these pop hits instead
March 3, 2020
There are huge economic and social consequences to shutting down a whole country of 60 million people, telling everyone to stay home and enforcing restrictions on even short-range travel.
But the most profound crisis, and the one that is driving the government toward all these restrictions, is the potential overwhelming of Italy’s hospital system, particularly intensive care. If not soon checked, this epidemic could lead to triage decisions that would potentially require rationing emergency care to those with the best underlying health and with the longest remaining life expectancy.
There is special concern about the virus spreading to southern Italy, with its lower number of current coronavirus cases but much thinner medical infrastructure. But local officials report that areas of the north, like Lombardy, are already close to being overwhelmed. And with Italian hospitals stretched to capacity caring for coronavirus victims, other medical needs are going unattended.
Italy is now a test case for the rest of Europe and perhaps the U.S. as well. Learning the right lessons from Italy’s current trials is now a matter of life and death.
David C. Unger teaches American foreign policy at Johns Hopkins University SAIS Europe and is author of “The Emergency State.

Posted by Angela Valenzuela at 6:32 PM