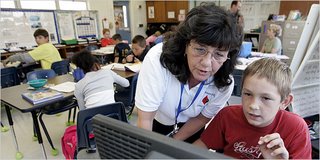 Well before President Bush signed his No Child Left Behind law, Jeb Bush poured his own ideas into a school improvement program for Florida.

Over the years since, Governor Bush has mostly held his tongue about the president’s very different law, even as detractors of all stripes have attacked it.

But in recent weeks--perhaps seeking to cement his legacy as a school-policy expert as he prepares to leave office-- Governor Bush has been speaking out about the federal law, mixing dollops of praise with measured criticisms--and taking an occasional potshot. He has been caustic, for instance, about the requirement that 100 percent of the nation's students be proficient in reading and math by 2014.

"I mean perfection is not going to happen," Mr. Bush said Sept. 12 at a news conference in Orlando, arguing that achievement targets are important but that unrealistic ones discourage educators. "We're all imperfect under God's watchful eye, and it's impossible to achieve it."

He followed up in an interview with criticisms of other provisions.

"With all due respect to the federal system," the governor said, "our accountability system is really the better way to go."

Other figures also say the federal law, which comes up next year for Congressional reauthorization, could use some improvement. But Bush vs. Bush may be the most striking part of the debate.

It is natural, of course, that the brothers might feel a bit of fraternal rivalry on this topic, because each built a political career --George in Texas, Jeb in Florida--around promises to improve their states' schools.

Still, this is more than a brotherly squabble, as Governor Bush's comments could well provide the president's opponents with ammunition against his signature law.

No Child Left Behind and the Florida law, the A-Plus plan, differ in many ways. For one, the federal law grades schools pass-fail, while Florida’s gives schools A to F grades.

One reason the governor may be wading into the debate over the federal law is that every year since it took effect in 2002, the school-grading systems have contradicted each other. Hundreds of schools have received an A from Florida while flunking under the federal system, often because they narrowly missed testing targets.

At the Orlando news conference, Paul E. Peterson, a professor of government at Harvard, urged Congress to make the federal law more like Florida's.

"Florida's school-grading system is clearly superior to the one used under No Child Left Behind," said Dr. Peterson, who with a colleague, Martin R. West of Brown University, expands on that argument in the current issue of Education Next, an academic journal.

In the article, Drs. Peterson and West described the federal system as so "badly flawed" that it might err with nearly 3 of every 10 schools it classifies as low performing.

The federal law also puts sanctions on schools that do not meet testing goals, but does not reward ones that do. The Florida law, on the other hand, gives large cash bonuses to schools that help low-performing students improve their scores.

In criticizing No Child Left Behind, Governor Bush signaled disagreement with the position staked out by Education Secretary Margaret Spellings, who told reporters on Aug. 30, "There’s not much needed in the way of change."

"I talk about No Child Left Behind like Ivory Soap," Ms. Spellings said. "It’s 99.9 percent pure."

Governor Bush said that when he had lunch in early September with Ms. Spellings in Washington "I was loaded for bear, to go in and say, 'What was that quote about?'"

"But she disarmed me completely before I got around to my attack," he recalled. "She is eager to reform, to reauthorize N.C.L.B. There’s still work to do, and she knows it."

In an interview, Ms. Spellings said that in characterizing the law as "99.9 percent pure” she meant to convey only that no changes were needed to its “core principles.” She cited several changes she hoped for, including extending the reach of the law into high schools.

Months after Governor Bush took office in 1999, the Florida Legislature approved his education plan. It requires schools to administer tests in reading and mathematics every year in Grades 3 through 10 and assigns grades based mainly on the results.

Two years later, a legislative audit found that the A-Plus plan was improving student performance, but noted a weakness in its comparing scores at each grade with the previous year scores from the same grade, measuring a different set of students.

Florida overhauled the plan to track the achievement of individual students from grade to grade, allowing the state to calculate how much specific students had learned in a given year. That has made it possible for the state, for instance, to reward schools for raising the achievement of the lowest-performing 25 percent of students.

No Child Left Behind has broad similarities with the A-Plus plan, but the two plans also differ in important ways.

Rather than tracking individual students, the federal plan measures whether schools have made "adequate yearly progress," based on whether the percentage of students who demonstrate proficiency at each grade level, and within racial and other groups, increases by a required amount. For example, the system, like A-Plus before its revision, compares scores this year from fourth graders with those from last year. The federal law took effect just as Florida was rolling out its revised plan. Sharp contradictions emerged almost immediately in many states between the federal and state ratings given to local schools.

These contradictions became especially notable in Florida in the summer of 2003, when 1,200 of the state's 3,050 schools earned A’s from the state. At the same time, more than 950 of the top-rated schools failed to make adequate yearly progress under the federal law. Similar discrepancies re-emerged in 2004, 2005 and 2006.

R. J. Longstreet Elementary School here in Daytona Beach is an example. The tidy one-story building near the Atlantic Ocean has fallen short on the federal yardstick every year, but Florida has given it an A for five years straight.

"Congratulations on your outstanding performance," Governor Bush wrote to the school.

But it fell short on 2 of 17 federal requirements, and that was enough to fail under the federal system. On a writing test administered to 55 fourth-grade students, 50 needed to show proficiency; 48 did. On math tests administered to 42 disabled students, 21 needed to score at grade level; 20 did.

Having failed the school four years running, each time because it barely missed a target or two, the federal law requires the Volusia County District to make plans this year to replace the staff at Longstreet or to undertake another form of corrective action, said Chris Colwell, a deputy superintendent.

"We’re not opposed to measuring achievement in our schools, but our point is, measure accurately," Dr. Colwell said. "Longstreet has a high-performing faculty. Why would we change them?"

In their Education Next article, Drs. Peterson and West used test figures to calculate how much students learned, on average, in each school in Florida in the 2003-4 school year and compared the gains in schools with adequate yearly progress with those in schools that did not.

The federal accountability system does not perform as well as Florida's "in distinguishing schools where students are learning more from those where they are learning less," the professors wrote.

At the Sept. 12 news conference, called to publicize a broad review of education initiatives, Governor Bush listened approvingly as Dr. Peterson praised the A-Plus plan and criticized No Child Left Behind. But the governor has been careful to note what he considers to be the federal law’s contributions.

He approaches the law, he said, "not from the standpoint of saying it's bad, but that it's good and needs to be better."