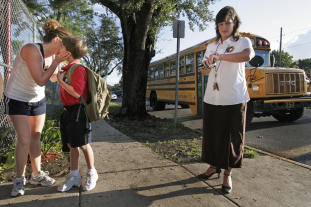 NEW ORLEANS — If the world is a laboratory, New Orleans is a petri dish.

The city, notorious for having one of the worst public school systems in the country, has emerged from the aftermath of Hurricane Katrina as an experiment in education: Privately run charter schools, relatively limited before last year's storm, now outnumber government-run public schools.

And the numbers could rise as the demand for quality schools grows in this still-recovering city, state education officials predict.

"Suddenly, there's an opportunity to improve the community and education as a whole," said Robin Jarvis, who oversees the state-run school district that took over most of the city's public schools after Katrina. "I think largely, before, they'd given up."

Since Katrina, fewer than half the city's public schools have reopened. Of the 53 that have opened, 17 are run by the state, five by the cash-strapped local school board and 31 by charter groups. Total enrollment, now at about 25,000 students, also is less than half of what it was before Katrina, officials say.

People on both sides of the charter debate are watching what happens closely for evidence to bolster their theories that giving parents choices in public education pays off in student achievement — or that relying increasingly on independent, nonprofit groups to teach children is a dicey proposition.

A recent federal study — downplayed by a U.S. Education Department official as a snapshot in time — found that fourth graders in traditional schools did better in math and reading than students in charters.

Supporters promote charters as a step toward strengthening the city's educational system, while critics see them as eroding what's left of traditional public schools. The National Alliance for Public Charter Schools has called New Orleans the closest the country has come to an all-charter district.

"You had a natural disaster in New Orleans," said charter critic Nat LaCour, secretary-treasurer of American Federation of Teachers. "Now what's happened in New Orleans is a man-made disaster."

Charter schools receive public funding and generally accept a wide range of students. The schools have caught on in parts of the country where traditional public schools have faltered, such as Washington, D.C. Their charters can be pulled if progress isn't shown in test scores.

Parents like Debbie Williams say they're pleased so far.

"They're extremely organized," she said after dropping off her daughter, a first-grader, at Alice Harte Elementary recently. "It's early, but I have faith they're going to do well."