By Greg Toppo, USA TODAY
WASHINGTON — If public schools were baseball teams, says Sam Chaltain, Americans wouldn't have a clue who should be in the playoffs.

That's because our current rating system relies heavily on a single set of test scores for nearly 50 million students, showing how a sample of them perform on a one-day math or reading test each spring. 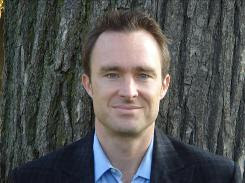 Sam Chaltain of the Forum for Education & Democracy says that "testing is overvalued."

To Chaltain, director of the Washington-based think tank Forum for Education & Democracy, that's like picking playoff teams based on one game's box score.

As Congress gears up to reauthorize No Child Left Behind (NCLB), the 2002 law that spells out how federal, state and local governments rate schools and spend billions of dollars, Chaltain is leading a new and unlikely campaign to shift the USA's education conversation away from one-day tests and toward a larger one, focused on "powerful learning and highly effective teaching."

The forum, along with a handful of education and civil rights groups, launches an online campaign today, asking Americans to write in with personal stories about how and when they got excited about learning — did a teacher get you interested in dinosaurs when you were 9? In politics when you were in middle school? The forum will present it to lawmakers as they rewrite the law.

In its current incarnation, NCLB, which uses the tests to prod improved achievement of low-income and minority students, requires virtually all students in grades 3 through 8 (and one grade in high school) to take annual, state-approved math and reading tests. Based on the percentage of students who score "proficient" or higher, schools get ratings that affect how they can spend federal dollars and whether teachers and administrators keep their jobs. Other factors, such as attendance and graduation rates, matter to a lesser degree.

The new effort aims to change the focus of the reauthorized law.

Chaltain, 39, an author and former teacher who spent five years with the Freedom Forum, a non-profit free-press foundation, says he wants to create "a true marketplace of ideas" open to thinkers of all persuasions.

The group is already talking to lawmakers about research-based revisions to NCLB that shift the focus away from testing toward longer-term measures of learning.

"Most countries around the world do this already," he says. "We're one of the dinosaurs."

A new campaign will collect personal stories of "powerful learning." Here's an excerpt from a story submitted by U.S Secretary of Education Arne Duncan about his mother's after-school program:

The campaign's website is RethinkLearningNow.com.
Posted by Dr. Patricia D. López at 5:20 PM

Email ThisBlogThis!Share to TwitterShare to FacebookShare to Pinterest
Labels: Forum for Education and Democracy, testing