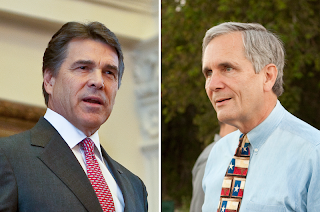 
In a victory for Gov. Rick Perry, the most recent congressional budgetary stopgap — passed Friday night to avoid closing the federal government — contains language that repeals the "Save Our Schools" amendment from U.S. Rep. Lloyd Doggett, D-Austin. The measure would have prohibited Texas from using federal dollars to replace state funding of schools.

Last summer, Doggett and other Democrats in the House supported an amendment to a bill allocating $10 billion in federal funding for education that said Texas couldn't use its portion — $830 million — to supplant rather than supplement state public education money. Because Perry refused to guarantee future funding without the permission of state lawmakers, the Department of Education denied the Texas application for money. In a Jan. 10 New York Times letter to the editor, Doggett wrote that he worked to pass the measure because Perry and state lawmakers used $3.25 billion in federal stimulus dollars marked for education to replace state funding for schools in 2009.

In an emailed statement today, Doggett said that the repeal was "one of many unwise concessions" to Republicans to avoid the government shutdown. He also noted that the state Legislature — where budgets from both the House and Senate already include the money — could still achieve the amendment's original purpose if it avoids using money to replace state funds.

The Texas congressional delegation, divided along party lines, has quarreled about the amendment since its passage. All 22 of the state's GOP members, led by U.S. Rep. Michael Burgess, R-Lewisville, signed on to a repeal bill earlier this year. Republican Sens. John Cornyn and Kay Bailey Hutchison introduced a similar bill in the upper chamber, and Texas Attorney General Greg Abbott, a Republican, filed suit to get the money without the strings attached. In his February State of the State address, Perry referred to Doggett as "a certain Texas congressman who singled out our state for punishment in pursuit of his own agenda."

“Petty politics have no place in what should be an otherwise simple equation that fairly distributes federal education dollars to each state," he said. "Texas schools were unfairly penalized and left in the dark during one of their most challenging budgeting years to date. I’m relieved this has been resolved and hope these resources make their way to Texas classrooms as quickly as possible.”

Removing all accountability on Gov. Perry's use of $830 million of federal aid to education by repealing the “Save Our Schools” Amendment is one of many unwise concessions made to Republicans to avoid their threatened government shutdown. If this federal money is added to the funding for our schools contained in the state Senate Finance bill, our purpose can still be achieved. If it simply replaces proposed state funding, then the concern of state educators, who sought our amendment, will be justified. Our sole objective has remained to ensure that federal aid to education actually aids local Texas schools with additional help rather than being diverted by the state as occurred in 2009 with $3.25 billion of federal aid. The Governor and the Legislature still have the power to do right by our Texas children.
Posted by Dr. Patricia D. López at 9:38 PM