In Texas, Debating the Value of Academic Research 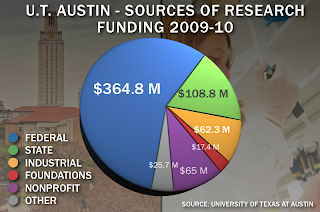 He was heading the Microelectronics and Computer Technology Corporation, a new consortium of computer and semiconductor companies, and was looking for a place to locate. He recalls that 57 cities in 27 states bid for the company. On that particular day, Inman and others with the consortium were in Chicago to hear pitches by cities from six states. Texas was one of the later presentations.

Inman says the Austin Chamber of Commerce representative went on almost too long. He was saved by the presentation that followed: a professor of electrical engineering from UT who talked about the research he was doing on what is now the J.J. Pickle Research Campus. The CEO of one of the semiconductor firms leaned over to Inman and remarked that he’d particularly like to hire students who worked with such a professor.

“That’s when it first really came home to me that what really attracted industry was the potential of access to students who had come through superb programs,” Inman says. Ultimately, Austin was selected as the location for MCC, and other corporations soon followed suit.

Today, at UT and in higher education around Texas, academic research is under fire — or at least it is perceived to be by prominent members of the UT community. Along with some lawmakers, they have expressed concern about the influence — at the UT System Board of Regents and elsewhere — of the Texas Public Policy Foundation, a conservative think tank that advocates emphasizing teaching over research at universities.

Academics and top university administrators, meanwhile, have argued that research and teaching are inseparable. Nobody has questioned the value of teaching, of course, but sensing that research is threatened has sent the community into high alert. The funds that sponsor research can also be key sources of financial support for faculty and facilities. And some argue that the benefits of research extend beyond the bounds of the university campus. According to UT spokesman Don Hale, research activities at the university have a $1.9 billion impact on the state’s economy annually, accounting for a total of 10,500 jobs.

Despite the dramatic tenor of the current conversation, publicly there appears to be near unanimity in support of the broad concept of academic research, especially as it relates to the business environment. Drilling down, though, into specific types of research reveals a deeper split.

Higher education reform advocate Rick O’Donnell, who once authored a white paper for TPPF titled “Is Academic Research a Good Investment for Texas?” and whose recent hiring by the University of Texas System served as the flashpoint for the current debate, clarified in a recently published letter, “I understand and support the value of research, including basic research, and the central role of research universities in the science and technology eco-system that is the backbone of America’s economic role in the world.”

However, he added, “I also am unafraid to look at the data, ask hard questions around productivity, cost-benefits and accountability because I think it is possible to measure the value of research to our common weal."

Another TPPF senior fellow and higher ed reformer, Richard Vedder, an economist at Ohio University and author of books such as Going Broke by Degree: Why College Costs Too Much, says he is “a great believer” that research is one of the core functions of higher education. But, especially at public universities where taxpayer funds are involved, he favors examination of expenditures. And, when you look at it, he says, “There’s a lot of research that could be questioned.” He notes, “This is probably particularly true in the social sciences, the humanities, and in certain vocationally oriented disciplines — people writing papers on marketing, for example.”

Most research funding goes to science and engineering departments. From 2009 to 2010, UT’s sponsored research funding — which included money from the federal stimulus package — totaled $644.3 million. Of that, only $27.4 million went to the College of Liberal Arts. By comparison, $130 million went to the College of Natural Sciences. (See complete list below.)

Still, even some of the staunchest defenders of traditional higher education institutions question the value of the status quo of research-dominated academia. John Silber, a former UT dean and longtime Boston University president and chancellor, recently told The Texas Tribune that universities were being harmed by the push for every professor to publish research articles, noting that many of the products of such research ultimately “aren’t worth anything.”

Inman supports a university model that allows for constant attempts to push academic boundaries. He cites the tradition of Vannevar Bush, an engineer and inventor who promoted research on a national scale during and after World War II. “One thing he brought from the beginning,” Inman says of Bush, “When you’re pushing the frontiers of basic, you do not know what will come out of it, and some of it may have direct relevance and some may not.”

But Vedder worries that academic research is trending toward the excessively narrow and becoming more of a stepping-stone to promotion. “We almost reward people for not reaching out to a broader public,” he says. “That, I think, is an increasingly dubious line to take in a world where resources are extremely scarce.”

As the topic of research was heating up in the Austin higher ed community, UT issued a press release announcing the findings of some faculty researchers. The headline of the press release: “Beautiful People Are Happier, Economists Find.”

It’s not exactly the sort of thing that attracts major corporations to relocate to Austin.

But author Daniel Hamermesh says, “I think it’s very, very relevant. I would defend it to the hilt.” It actually quantifies beauty’s benefits, notes the differences for men and women, and observes how these effects work in markets, including the labor market and the market for spouses. Hamermesh notes that French President Nicolas Sarkozy and Nobel Prize-winning economists like Joseph Stiglitz have advocated for including happiness as a measure of countries’ success — a practice his research calls into question.

Here is a complete list of colleges and units receiving research funding at UT from 2009 to 2010:

Office of the Vice President for Research Units: $182.8 million

Office of the Dean of Undergraduate Studies: $400 thousand
Posted by Dr. Patricia D. López at 9:28 PM