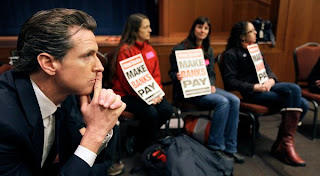 Lt. Gov. Gavin Newsom joined a group of protesters on Monday after they disrupted the University of California Board of Regents meeting in San Francisco and conducted a meeting of their own.

Dozens of chanting protesters disrupted a public meeting of the University of California Board of Regents on Monday, driving all but one of the regents from the room.

“What the hell,” said Lt. Gov. Gavin Newsom, a regent by virtue of his office, as he flashed a smile and strode past nervous police to mingle with protesters.

While other regents at the meeting in San Francisco huddled behind closed doors or waited at a safe distance on a teleconference call, Mr. Newsom sat forward in his chair, surrounded by students and faculty members railing against a raft of ills: rising tuition, mounting student debt, grim job prospects and accusations of police brutality.

When he finally spoke, Mr. Newsom thanked the protesters for “restoring my faith and confidence in this state and country.” He added, “You have my support.”

And, no doubt, he would like theirs in return.

With the University of California and the California State University systems convulsing over increases in tuition and the ensuing protests at several campuses, Mr. Newsom has staked a position as a populist champion for students, a key part of his base that will be critical if, as expected, he seeks higher office.

“Gavin is speaking from the heart, but it also makes sense for him politically,” said Nathan Ballard, a former press secretary and an aide to Mr. Newsom.

In an interview Thursday, Mr. Newsom said he was deeply alarmed by what he called the dismantling of the U.C. and C.S.U. systems and gently criticized the budget deal struck by Gov. Jerry Brown last year that included steep cuts to financing for both institutions.

“You can’t cut $650 million from both systems and tell me you value the system,” he said. “I believe we could’ve avoided a substantial portion of these cuts.”

He added, “If I were governor, I’d take that as a critique, but I stand by it.”

While Mr. Newsom, 44, has grabbed headlines by criticizing tuition increases and cuts to state spending on education, Governor Brown, a fellow Democrat, has been wrangling for months with the Legislature over a pension overhaul and proposed taxes to help finance education.

Mr. Brown was on vacation last week, and aides had to address criticism that he failed to swiftly address incidents in which campus police used pepper spray and riot batons to quell student protests at Berkeley and U.C. Davis, incidents that were condemned by Mr. Newsom and John A. Pérez, the Assembly speaker and a U.C. regent.

Mr. Newsom told The Sacramento Bee last week that the relationship between a governor and a lieutenant governor was typically “difficult.”

But on Tuesday, Elizabeth Ashford, a spokeswoman for Mr. Brown, said the governor and Mr. Newsom had a “shared concern” over the tuition increases.

“The governor’s position has always been that without additional revenue coming into the state we’re faced with some terrible choices,” she said. “The lieutenant governor is very aware of the very serious fiscal realities that are facing the state.”

“The easy part is to condemn tuition increases; the harder part is to decide how you’re going to offset those increases with revenue augmentation,” Mr. Gerston said. “Jerry Brown has to be the conductor and make all the pieces come together. Gavin can be a star performer, but he’s just one instrument in a 60- or 70-piece symphony.”

Although Mr. Newsom sees higher education as an issue within his purview as regent, the latitude the governor allows him will be scrutinized because Mr. Newsom has been openly frustrated by the limited scope of his office.

When he briefly ran against Mr. Brown, 73, in the gubernatorial primary last year, Mr. Newsom repeatedly emphasized his youth and questioned the “fire in the belly” of Mr. Brown.

During Mr. Newsom’s campaign for lieutenant governor, “much of Gavin’s support came from the younger generation,” Mr. Ballard said. “He’s certainly speaking to a demographic that will help him in the future.”

In fact, advisers who cultivate Mr. Newsom’s social media presence are quick to note that the majority of his followers on Twitter and those who “like” his Facebook page are young.

Mr. Newsom’s supporters say that he has always backed students’ causes, and that his outspokenness underscores his integrity and his image as an iconoclast.

In 2004, Mr. Newsom riled elders in his party when, as mayor of San Francisco, he issued marriage licenses to same-sex couples despite a state ban.

“He’s always had a ‘damn the political torpedoes’ attitude and a willingness to take on tough issues,” said Peter Ragone, a close political adviser to Mr. Newsom.

As the matter of tuition increases and cuts to education spending has gained prominence nationwide, Mr. Newsom has stocked his official Web site with press releases calling for more transparency around spending decisions.

At Monday’s regents meeting, he declined to sign a petition calling for state lawmakers to close corporate tax loopholes, among other proposed changes in the tax code, but pledged his support for the initiatives.

“I think it’s a lot better than any signature," Mr. Newsom said, adding that he was working with Mr. Brown to devise various changes in tax laws.

Mr. Newsom is not the only U.C. regent to express support for students. On Monday in Los Angeles, for example, Sherry Lansing and Eddie Island met with protesters for 45 minutes after the latter disrupted the regents’ conference-call meeting there. And Ms. Lansing, the board chairwoman, has said she intends to march with student demonstrators in Sacramento early next year to protest cuts in education spending.

But in some ways, the lieutenant governor’s support for the uprising, including students’ demands for higher taxes on the wealthy, may seem like a peculiar undertaking. He recently bought a $2.2 million home in Kentfield, and his business and investment holdings made him the richest of the state’s top elected officials in 2010, according to the most recent financial disclosures available from the California Fair Political Practices Commission.

Some observers, however, say his years in politics have allowed Mr. Newsom to cultivate an unusually approachable demeanor.

“He has a much broader role than the typical regent,” said George Marcus, a U.C. regent who is the founder and chairman of Marcus & Millichap, one of the largest commercial real estate brokerage firms in the country. “He is much more accustomed to dealing with different groups of people. Some regents are more inclined to interact with students than others.”

John Vigna, a spokesman for Mr. Pérez, said Mr. Newsom was casting himself as a liaison between the students and the regents, who are under intense scrutiny.

“I think that he does have a needle to thread here,” Mr. Vigna said. “The risk is you identify the problem and never figure out what the solution is.”
Posted by Dr. Patricia D. López at 4:53 PM