Just came across this devastating report on HISD that came out in February, 2015.  The standardized testing of kindergartners, if true, is over the top.

I understand that there is some movement toward authentic assessment in the district, but clearly much more is needed there and elsewhere throughout the state—including eliminating high-stakes testing—if the district is to take a turn in this regard.  While this involves work at the local level, it's important to be a voice the state level, as well.

Seliger's SB 149 is a start. Educate yourself on the bill and call your state senator or representative to let them know how you feel about this, and high-stakes testing, generally.

You can find lots of resources on testing at FairTest.org, TAMSA's Website and this blog, too.

Be mindful of that all of this standardized testing is a protracted agenda to shame and blame schools in order to corporatize, marketize, and privatize public education.  And to do so in this historical moment is inescapably about race, racism, and class privilege, too. 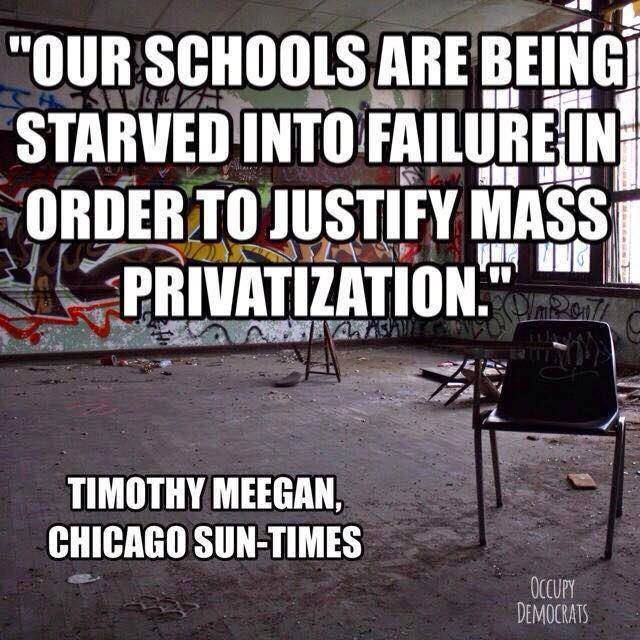 
After five a half years in office, Houston ISD Superintendent Terry Grier is still talking about what he will do as if he were new to town. In his State of the Schools speech last week, he promoted the same test-driven brand of school "improvement" that, by his own admission, has done little to improve student learning for the majority of HISD children. Sadly, he and the board majority who hired him show no signs of learning from their mistakes.

But we don't have to accept the status quo.
The HISD board has invested in test prep at the expense of a rich curriculum and precious instructional time, and instead of investing in teachers, librarians, and counselors. This year elementary school students will take 16 district-created practice ("benchmark") tests; older students take 30 practice tests. HISD has earned scorn as the district that gives practice standardized tests to kindergarteners.
HISD should obey state law (HB 5) and limit district benchmark tests to no more than two per subject per year. HISD should eliminate Texas' standardized test, the STAAR, as a promotion standard in grades not required by the state (3rd, 4th, 6th and 7th) so that teachers can focus on real learning. Standardized testing should be limited and used only for diagnostic purposes.

Classroom tests should be written by the students' teachers. Classes should center on inquiry, real-world application and meaningful assessment, not endless test prep and scripted instruction.
HISD should focus on teacher retention and effective teacher training. Nearby districts do. It should stop evaluating teachers using test scores, a practicedeemed unreliable by the American Statistical Association. And to reduce teacher flight to other districts, HISD should reinstitute extra pay for master's degrees.
Strong open-enrollment and comprehensive neighborhood schools can be the cornerstones of our communities. The Community Schools model, which combats the in-school effects of poverty with wrap-around social services, is a powerful alternative to school closures.
HISD should spend money wisely and responsibly, reducing class size and spending less on quick-fix test-prep programs and more on equitable funding of personnel and services.
But instead, HISD spent $60 million on Apollo 20, created by Harvard EdLabs' Roland Fryer. Billed as a turnaround plan for troubled schools, it was largely a test-prep program. The results were sharp declines in AP (Advanced Placement) scores, as shown by HISD's own figures; no sustained STAAR gains; and 25 percent enrollment declines in many Apollo schools. Even with such poor results, the HISD board subsequently approved another contract with EdLabs for a similar program,Leverage Leadership.
In a nod to growing parent opposition to over-testing, Grier admitted today's "testing society" generates unnecessary stress among students, but he failed to point out that HISD's school board has been the principal architect of that culture.While HISD can and must increase college admission and graduation rates, the obsession with standardized testing does not prepare students for college, career or active citizenship. The board's use of student test scores to pay, rank and fire teachers simply exacerbates the problem.
Inequitable school funding within HISD has reached a tipping point. Class size in many high-poverty high schools has skyrocketed to 40 students, and 39 percent of HISD's K-4 classes exceed the state class size limit of 22 students. Some 70 percent of our schools have no librarians.
The administration, backed by a board majority, has closed 15 schools since Grier arrived in 2009, nearly all in low-income, African-American communities. Closing schools damages communities, and re-opening schools as charters or magnets that exclude the community's children does not repair the damage caused by poverty and long-term neglect.
HISD teacher turnover has risen steadily from 11.1 percent in 2009 to 19.5 percent in 2013. In more than 22 schools, annual teacher turnover is 50 percent or higher. According to Texas Education Agency figures, since 2012, half of HISD principals are new.
HISD is hemorrhaging strong teachers, recruited eagerly by neighboring school districts offering more autonomy, higher compensation, and better teacher training. Increasingly, children return from summer vacation to schools full of strangers unfamiliar with their histories. This would not stand at private schools such as Kinkaid. The HISD board should recognize that teacher and principal turnover has become an obstacle to student learning.
If the district does not abandon this failed test-driven model and put the focus on real learning, the damage done will take generations to undo. Our children and city cannot afford that.
Bookmark Gray Matters. It's all about inquiry, real-world application and meaningful assessment.

Posted by Angela Valenzuela at 8:44 AM