Terrible news according to First Focus in an exceedingly important report to our state and nation.  Here are a few incisive comments:

In reviewing the Urban Institute’s data, Anna Bernasek of Newsweek notes that if this trend continues, “the federal government soon will be spending more on interest payments on the debt than on children.”

William Frey of the Urban Institute offers, "Rather than being feared, America’s new diversity – poised to reinvigorate the country at a time when other developed nations are facing advanced aging and population loss – can be celebrated.

He hits it on the nail.  Our nation's new diversity is not only feared, but there is also nothing to fear and everything to gain from reversing this trend and investing not just in our so-called "future," but also our "present."

Bruce Lesley
Child Abuse & Neglect Child Rights Childcare Children of Immigrants Early Childhood Education Federal Budget Health Housing & Homelessness Nutrition Poverty & Family Economics Safety Tax Policy The federal government makes more than 200 distinct investments in children. These include traditional children’s initiatives like education and child abuse and neglect prevention. They also include other investments that improve the lives of kids, like Medicaid and the Supplemental Nutrition Assistance Program (formerly Food Stamps).
Every year, First Focus publishes a Children’s Budget offering a detailed guide to federal spending on children and an invaluable resource for those seeking to improve the lives of America’s youth.
This year’s Children’s Budget 2015 brings more bad and unfortunate news for children. The share of federal spending dedicated to our nation’s children has now fallen to just 7.89 percent, which is down from a high of 8.50 percent in 2010. Consequently, the federal share of discretionary spending dedicated to children has dropped by 7.2 percent over the last five years. 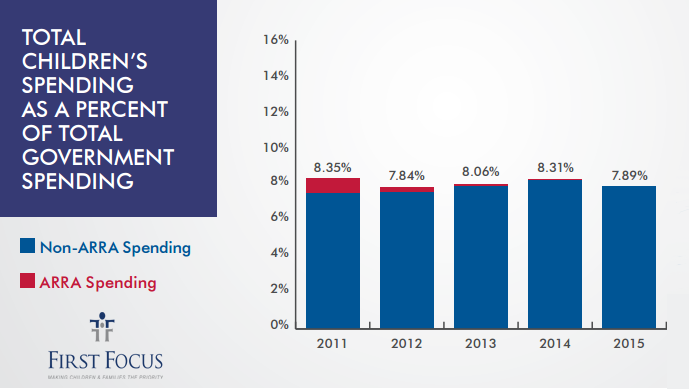 In addition, on an inflation-adjusted basis, federal discretionary spending on children has dropped by 11.6 percent between 2010 and 2015. Discretionary funded dedicated to children’s health, education, child welfare, training, safety, and nutrition are all down even without adjusting for inflation.
In reviewing the Urban Institute’s data, Anna Bernasek of Newsweek notes that if this trend continues, “the federal government soon will be spending more on interest payments on the debt than on children.” 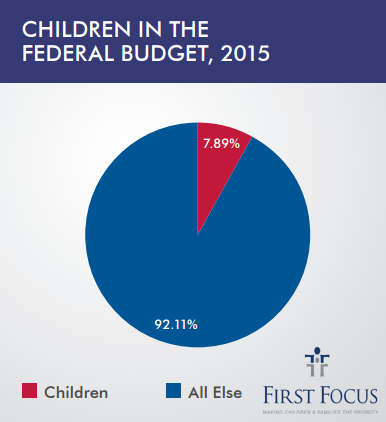 Few would think these facts reflect the values and priorities of the American people. That is reflected in the fact that, by a 69-25 percent margin, a Battleground Poll in May by the Tarrance Group and Lake Research finds that Americans do not believe the next generation will be better off economically than the current generation. As Chris Cillizza of the Washington Post notes, “The numbers from the Battleground Poll echo other data that has come out over the past few years that suggests a deep pessimism within the electorate about what sort of country they are leaving their children.” 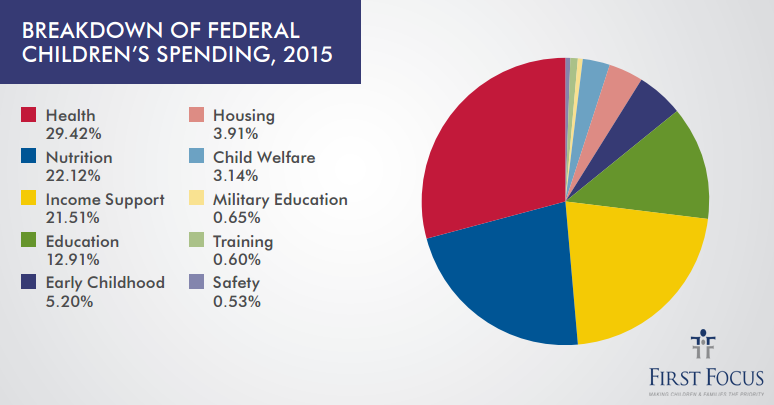 We are failing to make the investments in children they need to fulfill their promise. As the Kids’ Share report concludes:


Without adequately funded education, nutrition, housing, early education and care, and other basic supports, the foundation of children’s well-being is at risk. When children grow up without adequate supports, they are less able to support themselves and to contribute to economic growth as adults. . . . A continuous decline in federal support for children over the next decade bodes poorly for their future or the future of the nation.

These assertions paint a bleak picture for our children if we as advocates don’t do something. While we saw increased spending as a result of the American Recovery and Reinvestment Act of 2009, the 2011 Budget Control Act introduced sequestration that involved serious cuts to important domestic programs. The fiscal year 2016 discretionary spending levels, because of a lack of relief from sequestration, are the lowest in a decade. Federal investments in our children and our future are going in the wrong direction.

Simply, we are failing to invest in our children. And some of the problem is related to demographics and is intergenerational.  According to Steve Murdock, former U.S. Census Bureau Director in the Bush administration, and his co-authors Michael Cline and Mary Zey, in our publication Big Ideas: The Children of the Southwest:


What is also evident is that the children of today will not be successful without substantial assistance from an older population that now and in the future is likely to possess superior economic resources. . . .
The major question raised . . . is: Will the United States’ adult population (through elections, taxes and other factors) support the youth who are racially and culturally different from themselves and their children or will they perpetuate a dual class education and economic structure which has dominated many areas in the United States, including many areas in the Southwest?

How that question is answered will be critical to our nation’s future. William Frey, author of Diversity Explosion: How New Racial Demographics Are Remaking America writes:


. . . a growing diverse, globally connected minority population will be absolutely necessary to infuse the aging American labor force with vitality and to sustain populations in many parts of the country that are facing population declines. Rather than being feared, America’s new diversity – poised to reinvigorate the country at a time when other developed nations are facing advanced aging and population loss – can be celebrated.

In 12 U.S. states (Hawaii, New Mexico, California, Texas, Nevada, Arizona, Florida, Maryland, Georgia, New Jersey, Mississippi, and New York), the U.S. Census Bureau estimates that minority children under the age of 10 are in the majority. And, enrollment in our nation’s public schools has also become majority minority, according to the National Center for Education Statistics.
“Yet, as Frey explains, “this youth-driven diversity surge is also creating a ‘cultural generation gap’ between the diverse youth population and the growing, older, still predominately white population.”
Frey points to states where the difference between the percentage of seniors and children who are white as places where there may be greater tension between the generations and competition for resources allocated to children and the elderly, and where children may be significant losers.
Murdock, Cline, and Zey share this concern and point to research by James Poterba that found “in communities with large proportions of elderly residents there were significantly lower per-capita educational spending, especially when the children were of a different race from that of their elders.”
According to Frey, among the states, Arizona leads the way with a “cultural generation gap” of 41 percent (83 percent of seniors and 42 percent of children were white). So, how is Arizona doing by its children?
The Arizona Daily Sun has documented how budget cuts to child protective services in Arizona caused child welfare caseloads to soar and reports of child abuse to be ignored, how cuts to public education resulted in per-public spending during the recession to decline by 24 percent, and how reductions in state funding to higher education were $300 million below pre-recession levels.
In addition, Arizona is the only state in the country to no longer provide health insurance coverage to children under the Children’s Health Insurance Program when it let the program expire at the close of 2013. It now has the second highest uninsured rate for children in the country.
Arizona is a state that enacted some of the some most stringent anti-immigration legislation in the country, SB170, and banned schools from offering courses such as Mexican-American studies, which federal courts have partially overturned.
As Murdock, Cline, and Zey said:

The future of areas such as the Southwest, and of the Nation as a whole, may be markedly affected by the extent to which its older populations are willing to step forward to support its increasingly diverse youth.
What is clearly evident is that the future of the Southwest and the United States as a whole is increasingly tied to the future of its minority populations. . . . Whether the nation prospers or struggles to maintain its current standard of living and whether it can compete internationally will depend on how well the diverse children such as those in the Southwest do. Ultimately, how well these children do will be how well America will do.
To ensure a strong future America, we must overcome the forces and ignorance and prejudice that are cutting – rather than investing – in education and our nation’s children. New York Times columnist Eduardo Porter adds:

If the next generation is going to be handed the bill for our budget deficits, we might as well make the investments needed to help it bear the burden. So far, we seem on track to bequeath our children a double whammy: a mountain of debt and substantial program cuts that will undermine their ability to shoulder it when their time comes.
Ronald Brownstein has also written extensively about this generational political challenge. According to Brownstein:

The nation faces the risk of sustained political tension between its racially diverse, Democratic-leaning youth population and its predominantly white, Republican-trending senior population — what I’ve called the Brown and the Gray. Although it’s rarely discussed now, both groups share an interest in equipping the young to obtain middle-class jobs that will generate the tax base to support a decent safety net for the old.
Since kids do not vote, we need an informed electorate that will translate its long-standing support for children into votes. This requires that advocates for children, including parents, grandparents, educators, etc., work together to build a grassroots movement to educate the public and demand from policymakers that they put forth a real policy agenda – and not just lip service – that would improve child well-being and then hold those policymakers accountable for real results.
Imagine how different things for children might be if politicians were the ones to lose their jobs for failing to improve education, reduce child poverty, etc. What is needed is a focus on the needs of children before it is too late.
Former Republican House Majority Leader Eric Cantor apparently agrees that the new 114th Congress should make children a focus of its agenda. He writes:

As the new Congress convenes, I hope the president and members from both parties will keep one number in mind: 8,053,000. That is an estimate of the number of new Americans expected to be born between now and the end of this Congress and President Obama’s second term two years from now. . . . The future of those 8,053,000 little boys and girls deserve to have the two years of this Congress focused on them and not the next election.
According to the U.S. Census Bureau, “…50.4 percent of our nation’s population younger than age 1 were minorities as of July 1, 2011.”  We need to value each and every one of those children.
I remember understanding this for the first time so clearly when New York Governor Mario Cuomo said in a speech before the Democratic National Convention in 1992 about the plight facing children a generation ago:

They are not my children, perhaps. Perhaps they are not your children, either. But, they are our children. We should love them.
But even if could choose not to love them, we would still need them to be sound and productive. Because they are the nation’s future.
Now is the time for us to work together to educate policymakers at the federal and local level about the harmful path we are on. We must raise our voices in support of those who will put our children and our families first. It is imperative that we, as a country, move down a path that puts children at the forefront of policy decisions.
Download you copy of Children’s Budget 2015.
Download @First_Focus Children’s Budget 2015 on 200+ fed investments in kids: http://bit.ly/1N3ESQK #InvestInKids
Posted by Angela Valenzuela at 2:05 PM