My Reflection this Evening on the WWI Battlefield Sacrifice of José de la Luz Sáenz, a Critically Conscious Educator


Enjoying the evening, the French countryside, far, far away from Texas near a village named Montaville whose peaceful, scenic views belie its history of unspeakable horror during the First World War.

As per the World War I Diary authored by Jose de la Luz Saenz (and translated by Emilio Zamora [see previous post]), the town was obliterated by the Germans with 12 large projectiles.

Shortly thereafter on Monday, September 2, 1918, "Luz"—as he referred to himself—and the other U.S. soldiers that accompanied him from the 90th Division discovered 50 German supply horses—yes, 50.  With the aim of thwarting their usefulness to the nearby German army, French forces mercilessly bombed them, decimating them all.  At least up until that point in his war diary, Luz described this as one of the "ugliest, most difficult scenes" that unfolded before their very eyes.

After this, a 150-millimeter cannon began to bomb Luz and his fellow soldiers with him writing his concluding thought that day,

It was a horrible day for the soldiers. The shells were flying over our heads, howling like souls from hell. (p. 195)

Without a doubt, Luz was an extraordinary person.  He voluntarily joined the military in order to be able to return home and make the case for civil rights for Mexican Americans, having paid with others the ultimate price of wartime sacrifice on behalf of the homeland.

Particularly between September and November, 1918, they endured the fiercest fighting in this territory of northeastern France where thousands of American—and of course French, British, Scottish, Irish, and Welsh—soldiers lost their lives.
The relative few like Luz that survived, endured the cold, rain, gas warfare, bombs, sniper fire, sleepless nights, and hunger as a result of their continuous strategic movements against the unrelenting German army that sought to reach Paris.
Yet Luz managed to write on napkins, paper, and and whatever he could get his hands on in order to produce an intimate record of the war that not even the French of this very area are likely to have.  Or if any survived, it would still be a different one from another perspective.
Luz was a former school teacher with a critical consciousness and social justice ethic. He sought to leave a record that Emilio Zamora has miraculously recovered.
Even as we trace Luz' steps through this theater of war, we discuss and ponder its larger significance in our lives and in our history as Mexican Americans in the U.S., as the progeny of a subject people whose ascendancy—however uneven, incomplete, and ever evolving—was purchased with the sacrificial hardship and blood that was shed on the battlefield in places like Montaville and beyond. 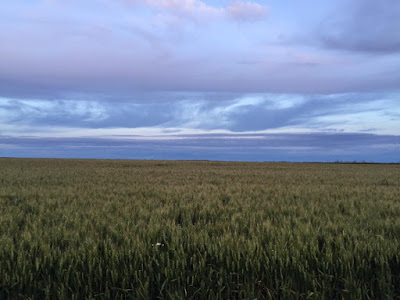 Posted by Angela Valenzuela at 5:13 PM