“We are in a Full-Fledged Constitutional Crisis"

I am very much aware of my international audience that consists of individuals from countries from throughout the world.  This, for example, includes these countries (aside from the U.S.) who are regularly tuning into my blog posts: Russia, Germany, Slovakia, Mexico, Netherlands, United Kingdom, China, Ireland, and Vietnam.  Other countries tune in on other weeks with other posts with regular visitors from Canada, Australia, Finland, France,  India, and the Ukraine (I'm sure I'm missing a few other countries...apologies).  Thank you so much for your interest in my blog.
That said, I take great responsibility with my thoughts and words in this Fake News World of ours.  I also do my best never to sound alarmist even if I express deep concern, especially over policies, politics, and the general direction our country is headed.
I'm not just a blogger, but also a college professor at The University of Texas at Austin and I take my role as a public intellectual seriously and try to model this for my students who are developing their own voices.
In any case, I think that a better title for this New York Times opinion-editorial by David Leonhardt is “We are in a full-fledged constitutional crisis," with the firing of FBI Director James Comey. Leonhardt develops his argument by pointing correctly to Trump's penchant for lying.  Just as importantly, as Leonhardt also notes, is his huge motive to get rid of Comey to compromise the investigation of Trump's ties to the Russian government.
Lest you think we Americans are dim-witted, trust me that none of this is lost on those of us that remain attentive to the news and/or who are otherwise involved in policy and politics.  And because of the freedoms that we enjoy in this country, our numbers are great and always growing.
Yes, this is a high-stakes moment for our nation as we are in definite trouble without an independent prosecutor.  I am very happy to see Senator John McCain insisting on this right now.
Many of us are preparing at the moment for the 2018 midterm elections in order to get this party out of power.  In the meantime, it is incumbent on the Republican party to reign in Trump who has, conveniently to himself, compromised the investigation of his dealings with Russia.
Not only do we need for this investigation to be done with integrity and independent oversight, but as a part of this, we need to see Trump's income taxes, once and for all.  If there's smoke, there's fire.
Angela Valenzuela
c/s 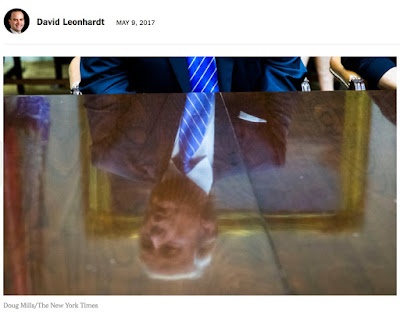 The president of the United States is lying again.


He is lying about the reason he fired James Comey, the F.B.I. director. Trump claimed that he was doing so because Comey bungled the investigation into Hillary Clinton’s email, which meant that Comey was “not able to effectively lead the bureau.”


There is no reason to believe Trump’s version of the facts and many reasons to believe he is lying. How can I be so confident?


First, it’s important to remember just how often Trump lies. Virtually whenever he finds it more convenient to tell a falsehood than to tell a truth, he chooses the falsehood.


An incomplete list of the things he has lied about include: Barack Obama’s birthplace, Obama’s phone “tapp,” John F. Kennedy’s assassination, Sept. 11, the Iraq war, ISIS, NATO, military veterans, Mexican immigrants, Muslim immigrants, anti-Semitic attacks, the unemployment rate, the murder rate, the Electoral College, voter fraud, the size of his inaugural crowd, his health care bill and his own groping of women.


Second, Trump previously praised Comey for reopening the Clinton email investigation, which was the core of Trump’s rationale for the firing, as Igor Volsky noted.


Third, Trump claimed that he was merely following up on a Justice Department recommendation and released a letter from the department to bolster his case. Yet the timing doesn’t make sense — and Trump aides have already undercut their boss, by acknowledging that he wanted to fire Comey.


As Bill Kristol pointed out, the Justice Department letter was dated the same day as the firing, and the official who wrote it has been on the job for just two weeks — not enough time for a serious review that could have reversed Trump’s previous position.


“So there was no real recommendation from DOJ,” Kristol wrote. “Trump wanted to do it, and they created a paper trail.” Kristol, a conservative, added, “One can be at once a critic of Comey and alarmed by what Trump has done and how he has done it.”


Even more damning, White House sources also admitted on Tuesday night that Trump himself initiated the firing. The White House charged Jeff Sessions, the attorney general, with coming up with a reason to fire Comey, as The Times and others have reported.


Finally, and most obviously, Trump had a very big motive to fire Comey and install a loyalist. Comey was overseeing the investigation into the Trump campaign’s numerous strange ties with the Russian government.


“The firing of James Comey as F.B.I. director is a stunning event,” Benjamin Wittes and Susan Hennessey, two of the sharpest observers of the Russia case, wrote for Lawfare. “It is a profoundly dangerous thing — a move that puts the Trump-Russia investigation in immediate jeopardy and removes from the investigative hierarchy the one senior official whom President Trump did not appoint and one who is known to stand up to power.”


The president is lying about firing a top law enforcement official, and he is almost certainly lying to protect himself and his aides from a full investigation into their own activities.


Brian Schatz, a Democratic senator from Hawaii, wrote on Tuesday night, “We are in a full-fledged constitutional crisis.”


It’s now clear that Trump’s Justice Department has no independence. Both Sessions, and Sessions’s deputy, Rod Rosenstein, are acting like Trump enforcers. And now the F.B.I. is compromised as well.


The only way to unwind the constitutional crisis is an independent inquiry, completely free of Trump’s oversight. Several Republican members of Congress expressed concern about Comey’s firing, but words aren’t enough.


Members of Congress need to give Americans reason to believe the Russia investigation isn’t a charade with a predetermined outcome. They need to make clear that while the president may think he is above the truth, he is not above the law.

Posted by Angela Valenzuela at 8:31 AM