Exciting Results on Bilingual and Dual Language Education in AISD!!!

It gives me exceeding pleasure to share with you this report that you can download HERE on the 2016-17 results of the bilingual education and English as a second language programs implemented in the Austin Independent School District (AISD).  It has been an uphill battle for a program that like all bilingual and dual language education programs everywhere face, simply take time to develop and mature.

In our fast-paced world of short-term, project funding cycles that masquerade as "reform" in pursuit not only of evidence-based results but "speedily-acquired" ones, as well, this predictable narrative demonstrates that barring a poor program design or low investment, "speeding up" bilingual education results is an untenable proposition.  Our children aren't widgets.  They are human beings negotiating language, culture, and identity in a complex and troubled world that frequently feels more against, than for, them.

This of course requires enormous commitment, time, and resources, if done well.  I truly admire all of our bilingual and dual language education teachers, AISD staff, Austin Area Association for Bilingual Teachers, and our committed leadership including Dr. David Kauffman, Exec. Dir. of English Language Learners, Superintendent Paul Cruz and board member Dr. Ted Gordon for staying the course despite naysayers that sadly, include members of our current school board.

Friends, I understand that five school board member seats are up for re-election.  Let's insist on electing school board members that proudly support bilingual and dual language education, Ethnic Studies, and who support our East Side Schools that they are currently threatening to "consolidate," a euphemism for closure.

We of course know that these results, while positive, could still be stronger, so that's why we need strong leadership.  Rather than divest our children, teachers, and community of this opportunity, we need to invest in them instead.


Bilingual and English as a Second Language Programs Summary,
2016-2017 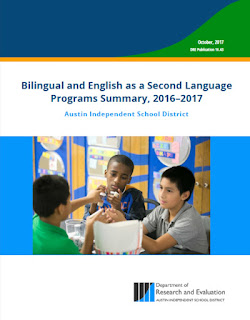 Executive Summary
The purpose of this report is to provide information on the bilingual education (BE) and English as a second language (ESL) programs implemented in the Austin Independent School District (AISD) during the 2016–2017 school year. This document summarizes the programs implemented, the numbers of students served, and students’ language acquisition and academic performance.

Seventy-two percent of ELLs were enrolled at the elementary school level, and 71% of these students were served in the bilingual dual language (DL) Program. AISD also provided two-way DL program support to ELLs and English native speakers (non-ELLs) at elementary schools. The DL Program was offered at eight middle schools. In addition, AISD offered the Transitional/Late-Exit program at the elementary level and the ESL Program to ELLs at all grade levels.

ELLs were assessed in English language proficiency on the state-required Texas English Language Proficiency Assessment System (TELPAS). From 3rd grade on, most ELLs at each grade level received composite ratings of advanced or advanced high, which is consistent with ELLs across Texas acquiring more English as they continue in school. Fifth-grade ELLs made the greater annual progress on TELPAS (64%) than did ELLs at other grade levels. Greater percentages of ELLs at high-income campuses than at low-income campuses had advanced or advanced high TELPAS composite ratings. At other elementary schools, lower percentages of Spanish-speaking ELLs than of students speaking other languages attained advanced or advanced high TELPAS composite ratings. However, this trend was reversed at the middle and high school levels.


In addition, ELLs were assessed in academic subject areas on state-required assess-ments, such as the State of Texas Assessments of Academic Readiness (STAAR) and end-of-course (EOC) exams. When compared with ELLs across the state, AISD ELLs had higher passing rates on many STAAR assessments. For example, AISD ELLs outper-formed Texas ELLs in reading in 3rd, 4th, and 5th grades; in math at 3rd and 5th grades; in writing at 4th grade; and in science at 5th grade.


Focusing on a group of ELLs and non-ELLs who were enrolled in AISD for 5 consecutive years and who were matched by socio-economic status, for STAAR math, ELLs had slightly higher passing rates than non-ELLs from grade 4 to grade 7. For reading, non-ELLs’ passing rates were slightly higher than those of ELLs in grades 3 and 4. This gap was smaller by grade 5 and 6 and was no longer observed in grade 7, indicating that ELLs in this study closed that gap by grade 7.

AISD ELLs met the EOC standards at a higher rate than did ELLs across the state in English I, Algebra I, Biology, and U.S. History, while remaining about the same as Texas ELLs on English II. AISD ELLs’ passing rates on the EOC assessments improved slightly from 2016 to 2017 in Algebra I and U.S. History, remained about the same in English I,and decreased slightly in English II and Biology. AISD ELLs who had exited ELL status and were being moni-tored had high STAAR and EOC passing rates in all subject areas, showing their continued academic success after having been served by these programs in earlier years. Lastly, depending on the subject and the grade level, between 13% and 18% of elementary ELLs, 4% and 10% of middle school ELLs, and 2% and 12% of high school ELLs not only passed the STAAR/EOC tests but also reached the highest benchmark (mastered grade level).

Across the district, there were 15 Bilingual/ESL professional development courses, totaling 117 sessions in 2016–2017, and 3,334 AISD staff members benefited from attending these sessions.

Elementary schools offering DL implemented one of three campus-chosen DL model options to better suit the needs of their students, while maintaining the key elements of DL instruction (https://www.austinisd.org/multilingual/dual-language#title). Continuous staff development sessions and campus-based support from bilingual specialists were offered to these schools.

In addition, the specialists piloted the use of a classroom observation guide on a sample of DL classrooms to show whether certain DL classroom elements were present. These preliminary results showed that key DL classroom elements were observed in many classrooms. The results were used by district staff to revise and improve the observation guide, which will be used again in 2017‒2018 with another sample of classrooms. In the Fall of 2017, the observation guide will be shared with campus principals and teachers so they can examine whether key DL elements are present in their campus classrooms. For information about the DL program see the Multilingual Education Team website, https://www.austinisd.org/multilingual.
Posted by Angela Valenzuela at 11:27 PM