SAVE THE DATE: January 20, 2018: Women to march against Trump, his policies in Austin, elsewhere 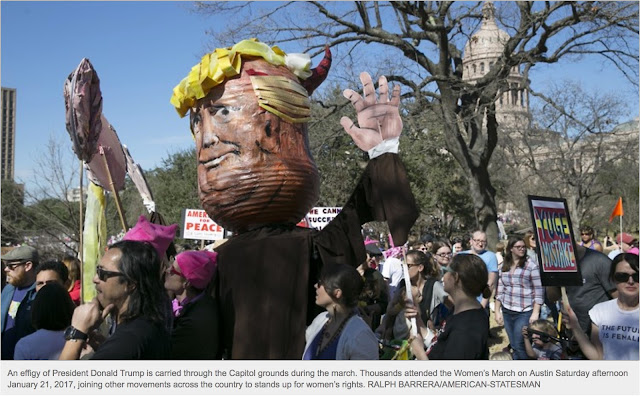 The one-year anniversary of Donald Trump’s inauguration as president will see women’s protest marches and rallies in Austin and 10 other Texas cities on Jan 20.
Activists, including Texas Handmaids and the Resistance Choir of South Central Texas, have planned a rally at City Hall in Austin to call for Trump’s impeachment followed by a march to the state Capitol for a rally defending abortion and other reproductive rights, according to the organizers’ Facebook page. A rally at San Antonio’s Main Plaza hosted by the TX 23rd District Indivisibles will include a push for voter registration.
In addition to those two cities, events are planned in Amarillo, Brownsville, Dallas, Denton, El Paso, Fort Worth, Houston, Nacogdoches and Waco.
Although the Texas Democratic Party posted links to Facebook pages for the various marches and rallies, a spokeswoman for the party said it is promoting the events but is not a sponsor or organizer of them.

Posted by Angela Valenzuela at 3:12 PM