This is very exciting!  Canada requiring Indigenous history and culture as a mandatory part of Ontario's curriculum shows how this movement is taking root in other places beyond the U.S.

Structurally, as one can see from this report, they have a "Minister of Indigenous Relations and Reconciliation."  Wouldn't it be great if all of our countries had cabinet-level positions like these?  This is obviously not possible under the current administration, but perhaps in future administrations.

Like Canada, we also all need Truth and Reconciliation Commissions so that we as a polity can reconcile ourselves with our racist, genocidal past.  I would love to see such things in other places like Mexico and throughout Central and South America, too.

Thanks to UT  Education Policy and Planning masters student, Karissa Jobman, for sharing this excellent news!

Revisions to courses like Social Studies and History have begun, to be complete by fall 2018 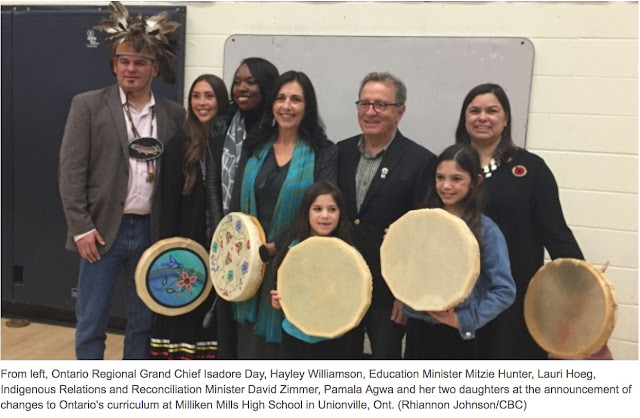 Ontario will incorporate the contributions, histories, culture and perspectives of Indigenous peoples into a revised curriculum for all students in the province, the education minister announced Wednesday.
Mitzie Hunter made the announcement at Milliken Mills High School in Unionville with David Zimmer, Ontario's Minister of Indigenous Relations and Reconciliation.
"As part of Ontario's response to the Truth and Reconciliation Commission's report, our commitment was to bring learning about First Nation, Mé​tis and Inuit people [into] Ontario's education curriculum," said Hunter.
The announcement was made in conjunction with Ontario's Treaties Recognition Week.
"This is about recognizing the role of treaties; this is about bringing education into the classroom for both Indigenous and non-Indigenous students," said Hunter.

Students will learn about the histories, culture, and contributions that Indigenous people have made to Canada. The curriculum revisions already started this fall and will be fully implemented by fall of 2018. Courses in both elementary and secondary schools such as Social Studies, History and Geography will be revised.
The revisions were made in co-ordination with residential school survivors, First Nations, Métis and Inuit partners.
"The announcement today around curriculum and the education system in Ontario now formally recognizing treaty recognition is a huge step forward," said Ontario Regional Chief Isadore Day.
"With reconciliation, you need truth. Part of the education effort is to actually get to the bottom of the real history of the relationship between the Crown and Indigenous people." 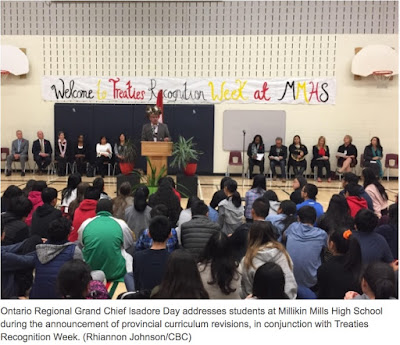 Response to Calls to Action

Bringing knowledge about treaties, Indigenous rights, cultures and perspectives to the classroom as a mandatory part of the province's curriculum is a response to the Truth and Reconciliation Commissions Calls to Action 62 and 63.
The province is investing $2.7 million support capacity building for educators to teach the new curriculum.
The gym at Milliken Mills High School was filled with about 1,000 students and faculty for the announcement.

Neha Naqvi, a Grade 12 student, said Indigenous issues should be talked about at school.
"We shouldn't ignore these issues just because they happened in the past. It still affects people today and we should talk about them not only with the government but First Nation people themselves and help each other."
This is the second annual Treaties Recognition Week in Ontario, running Nov. 5-11.

Posted by Angela Valenzuela at 6:12 PM