Excellent political theory and analysis of why conservative Latinos support Trump by Dr. Alfonso Gonzales Toribio, professor of Ethnic Studies and director of the Latin American Studies Program at UC Riverside. To this, I would add their own lack of understanding of history that Trump exploits as follows:

"The point of the MAGA slogan is to bury history with its deep class and racial disparities and to conceal the crises of our time: savage inequality, climate change, pandemics and racial conflict."

His approach is seductive to those that have internalized racism—meaning that they have adopted the dominant, pejorative image of their group—and that, as a consequence, need someone to blame. 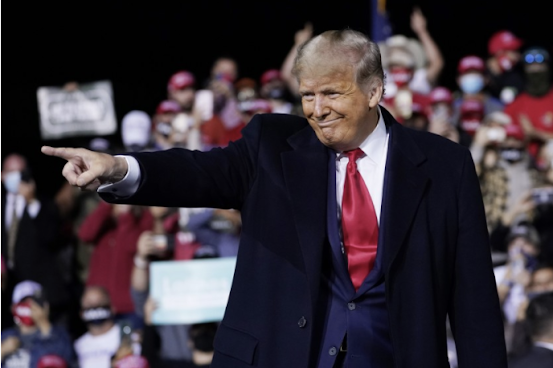 How is it that working-class whites and a significant number of Latinos could support Donald Trump, a self-aggrandizing billionaire with nothing in common with them and little understanding of their lives?

The Italian political theorist and leader Antonio Gramsci asked a similar question about the appeal of fascism among the working class. Why was it that fascism, a project that favored the capitalist class, could have so much support among working-class people, who by the conventional wisdom of the time were expected to side with the left? This was the fundamental question that Gramsci contemplated in his famed prison notebooks, written from his cell after his arrest by the Italian fascist government in 1926.

To describe this dynamic, Gramsci put forward the idea of the “historic bloc,” among other concepts, to explain the unification of a constellation of groups with opposing interests into an apparently seamless front. Such a bloc, he argued, blurs the lines between the state and society and functions to repress dissent in moments of crisis and intense labor and social-movement militancy, like the one we are living in now.

These blocs congeal by demonizing their enemies foreign and domestic, declare states of emergency and criminalize legitimate social protest in the name of national unity. They can unleash a viciousness among the state security forces and among armed citizens. Such blocs don’t have to be based on truth, facts or coherent arguments.

Never rational, such authoritarian movements are based on pure emotion and a sort of identity politics of the right, using common-sense ideas about how the world works among the working class to draw them from the left. The bloc depends on an intense identification with a strong-man leader, the romanticizing of violence for resolving conflicts and a selective reading of history and national culture that appeals to groups that find protection by joining the bloc even if in a subordinate position.

Although the base of the Trumpian bloc is overwhelmingly white and male, 26% of Latinos support Trump over Biden. Many conservative Latinos identify with macho political posturing, pro-2nd Amendment rhetoric, simple law-and-order solutions to complex problems, demonization of the left and disdain for the Black Lives Matter movement.

This bloc, under the “Make America Great Again” banner, requires its supporters — particularly subordinate groups — to accept a degree of cognitive dissonance in submitting to the emotional appeal to a mythical moment of American greatness. For many of the white working class, that moment is before the rise of the civil rights movement, Latino immigration and multiculturalism, the idea that diverse people should have representation and rights in pluralist society.

For right-wing Latinos, this means ignoring both the historical and the contemporary injustices inflicted on their community, such as the lynching of Mexicans by the Texas Rangers in the 1920s, the deportation of at least 1 million Mexicans in the 1950s, the separation of children from their parents at the border or the alleged coerced hysterectomies of Latina migrant women in immigration detention centers now.

The point of the MAGA slogan is to bury history with its deep class and racial disparities and to conceal the crises of our time: savage inequality, climate change, pandemics and racial conflict.

Racism and xenophobia have historically provided the ideological glue that has kept the white working class supporting the most rabid sectors of the capitalist class and from seeing their fate linked with racial others and immigrants. Even during the current economic disaster, it is easier for many working-class whites to identify with the Trumpian bloc, led by a billionaire rooted in the transnational capital class, than to have a sense of solidarity with Latinos or Black people.

Historic blocs of the right emerge precisely at that moment when the left is strong and when the right decides to stop playing by the rules of liberal democracy, the system for resolving conflicts through representative government and respect for individual rights.

These are dangerous times that compel us to recall the fascist bloc that emerged in Italy as a reaction to the Biennio Rosso, the great workers movement of 1919 and 1920, when workers took over factories and continued production in defiance of the owners.

It emerged in Germany on the heels of the Weimar Republic, a liberal government, in the context of intense labor struggles and one of the strongest communist parties in Western Europe at the time. And in the 1930s, authoritarian blocs in El Salvador, Nicaragua, Guatemala and the Dominican Republic led to dictatorships and brutal repression that lasted for much of the 20th century.

In the name of redeeming a victimized nation, fascist leaders like Mussolini and Hitler created historic blocs that destroyed liberal democratic institutions, outlawed dissent and even murdered their opposition, and channeled the anger of the working class into an ultra-nationalist project at the service of capital. Fascism eventually led to the collapse of democracies in Italy, Germany, Spain and Portugal and the death of 85 million people by the end of World War II.

These are unprecedented times, with a pandemic raging, millions unemployed, rising hunger and poverty, racial tensions and clashes between police and protesters. The stability of the imperfect American democratic experiment is being threatened by a historic bloc that empowers the president to undermine democratic institutions and promote the use of violence against protesters and dissenters in the name of law and order.

Trump maybe created new symbols, like his red MAGA hat, and slogans to try to differentiate himself from the fascisms of the 20th century. But Robert O. Paxton, a leading historian of fascism, has noted in his classic book “The Anatomy of Fascism” that “a fascism of the future — perhaps an emergency response to some still unimagined crisis — need not resemble classical fascism perfectly in its outward signs and symbols” to be any less dangerous.

Alfonso Gonzales Toribio is a political theorist and associate professor of ethnic studies and director of the Latin American Studies Program at UC Riverside. He is the author of “Reform Without Justice: Latino Migrant Politics and the Homeland Security State.”

Posted by Angela Valenzuela at 2:11 PM