I just learned about and signed this petition and encourage all faculty, scholars, and students of good conscience to do so, as well. Just know that to be opposed to Critical Race Theory (CRT)—as Donald Trump is currently doing—is to oppose not only all of us whose names appear below, but the intellectual pursuit of knowledge that is not only so critical to our mission in higher education, but also liberatory. After all, we as scholars expose the truth of white supremacy and capitalist patriarchy that is just as liberatory for whites as non-whites because it illuminates power and how it works to oppress and maintain our highly unequal status quo.

I want to remind folks that we won a major court case on CRT curriculum already, Arce v. Douglas (2017), in Arizona which itself was a long and winding story with updates that I have posted to this blog over the years.

I, along with Dr. Stephen Pitti (Yale University) and Dr. Nolan Cabrera (University of Arizona Tucson) were the three expert witnesses on behalf of the Mexican American Studies student and teacher plaintiffs in this case. I have numerous posts to this blog on the court case, but these two are key:

The whole country in effect became Arizona after Trump was elected.  Don't believe Trump's lies. He himself illustrates why we need CRT and other critical frameworks lest we're all to become dull-witted pawns of empire. As you can see from this impressive list, we're so not that. Nor are we unpatriotic.  The opposite is true. We critique out of a love for our country's highest ideals. We are the embodiment of the democratic ethos.
Glad to see Arizona trending liberal these days. I trust that the pendulum is swinging in the other direction right now. My last comment is that you should read what we write. As Franklin D. Roosevelt himself once said, "There's nothing to fear but fear itself." More positively, there is everything to gain from knowing this body of impressive scholarship.
-Angela Valenzuela
#EndWhiteSupremacy 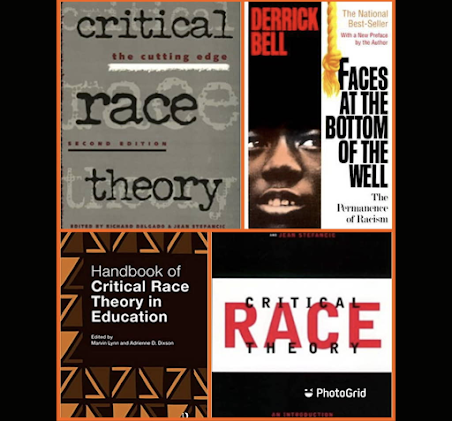 On September 4, 2020, Russell Vought, Director of the Office of Management and Budget for the Executive Office of the President issued M-20-34, a “memorandum for the heads of executive offices and agencies.” The document states that “Executive Branch agencies have spent millions of taxpayer dollars, to date, on “training” government workers to believe divisive, anti-American propaganda.” As critical race scholars working in universities and communities across the globe, the following statement is our response to Mr. Vought’s memorandum.

Critical Race Theory (CRT) is committed to the historical documentation and naming of atrocities carried out in this country in the name of “freedom” and “liberty.” In spite of this historical context, the claim that the United States is founded on freedom from tyranny, freedom of expression and speech, and the right to exist as a whole person, are ideals that all citizens of the US are taught in school to value, cherish and honor. From our purview as scholars of race and education, the United States of America has struggled to uphold not only the Constitution but also the Preamble of the Constitution. We are clear that racial healing cannot occur absent the recognition of the historical and current struggle against all forms of structural oppression that encumber the U.S. from ever fully living up to its democratic ideals.

Conflating Critical Race Theory (CRT) with workshops on white privilege is an example of the profound ignorance the current administration has as it pertains to studying and understanding race in the United States. Furthermore, labeling CRT, an area of scholarly study, and diversity training that examines the role of white privilege as divisive and anti-American is an affront to the First Amendment of the Constitution of the United States. The current attempts to silence and suppress CRT also violate principles of academic freedom upheld by the American Association of University Professors.

We are deeply concerned about the lack of understanding, ignorance, and silencing of Black, Indigenous, and other scholars of color, who have been instruments in the fight against racism, sexism, classism, and all xenophobic ways of thinking. We are outraged over a federal call to end efforts to name racism and address systemic racial inequities. We are disappointed to see leaders weaponize their position and power to further fuel racial discord during a time of significant racial unrest. We are disturbed that the Office of the President would denounce a well-vetted, rigorous, and theoretically sound framework that thousands of scholars have utilized for the last 40 years to understand how race shapes every imaginable societal system.

CRT is necessary and powerful in the fight against systemic racism and essential to antiracist educational and professional development and training. We call on our institutions, fellow academicians, institutional leaders, community partners, policymakers, and all who have benefitted from CRT or learned as a result of their participation in anti-racism workshops to stand with us in acknowledging that systemic racism exists and is violence against ALL humanity. If this country is to “insure domestic tranquility,” it must work to protect ALL people, and make ALL people safe. We refute any communication that denies social and political realities and prohibits forward movement toward a racially just society. We challenge academic work by those who are fearful of open and critical discourse. We honor the reality that multiple histories and experiences exist for the diversity of peoples in the United States, for every race, ethnicity, gender identity, religion brings with it its own histories included in and not erased by a whitewashed “American” experience. Most importantly, we fight against willful ignorance, hatred, and violence due to racism. The revolutionary roots of CRT drive us to contest such injustices. We have a lot of work to do. But we remain committed to engaging together in the worthwhile struggle to move this nation toward Dr. Martin Luther’s King Jr.’s vision of a beloved community.