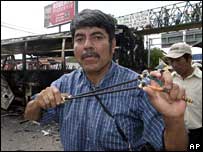 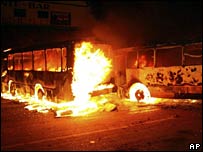 
Striking teachers seized 12 private radio stations in the southern Mexican city of Oaxaca and set buses on fire, as a long-running protest worsened.
They acted after unidentified gunmen opened fire on a government radio station already under their control.

The strikers used the stations to tell parents to ignore Monday's start of the school year and keep children at home.

Teachers have been striking since May to demand higher wages and Oaxaca Governor Ulises Ruiz's resignation.

The shooting began at a government-owned radio station already in the hands of the striking teachers.


A number of rounds were fired by unknown gunmen, and the teachers say one of their members was injured.
The attack prompted a violent retaliation by the teachers, and a number of buses were overturned and set on fire.

Dozens of the protesters also took over the privately-run radio stations and started broadcasting messages of defiance.

Others armed with crude weapons blocked off some of the main roads into Oaxaca.

A spokesman for President Vicente Fox blamed the state government for attempting to take back the radio station by force.

He said the attack was carried out without consulting the federal authorities and described it as a unilateral decision by the governor of Oaxaca, Ulises Ruiz.

Governor Ruiz has become a key target for the teachers.

Although their dispute started out in May as a campaign for more pay, it has since transformed into an attempt to get the governor to resign from office.

The teachers say he is guilty of rigging the state election two years ago and of using heavy-handed tactics to deal with the strikers.

The governor, who belongs to the former ruling party, the PRI, has refused to step down.

Last week a number of people were taken hostage by activists after gunmen opened fired on a teachers' march.

They were later released.

The protests have also taken on a much wider context and have become woven into the continuing row over who won Mexico's presidential election.

Four months into this round of tension and parts of Oaxaca are starting to look ungovernable, and that could be a real challenge for the country's new leader.