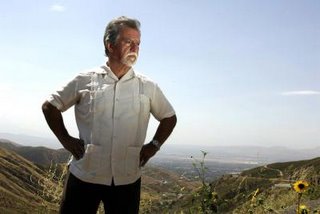 This is a pretty good news story about a concept that is frequently understood--Aztlan, the mythical homeland of the Aztecs (located in North America by most accounts). I think that it helps to dispel concerns that lots of folks have about a reconquista. I think that the term, "re-Mexicanization" that Navarro uses is yes, provocative, but also interesting because of the actual "re-coloring" of the U.S.

Along this theme, I urge folks to read Juan Hernandez' recent book titled, The New American Pioneers: Why Are We Afraid of Mexican Immigrants? It's a very positive read for a general audience regarding the current immigration situation. Scroll down to "Books that I'm reading" on the right hand side of the blog to find out how to purchase it. -Angela


Myth of Aztlan lures Hispanic people home
Though its definition is murky, term from Aztec folklore has asserted itself in the language of today's immigration battles.

RIVERSIDE, Calif. — In the U.S. debate over immigration, there is perhaps no word as controversial as "Aztlán," the name of the mythical Aztec homeland.

For many it carries potent political overtones, for others it is a romantic ideal, and to those opposed to illegal immigration it represents an effort to reclaim land that was once part of Mexico.

"Aztlán is a state of mind for some people. It's a point in history. For some, it's a political place. For some, it's a separate nation," said Armando Navarro, a University of California at Riverside ethnic studies professor whose views have generated controversy. "It represents land lost. You are sitting in a city, Riverside, that used to be in Mexico. That gives us a sense of entitlement. This was our land."

Though its definition is murky, the term has asserted itself in the language of today's immigration battles.

In Aztec folklore, Aztlán was believed to have been in northern Mexico, possibly along the western coast. Other accounts put it farther north, perhaps in what is now Arizona, Colorado or New Mexico.

During the Chicano rights movement of the 1960s, Aztlán became a powerful rallying cry for militants who spoke of a "reconquista," or reconquest, of the Southwest, turning it into an independent homeland for Hispanic people.

Now, a generation later, the word has lost is radical edge among Hispanic activists but continues to evoke emotions on both sides of the immigration debate.

"Up until recently, I dismissed the idea as a kooky fringe element, but if you look at the demonstrations and see the flags and hear people chanting that this is stolen land and 'We are reclaiming our lost land,' it sounds more serious," said Ira Mehlman, spokesman for the Federation for American Immigration Reform, which supports tough enforcement of immigration laws.

Mexico suffered huge territorial losses after its defeat in the U.S.-Mexican war. In 1848, Mexico signed the Treaty of Guadalupe Hidalgo ceding California, Utah and Nevada along with parts of Colorado, Arizona, New Mexico and Wyoming, to the United States.

But demographer Wayne Cornelius said he had seen little evidence that immigrants are looking to take back anything. "The overriding goal for Mexicans coming into U.S. today is, 'How can I succeed in this society?' There is no incentive for them to behave in the ways that the anti-immigration people allege they are behaving," said Cornelius, director of the Center for Comparative Immigration Studies at the University of California, San Diego. "There is no economic point to it."

But Aztlán is about more than lost land, it's about identity.

Over the decades, its name has been tacked onto Hispanic organizations such as MEChA (Chicano Student Movement of Aztlán) which has more than 300 chapters on college campuses nationwide. The group has been attacked by those who claim its 1969 "El Plan Espiritual de Aztlán" is a separatist call for reconquest.

"Aztlán belongs to those who plant the seeds, water the fields, and gather the crops and not to the foreign Europeans," according to the plan. "We do not recognize capricious frontiers on the bronze continent."

MEChA leaders say it is a historical document from a more radical time distorted by critics who focus on a few lines while missing the broader picture. "When did we say we wanted a separate nation? We never did," said Graciela Larios, who recently retired as head of the UC Riverside MEChA club. "We know about the spiritual plan for Aztlán. It reflects the time it was written in. We are not ashamed of it. We stand by it."

Some Hispanic scholars and activists see Aztlán as the birthplace of the Mexican people, a real place with a real history, not some legend.

"For us, it represents the migration of our people from the northern area," said Olin Tezcatlipoca, director of the Mexica Movement, an indigenous rights group based in Huntington Park, Calif., that believes North America is occupied by illegal immigrants from Europe. "The migration is a reality, the language is a reality, the reasons people migrate are a reality."

Even the definition of the word is debated. Some say Aztlán means "land of egrets," "land of herons" or "land of whiteness" in the Nahuatl language, spoken throughout Mexico and related to Hopi, Comanche and Paiute.

"It is a real place, it is also a cry from young Chicanos in America who go to school and never hear about their ancestry," said Cecilio Orozco, a retired professor at California State University, Fresno, who spent 27 years exploring the rivers and canyons of the American Southwest in search of Aztlán.

Orozco, 77, said he believes these early people migrated from the Great Lakes to southern Utah near the Four Corners region, where Arizona, New Mexico, Colorado and Utah meet. Perhaps spurred by drought, they eventually moved into Mexico, he said.

Roberto Rodriguez, a writer and expert on indigenous geography and human migration at the University of Wisconsin, has used old maps and oral tradition to do his own study of Aztlán. He also believes early Mexicans migrated from north to south.

"There is no doubt people have migrated and clear evidence that ancient Mexicans lived in the north," Rodriguez said. "Mexicans can never be alien because we are native people. We are part of a civilization that never went away. We all belong here."

But he dismisses talk of reconquista. "The right wing thinks there is some massive superstructure out there trying to retake Aztlán," he said. "If that were true, (such activists) would need a huge organi- zation."

Or just time, say some.

Navarro, the ethnic studies professor at University of California at Riverside, said his research showed that within 10 to 25 years, California, Arizona, New Mexico, Nevada, Texas and Utah will be 50 percent Latino.

"I call that re-Mexicanization, not reconquista," said Navarro, 64. "A new majority is forming. Everything will change. The White House will be within our reach. We might have to change the name to the Brown House."

That kind of talk — along with his latest book "Mexicano Political Experience in Occupied Aztlán" — has made Navarro the chief suspect for those who see reconquest afoot.

"We are keenly aware of the aggressive, militantly anti-American approach of many leaders of the Latino movement," said Chris Simcox, leader of the Minutemen, a volunteer border watch group. "Armando is one of the most militant leaders of that movement. They openly advocate violence."

Navarro's protests against the Minutemen and his predictions of a violent showdown between whites and Hispanics have earned him hate mail.

In David Horowitz's book "The Professors: The 101 Most Dangerous Academics in America," Navarro gets his own chapter. The author writes that Navarro "advocates the overthrow of the U.S. government by Latinos and reclamation of the southwestern United States by Mexico."

Navarro, in his office surrounded by photos of himself with Fidel Castro and former Nicaraguan leader Daniel Ortega, shakes his head. "I never said that," he said.

Still, he tries to allay fears of a resurgent Aztlán.

"There is no reconquista conspiracy. I have no CIA — no Chicano Intelligence Agency. There is no evidence to suggest there is some secret plan," he said.

"We are returning as a people to a place that was once ours. Does that mean I have dual loyalty? I was an officer in the U.S. Army for eight years. This is all a fabrication of fear-mongers."

Find this article at:
http://www.statesman.com/search/content/news/stories/nation/08/4aztlan.html
Posted by Angela Valenzuela at 11:21 AM