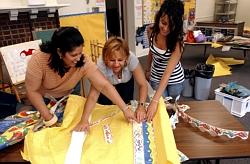 
photos by HEATHER EIDSON / STAFF PHOTOGRAPHER
(From left) Sally Roig-Flores helps Rosita Gonzalez pick out borders for Gonzalez' English as a Second Language board with Gonzalez' daughter, Gina, at Brady Elementary School in Aurora. Both Gonzalez and Roig-Flores are kindergarten bilingual teachers, and have the task of teaching their students to read and write in English and Spanish by the end of the school year. The majority of students at Brady School can speak Spanish.

Those who have worked in Aurora's school districts for many years have long watched as surging numbers of bilingual students flowed into their classrooms.

Now, teachers say their English as Second Language programs are changing, and bilingualism may one day become the standard of education.

"I think there is a lot of parent interest in educating their children in both languages," said Sally Roig-Flores, a bilingual kindergarten teacher at East Aurora's Brady Elementary School. "I think, in the future, our whole society will be learning to be bilingual."

When Rosita Gonzalez, who team teaches with Roig-Flores, started teaching in the East Aurora School District in 1987, there was only one bilingual class in most elementary grade levels.

But at Brady last year, kindergarten and first-grade classrooms where lessons were taught predominantly in Spanish outnumbered regular English sections three to one.

East Aurora's director of bilingual services, Anne Benavides, said she's seen the trend repeat itself throughout the district during her career.

When Benavides left the bilingual program 13 years ago to serve in other district positions, there were only about 1,700 students in the program. This summer, she ended the school year with a count of more than 4,200.

In the West Aurora School District, almost 900 students partake in the English Language Learners program. The program has grown over the years, "but it's not unmanageable," said Cynthia Latimer, assistant superintendent for student services.

Of those students, nearly 700 are enrolled in the Self-Contained/Instructional Bilingual Program. It is a K-12 program where Spanish serves as the students' first language. The goal is to implement English into the curriculum and exit those students, especially the younger ones, through the program in three years, when they're mainstreamed into general education.

"But it's important to remember that students progress at their own rate," Latimer said.

More than 100 students are in the Itinerant Transitional Bilingual Program (K-8), which means they're participating in general education taught in English, but still have one or two hours per week of bilingual study — used as a contact for support.


With tremendous growth comes surging needs. District officials often have a tough time finding enough highly qualified bilingual teachers to keep up with the growing number of classrooms and now they also need nurses, speech therapists, psychologists — "a whole gamut" of specialists — who know Spanish, Benavides said.
As part of his recently introduced Teaching and Learning Plan, West Aurora School Superintendent Jim Rydland has conducted audits on the entire district. Every program is receiving attention, and the Bilingual Program this school year falls in the evaluation stage. Should changes be suggested or required, based on student progress, they'll be developed and implemented in 2007-08.


Preparing for a bilingual society


As more students enroll in the program, district administrators have redefined how to teach English as a Second Language.
Whereas teachers in the East Aurora School District used to focus on training the student to speak English as quickly as possible before teaching them to read and then write in the language, Benavides said they now take a "balanced literacy" approach where students learn reading, writing and speaking in English at the same pace.

Teaching bilingual education is often a tricky task, Benavides said, because students need to learn more than conversational skills and learn the "academic language" needed to study subjects like science and higher-level mathematics.

Critics have argued that self-contained ESL classes only hinder students who should be mainstreamed into regular classrooms in order to pick up the language rapidly, but many bilingual educators say there are significant benefits to teaching younger students predominantly in their native languages.

"The reason, I believe, we use a transitional program is because it works," Latimer said.

The current bilingual program coordinator at West Aurora's Hill Elementary School, Claudia Rubio, moved to Aurora from Mexico in 1985 before the start of her freshman year at West High School. She spoke limited English, "just enough to have a conversation," she said.

During her first two years at West, Rubio studied in the bilingual program, while partaking in ESL daily. By her junior year, Rubio was a member of the National Honor Society, taking general education classes taught in English, "but still had the support of the bilingual program," she said.

"My goal was to become bilingual," Rubio said. "It really worked for me."

Maria Ponce, now a first-grade teacher in West schools at McCleery Elementary, is a product of the system. She partook in the bilingual education program in seventh grade at Jefferson Middle School and emerged in just a year and a half.

"Our teacher not only taught us English, but also about the culture," Ponce said. "I had a good base in Spanish, I knew how to develop my first language in both reading and writing, and it helped me in being able to transition it to English."

In East Aurora, young pupils just entering the bilingual program are first taught to read in their native language because educators have learned that it helps pupils develop the same skills needed to read in English. It also gives their parents, who often speak very little English, a chance to get involved and help with their students' school work, said Roig-Flores.

East Aurora administrators also have talked about one day exploring dual-language programs that would teach both Spanish and English in one class to students who are native speakers of either language.

"It's becoming more important for all individuals to be bilingual," Benavides said. "A person who is bilingual and biliterate will have greater opportunities."