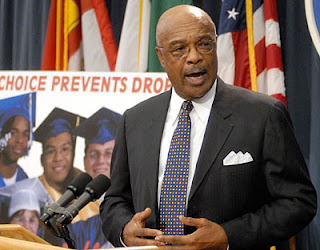 Rod Paige, former U.S. secretary of education and Houston Independent School District superintendent, speaks Monday morning at the Capitol about the need for reform in the Texas education system.

Each year, high school dropouts in the state of Texas cost taxpayers about $337 million in lost tax revenue, increased incarceration costs and increased Medicaid costs, according to a study released Monday by the Milton and Rose D. Friedman Foundation, the National Center for Policy Analysis, and the Hispanic Council for Reform and Educational Options.

The study, "The High Cost of Failing to Reform Public Education in Texas," found that the class of 2005 failed to graduate more than 119,000 Texas students based on U.S. Census Bureau data. Texas has a 67-percent graduation rate, the second-lowest rate in the country after Mississippi, according to the study .

Each dropout costs taxpayers about $3,168 each year after dropping out, a figure slightly higher than the $3,004 provided by the state government for each year the student is in school, according to the study.

To help combat this problem, Texas should implement a school-choice program allowing parents to choose which school their children attend, said Rod Paige, chairman of the Chartwell Education Group LLC and former U.S. Secretary of Education. School-choice programs would allow parents to choose between their zoned public school, a neighboring public school or a private school, he said. The program would increase competition between public and private schools, which have a more successful graduation rate, resulting in a decreased dropout rate, according to the study. The study claims this would save taxpayers billions of dollars.

Public schools are grossly underfunded, and school-choice programs would only take more funding away from the schools, said Linda Bridges, president of the Texas Federation of Teachers. With parents given the option of sending their children to private schools without having to pay tuition, some state funds would have to be given to these private schools, she said.

"We have been fighting this battle for many sessions," she said. "This is just another tactic to raise support for school choice."

School-choice programs would not harm public schools by decreasing their funding, Paige said. The same amount of money would still be available for educating Texas students, he said.

School-choice programs have been successful in decreasing dropout rates in cities such as Milwaukee and Phoenix, said Rebecca Nieves-Huffman, president and CEO of the Hispanic Council for Reform and Educational Options.

"School choice is a lifesaver for students in this program," she said.

Previous efforts in the Texas Legislature to pass bills relating to school choice programs have failed, said Toni Falbo, a UT educational psychology professor. Advocates of school choice have mostly given up because a legislative decision is unlikely, she said.

"The problem with school choice is that some parents choose and some parents don't," Falbo said. Parents may not have the money and resources to help their child into a better school system, she said.

The Texas Education Agency reported the class of 2005 graduated 84 percent of its students as opposed to the 67 percent published in the study. The study used a different method from the state to determine its 67 percent graduation rate, said Greg Forster, director of research for the Friedman Foundation and editor of the study.

A rally at the Texas Capitol last Wednesday in favor of school choice brought together about 1,000 Texas students, parents and teachers.
© Copyright 2007 The Daily Texan
Posted by Angela Valenzuela at 11:19 PM