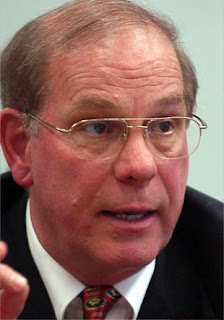 Voucher advocate wants state to take over private program
San Antonio businessman warns his $50 million, 10-year effort is due to end next year.

By Jason Embry
AMERICAN-STATESMAN STAFF
Wednesday, February 07, 2007
James Leininger, who has spent millions of dollars on Texas political campaigns, said Tuesday that the 2,000 students in the private school voucher programs he personally bankrolls will be "out on the street" if the Legislature does not approve a publicly funded voucher plan this year.

The San Antonio physician and businessman said his 10-year, $50 million commitment to fund a program for students in San Antonio's Edgewood school district is set to expire next year.

He wants the Legislature to step in and provide public money for those students — and other low-income students around the state — to attend private schools or transfer to other public schools.

"If the Legislature doesn't act, those kids are going to be out on the street," he said.

Leininger has been a quiet political force in recent years, shying away from public comment while giving pro-voucher candidates millions.

He spent about $5 million in the 2006 election cycle, according to Texans for Public Justice, which tracks campaign spending and advocates limits on campaign donations.

He is now shifting tactics by talking more openly about voucher programs, which he has said should be reserved for low-income students, and his own political activity.

In a lengthy interview Tuesday with the American-Statesman editorial board, he said one reason he's showing his face more is because his private program is almost out of money.

In response, Kathy Miller of the anti-voucher Texas Freedom Network said: "Private schools may be willing to put those kids out on the street, but the great thing about our neighborhood public schools is that they would never do that."

There appears to be little momentum at the Capitol this year for a publicly funded voucher program. The House could not pass a pilot voucher plan last year, and, by Leininger's count, he's lost five allies in the 150-member body since then.

House Speaker Tom Craddick and Lt. Gov. David Dewhurst support limited voucher programs, but neither sounded ready to make a hard sell for the issue when asked about it this week.

"I think we need to do a better job of being able to explain what it is that we're trying to accomplish to help at-risk kids and not undo public education," Dewhurst said.

Though the Senate avoided a public voucher debate last year, House members on both sides of the issue caught flak for their votes.

"A lot of House members feel like, at this point, it needs to come from the Senate to see if there's support for it before they get involved," Craddick said.

Gov. Rick Perry, a longtime voucher proponent, did not mention them in his 55-minute State of the State speech Tuesday.

"A lot of these (legislators) know there will be a price to pay if they embrace it," he said.

But the issue is by no means dead. Thousands of Texans, many of them families from private schools, are expected to rally for vouchers outside the Capitol today.

Leininger brought to the editorial board meeting Aimee Cantu, whose 10-year-old son uses a Leininger voucher.

Cantu said she wanted to shield her son from the violence and drugs that she remembers from public schools.

Leininger said he wants the Legislature to approve a voucher program in nine big-city districts, including Austin's. The voucher would be worth up to 90 percent of the per-student operating cost in the local district, with the district keeping the remaining 10 percent.

Schools that choose to take the voucher would have to follow federal and state nondiscrimination rules but would not have to change their admissions standards, Leininger said.

Some voucher opponents fear that private schools will accept only high-achieving students, but Leininger said his programs have proven otherwise.

"It's the kids who are having the worst time that choose," he said. "The ones that are doing great and they're in the National Honor Society aren't leaving."

Up to 20,000 students could get vouchers in the first year under Leininger's program, which has no legislative sponsor so far.

Leininger made a particularly big splash in last year's Republican primary, when he funded five challengers to anti-voucher GOP incumbents almost exclusively. Two of the challengers won. He indicated that he will continue to write checks to pro-voucher candidates.

But Miller, of the Freedom Network, didn't sound scared.

"The Legislature has rejected vouchers for more than a decade because Texans don't want vouchers," she said. "Nothing has changed about that."


Find this article at:
http://www.statesman.com/news/content/region/legislature/stories/02/07/7vouchers.html
Posted by Angela Valenzuela at 10:43 PM