1 in 10 Schools Are 'Dropout Factories' 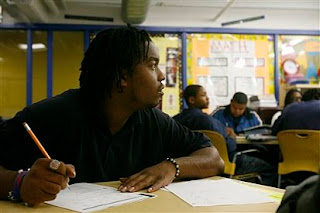 
This is a really tragic situation. I quote: "Nationally, about 70 percent of U.S. students graduate on time with a regular diploma. For Hispanic and black students, the proportion drops to about half." Also check out a state-by-state look at dropouts based on John Hopkins Professor Balfanz's national analysis of dropout factories.

By NANCY ZUCKERBROD
The Associated Press


It's a nickname no principal could be proud of: "Dropout Factory," a high school where no more than 60 percent of the students who start as freshmen make it to their senior year. That dubious distinction applies to more than one in 10 high schools across America.

"If you're born in a neighborhood or town where the only high school is one where graduation is not the norm, how is this living in the land of equal opportunity?" asks Bob Balfanz, the researcher at Johns Hopkins University who defines such a school as a "dropout factory."

There are about 1,700 regular or vocational high schools nationwide that fit that description, according to an analysis of Education Department data conducted by Johns Hopkins for The Associated Press. That's 12 percent of all such schools, no more than a decade ago but no less, either.

While some of the missing students transferred, most dropped out, Balfanz says. The data tracked senior classes for three years in a row 2004, 2005 and 2006 to make sure local events like plant closures weren't to blame for the low retention rates.

The highest concentration of dropout factories is in large cities or high-poverty rural areas in the South and Southwest. Most have high proportions of minority students. These schools are tougher to turn around, because their students face challenges well beyond the academic ones the need to work as well as go to school, for example, or a need for social services.

Utah, which has low poverty rates and fewer minorities than most states, is the only state without a dropout factory. Florida and South Carolina have the highest percentages. About half of high schools in those states classify as dropout factories.

"Part of the problem we've had here is we live in a state that culturally and traditionally has not valued a high school education," said Jim Foster, a spokesman for South Carolina's Department of Education. He noted that South Carolina residents once could get good jobs in textile mills without a high school degree, but that those jobs are now much harder to come by.

Federal lawmakers haven't focused much attention on the problem. The No Child Left Behind education law, for example, pays much more attention to educating younger students. But that appears to be changing.

House and Senate proposals to renew the five-year-old No Child law would give high schools more federal money and put more pressure on them to improve, and the Bush administration supports the idea.

The current law imposes serious consequences on schools that report low scores on math and reading tests, such as having to replace teachers or principals, but it lacks the same kind of teeth when it comes to graduation rates.

Nationally, about 70 percent of U.S. students graduate on time with a regular diploma. For Hispanic and black students, the proportion drops to about half.

The legislative proposals would:

Make sure schools report their graduation rates by racial, ethnic and other subgroups and are judged on those. That's to ensure schools aren't just graduating white students in high numbers, but also are working to ensure minority students get diplomas.

Get states to build data systems to keep track of students throughout their school years and more accurately measure graduation and dropout rates.

Ensure states count graduation rates in a uniform way. States have used a variety of formulas, including counting the percentage of entering seniors who get a diploma. That measurement ignores the fact that kids who drop out typically do so before their senior year.

Create strong progress goals for graduation rates and impose sanctions on schools that miss them. Most states currently lack meaningful goals, according to The Education Trust, a nonprofit that advocates for poor and minority children.

The current law requires testing in reading and math once in high school, and those tests take on added importance because of serious consequences for a school that fails. Critics say that creates a perverse incentive for schools to encourage kids to drop out before they bring down a school's scores.

"The vast majority of educators do not want to push out kids, but the pressures to raise test scores above all else are intense," said Bethany Little, vice president for policy at the Alliance for Excellent Education, an advocacy group focused on high schools. "To know if a high school is doing its job, we need to consider test scores and graduation rates equally."

Little said some students pushed out of high schools are encouraged to enroll in programs that prepare them to take the GED exam. People who pass that test get certificates indicating they have high-school level academic skills. But the research shows getting a GED doesn't lead to the kind of job or college success associated with a regular diploma.

Loretta Singletary, 17, enrolled in a GED program after dropping out of a Washington, D.C., high school that she describes as huge, chaotic and violent. "Girls got jumped, boys got jumped, teachers (were) fighting and hitting students," she said.

She said teachers had low expectations for students, which led to dull classes. "They were teaching me stuff I already knew ... basic nouns, simple adjectives."

Singletary said she loved science but wasn't offered it and her complaints to administrators went unanswered. "I was interested in experiments," she said. "I didn't have science in 9th or 10th grade."

A GED classmate of Singletary's is 23-year-old Dontike Miller, who attended and left two D.C. high schools on the dropout factory list. Miller was brought up by a single mother who used drugs, and he said teachers and counselors seemed oblivious to what was going on in his life.

He would have liked for someone to sit him down and say: "You really need to go to class. We're going to work with you. We're going to help you," Miller said. Instead, "I had nobody."

Teachers and administrators at Baltimore Talent Development High School, where 90 percent of kids are on track toward graduating on time, are working hard to make sure students don't have an experience like Miller's.

The school, which sits in the middle of a high-crime, impoverished neighborhood two miles west of downtown Baltimore, was founded by Balfanz and others four years ago as a laboratory for getting kids out on time with a diploma and ready for college.

Teachers, students and administrators at the school know each other well.

"I know teachers that have knocked on people's doors. They want us to succeed," 12th-grader Jasmine Coleman said during a lunchtime chat in the cafeteria.

Fellow senior Victoria Haynes says she likes the way the school organizes teachers in teams of four, each assigned to a group of 75 students. The teachers work across subject areas; English and math teachers, for example, collaborate on lessons and discuss individual students' needs.

"They all concentrate on what's best for us together," Haynes said. "It's very family-oriented. We feel really close to them."

Teachers, too, say it works.

"I know the students a lot better, because I know the teachers who teach them," said 10th-grade English teacher Jenni Williams. "Everyone's on the same page, so it's not like you're alone in your mission."

That mission can be daunting. The majority of students who enter Baltimore Talent Development in 9th grade are reading at a 5th or 6th grade level.

To get caught up, students have 80-minute lessons in reading and math, instead of the typical 45 minutes. They also get additional time with specialists if needed.

The fact that youths are entering high schools with such poor literacy skills raises questions about how much catch-up work high schools can be expected to do, say some high-school principals.

"We're at the end of the process," says Mel Riddile, principal of T.C. Williams High School, a large public school in Alexandria, Va., which is not on the dropout factory list. "People don't walk into 9th grade and suddenly have a reading problem."