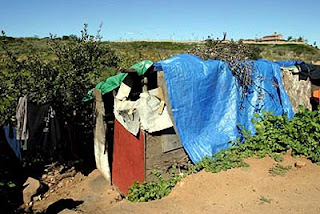 The relief efforts in the Southern California fires have been praised as effective, but they've missed a population that has long been in the shadows: undocumented workers living along San Diego's hillsides and canyons. These men, who represent some of the most essential workers in one of the biggest local industries, have slipped through the cracks in the county's relief and evacuation efforts - so much so that Mexican government officials are filling in the gaps.

"The Mexican Consulate are the ones who have led the relief effort to the farm workers in the canyons," says Eddie Preciado, director of La Posada de Guadalupe, the only homeless shelter for male farm workers in San Diego County. He says the consulate has organized partnerships with groups like his in order to conduct searches and provide supplies to the canyon dwellers.

Immigrant advocacy groups are uncertain how these workers are surviving. They say the fires have left the workers scattered and unaccounted for. Evacuation orders have closed off access to these communities, making it very difficult for support teams to assess the population's needs and nearly impossible to determine how many living quarters have been destroyed in the fires.

The farm workers are hard to reach physically, living in the remote areas of the canyon, but they are also linguistically isolated. Many are members of Mexico's indigenous Mixtec and Zapotec communities and do not speak English or Spanish.

"Indigenous Mexicans who speak languages such as Mixteco are at high risk of being in danger because they don't understand warnings being given in English or Spanish and they are not likely to trust people unless they are approached speaking their language," says photojournalist David Bacon, who has documented farm worker communities in rural California.

It has been estimated that there are more than 1,600 agricultural workers and day laborers living in the area in makeshift settlements, according to the Regional Task Force on the Homeless in San Diego. This is probably a low estimate of those affected by the fires because it is impossible to know exactly how many workers live this way. Described as "rural homeless," they scrape by without electricity, a water supply, or sanitation systems in order to be close to the farms where they work.

These workers make up an essential agricultural labor force in San Diego County, which is one of the top agricultural producers in California and ranks second in the nation in its number of farms, according to the Regional Task Force on the Homeless.

Yet despite the industry's reliance on these laborers, they could be left out of the Federal Emergency Management Agency (FEMA)'s relief aid because, without papers, they have very limited access to FEMA funds.

Konane Martinez of the National Latino Research Center anticipates that documentation will be a requirement for most federal government agencies providing relief in the area. As a result, Martinez is collaborating with 18 different organizations to collect money and resources for displaced farm workers looking for aid once the fires subside.

"I don't think anyone will be turned away from immediate assistance," says Dorothy Johnson, an attorney with California Legal Rural Assistance, which provides farm workers with legal support. And though no one has reported being denied help, many undocumented immigrants are not seeking aid because they do not know which rescue workers they can trust. Many see the risk of deportation as more dangerous than the fires themselves.

"I wouldn't be surprised if they avoided firefighters," says Bacon, adding that many undocumented workers are wary of law enforcement for fear of being detained or deported.

"Many of these workers have experienced intense situations of danger just to get into the United States," and earn money to send to their families back home, explains Bacon. They are willing to endure very harsh conditions, he says, to avoid being caught by Border Patrol or ICE agents.

The Spanish-language publication Enlace, in San Diego, reported on Monday that some farm workers have chosen to remain in the canyons despite warnings to evacuate because they do not want to leave.

Meanwhile some who do are not being allowed to leave. "Some farmers are not following evacuation orders and have kept workers in the fields despite orders being given to evacuate," says Christian Ramirez of the American Friends Service Committee.

But if they stay they should know that, as Ramirez explains, "the atmosphere conditions are not safe to be working in." His organization has been sending volunteers into the fields to supply farm workers with eye drops, facemasks and goggles.

Apparently unconcerned that the use of Border Patrol agents might discourage undocumented residents from seeking help, the San Diego County Office of Emergency Management called on the U.S. Border Patrol to help with the emergency relief efforts. Matthew Johnson says about 300 agents are now "watching for looters, monitoring affected neighborhoods and safety control" during the fire relief efforts.

Some agents were working alongside local police when six undocumented immigrants were arrested Wednesday outside of Qualcomm Stadium, one of the main fire relief sites.

Those arrested were reportedly seen stealing relief supplies consisting of fold-up cots and bottles of water from Qualcomm. Police Sgt. Jesse Cesena told the San Diego Union-Tribune that "they were stealing from the people in need." The police turned the immigrants over to Border Patrol agents.

Although they are busy with local relief efforts, Johnson says the Border Patrol is still watching the border. Since the start of the fires, he says, they have apprehended 200 immigrants trying to cross into the United States.

In fact, he predicts, immigrant workers will be needed in reconstruction efforts after the fire. More than 410,000 acres of land have burned, and clean-up efforts will be critical. "With more than 1000 homes being demolished," he notes, "contractors will be looking to immigrant labor forces to demolish, cart away, and rebuild houses."

"We saw it New Orleans," says Estrada. Undocumented immigrants from Mexico and Central America were among the largest groups employed in rebuilding the city after Hurricane Katrina.

"At the time of reconstruction, nobody bothered them. It will be interesting to see," says Estrada. "They will be bringing back a labor force they have been trying to get rid of."

Email ThisBlogThis!Share to TwitterShare to FacebookShare to Pinterest
Labels: racism