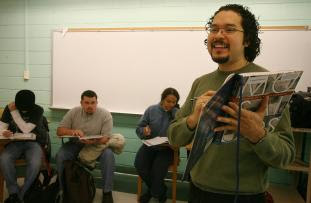 Joseph and I go back a long way. He won't mind me saying that he is "Rodrigo" in Chapter 3 of Subtractive Schooling." His story always touches me so—and it still does. It's so nice to see him grow up to continue being the wonderful, kind, smart, and giving human being that I knew when he was a teenager, surviving difficult circumstances in Houston's East End. His life and story are a continuing inspiration to me. -Angela

By THE GOODFELLOWS EDITOR

Joseph Rodriguez grew up in Houston's east end in the 1970s. His family was bilingual and working class.

The youngest of four children, Rodriguez was the son of a pipe fitter and a homemaker.

"My parents worked hard to provide the things that we needed; there simply wasn't money for much, if anything extra," he said.

But each holiday season his mother would encourage him, his brother and two sisters to write letters to Santa — in both English and Spanish. And, each year, a colorful postcard would arrive in the mail, inviting the family to pick up their holiday toys.

As a child, Rodriguez never really thought about where the toys came from, never realized that the family budget didn't allow for "extras."

"However, as I grew older I realized that the toys came from a community of Santa's helpers working behind the scenes very humbly, very low-key," Rodriguez said.

Rodriguez and his siblings are four of the millions who have been served in the 95-year-old Goodfellows program, which Rodriguez now proudly promotes, including financially.

Goodfellows, which benefits needy children ages 2 through 10, is funded by contributions from the public. All the money collected is used to buy gifts. The Houston Chronicle pays other costs.

The director of the University of Houston's Language Acquisition Center, Department of Hispanic Studies and Department of Modern and Classical Languages, Rodriguez lauded the toys given by the program.

"The toys are all age-appropriate and promote learning. I remember receiving books that allowed me to begin my home library, and a pogo stick," Rodriguez said, adding that he truly appreciated the effectiveness of the toys while in graduate school and studying how play impacts child development.

Western-themed toys fueled his imagination and daydreams of life as a cowboy on the open range.

The professor also said he has cherished memories of the entire family sitting on the floor, working puzzles.

"That was the impressive thing — the toys taught problem-solving and allowed us to work together as a family," he said.

Rodriguez, the founder of the East End Education Project, said he has "worked in the schools and seen the need" for the Goodfellows program.

He added that his siblings also promote the program.

"My eldest sister publicizes Goodfellows at her church, at school," he said.

"Goodfellows gives hope to many families, helps them bring joy to children who otherwise wouldn't have as much," he said.

Checks for tax-deductible contributions can be mailed to Goodfellows, P.O. Box 4260, Houston, TX, 77210-4260, or made online at www.chron.com/goodfellows.

Here is how to apply for Christmas presents from Goodfellows:
Contact us: Write to Goodfellows, care of the Houston Chronicle, P.O. Box 4260, Houston, TX, 77210-4260, or e-mail goodfellows@chron.com. List a street address (no post office boxes, please), including ZIP code, and the names and ages of the children ages 2 through 10. Include a daytime telephone number, if available. Applications must be in Goodfellows' hands no later than 5 p.m. Dec. 11. If applicants wish to do so, they may include a brief description of the problems that prompted them to contact Goodfellows.
Collecting gifts: Families will be notified by mail with information about when and where to pick up gifts.
Posted by Angela Valenzuela at 10:14 AM