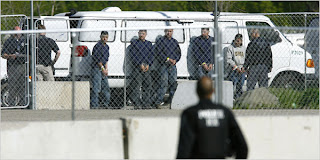 WATERLOO, Iowa — In temporary courtrooms at a fairgrounds here, 270 illegal immigrants were sentenced this week to five months in prison for working at a meatpacking plant with false documents.

The prosecutions, which ended Friday, signal a sharp escalation in the Bush administration’s crackdown on illegal workers, with prosecutors bringing tough federal criminal charges against most of the immigrants arrested in a May 12 raid. Until now, unauthorized workers have generally been detained by immigration officials for civil violations and rapidly deported.

The convicted immigrants were among 389 workers detained at the Agriprocessors Inc. plant in nearby Postville in a raid that federal officials called the largest criminal enforcement operation ever carried out by immigration authorities at a workplace.

Matt M. Dummermuth, the United States attorney for northern Iowa, who oversaw the prosecutions, called the operation an “astonishing success.”

Claude Arnold, a special agent in charge of investigations for Immigration and Customs Enforcement, said it showed that federal officials were “committed to enforcing the nation’s immigration laws in the workplace to maintain the integrity of the immigration system.”

The unusually swift proceedings, in which 297 immigrants pleaded guilty and were sentenced in four days, were criticized by criminal defense lawyers, who warned of violations of due process. Twenty-seven immigrants received probation. The American Immigration Lawyers Association protested that the workers had been denied meetings with immigration lawyers and that their claims under immigration law had been swept aside in unusual and speedy plea agreements.

The illegal immigrants, most from Guatemala, filed into the courtrooms in groups of 10, their hands and feet shackled. One by one, they entered guilty pleas through a Spanish interpreter, admitting they had taken jobs using fraudulent Social Security cards or immigration documents. Moments later, they moved to another courtroom for sentencing.

The pleas were part of a deal worked out with prosecutors to avoid even more serious charges. Most immigrants agreed to immediate deportation after they serve five months in prison.

The hearings took place on the grounds of the National Cattle Congress in Waterloo, in mobile trailers and in a dance hall modified with black curtains, beginning at 8 a.m. and continuing several nights until 10. On Wednesday alone, 94 immigrants pleaded guilty and were sentenced, the most sentences in a single day in this northern Iowa district, according to Robert L. Phelps, the clerk of court.

Mr. Arnold, the immigration agent, said the criticism of the proceedings was “the usual spate of false allegations and baseless rumors.”

The large number of criminal cases was remarkable because immigration violations generally fall under civil statutes. Until now, relatively few immigrants caught in raids have been charged with federal crimes like identity theft or document fraud.

“To my knowledge, the magnitude of these indictments is completely unprecedented,” said Juliet Stumpf, an immigration law professor at Lewis & Clark Law School in Portland, Ore., who was formerly a senior civil rights lawyer at the Justice Department. “It’s the reliance on criminal process here as part of an immigration enforcement action that takes this out of the ordinary, a startling intensification of the criminalization of immigration law.”

Defense lawyers, who were appointed by the court, said most of the immigrants were ready to accept the plea deals because of the hard bargain driven by the prosecutors.

If the immigrants did not plead guilty, Mr. Dummermuth said he would try them on felony identity theft charges that carry a mandatory two-year minimum jail sentence. In many cases, court documents show, the immigrants were working under real Social Security numbers or immigration visas, known as green cards, that belonged to other people.

All but a handful of the workers here had no criminal record, court documents showed.

“My family is worried in Guatemala,” one defendant, Erick Tajtaj, entreated the federal district judge who sentenced him, Mark W. Bennett. “I ask that you deport us as soon as possible, that you do us that kindness so we can be together again with our families.”

No charges have been brought against managers or owners at Agriprocessors, but there were indications that prosecutors were also preparing a case against the company. In pleading guilty, immigrants had to agree to cooperate with any investigation.

Chaim Abrahams, a representative of Agriprocessors, said in a statement that he could not comment about specific accusations but that the company was cooperating with the government.

Aaron Rubashkin, the owner of Agriprocessors, announced Friday that he had begun a search to replace his son Sholom as the chief executive of the company. Agriprocessors is the country’s largest producer of kosher meat, sold under brands like Aaron’s Best. The plant is in Postville, a farmland town about 70 miles northeast of Waterloo. Normally it employs about 800 workers, and in recent years the majority of them have come from rural Guatemala.

Since 2004, the plant has faced repeated sanctions for environmental and worker safety violations. It was the focus of a 2006 exposé in The Jewish Daily Forward and a commission of inquiry that year by Conservative Jewish leaders.

In Postville, workers from the plant, still feeling aftershocks from the raid, said conditions there were often harsh. In interviews, they said they were often required to work overtime and night shifts, sometimes up to 14 hours a day, but were not consistently paid for the overtime.

“We knew what time we would start work but we did not know what time we would finish,” said Élida, 29, a Guatemalan who was arrested in the raid and then released to care for her two children. She asked that her last name not be published because she is in this country illegally.

A 16-year-old Guatemalan girl, who asked to be identified only as G.O. because she is illegal and a minor and was not involved in the raid, said she had been working the night shift plucking chickens. “When you start, you can’t stay awake,” she said. “But after a while you get used to it.”

The workers said that supervisors and managers were well aware that the immigrants were working under false documents.

Defense lawyers, who each agreed to represent as many as 30 immigrants, said they were satisfied that they had sufficient time to question them and prepare their cases. But some lawyers said they were troubled by the severity of the charges.

At one sentencing hearing, David Nadler, a defense lawyer, said he was “honored to represent such good and brave people,” saying the immigrants’ only purpose had been to provide for their families in Guatemala.

“I want the court to know that these people are the kings of family values,” Mr. Nadler said.

Judge Bennett appeared moved by Mr. Nadler’s remarks. “I don’t doubt for a moment that you are good, hard-working people who have done what you did to help your families,” Judge Bennett told the immigrants. “Unfortunately for you, you committed a violation of federal law.”

After the hearing, Mr. Nadler said the plea agreements were the best deal available for his clients. But he was dismayed that prosecutors had denied them probation and insisted the immigrants serve prison time and agree to a rarely used judicial order for immediate deportation upon their release, signing away their rights to go to immigration court.

Christopher Clausen, a lawyer who represented 21 Guatemalans, said he was certain they all understood their options and rights. Mainly they wanted to get home to Guatemala as quickly as possible, he said.

“The government is not bashful about the fact that they are trying to send a message,” Mr. Clausen said, “that if you get caught working illegally here you will pay a criminal penalty.”

Robert Rigg, a Drake University law professor who is president of the Iowa Association of Criminal Defense Lawyers, said his group was not consulted when prosecutors and court officials began to make plans, starting in December, for the mass proceedings.

“You really are force feeding the system just to churn these people out,” Mr. Rigg said.

Kathleen Campbell Walker, president of the American Immigration Lawyers Association, said that intricate issues could arise in some cases, for example where immigrants had children and spouses who were legal residents or United States citizens. Those issues “could not be even cursorily addressed in the time frame being forced upon these individuals and their overburdened counsel.”

Linda R. Reade, the chief judge who approved the emergency court setup, said she was confident there had been no rush to justice. In an interview, Judge Reade said prosecutors had organized the immigrants’ detention to make it easy for their lawyers to meet with them. The prosecutors, she said, “have tried to be fair in their charging.”

The immigration lawyers, Judge Reade said, “do not understand the federal criminal process as it relates to immigration charges.”
Posted by Dr. Patricia D. López at 11:26 AM

Email ThisBlogThis!Share to TwitterShare to FacebookShare to Pinterest
Labels: immigration