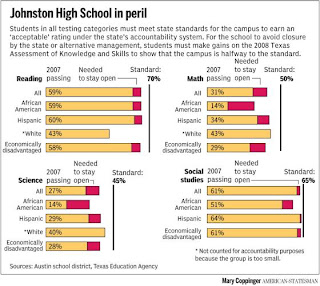 If chronically low performing East Austin school fails to meet academic standards this year, state could close it or put it under alternative management.

The Austin school district is hoping to create a new vision for Johnston High School that will allow the district to retain some control of the academic programs and follow state education officials' requirements for dealing with chronically low-performing schools that fail to improve.

However, it is unclear whether trustees can agree on a new vision for the East Austin school and whether such a plan would be acceptable to state Education Commissioner Robert Scott and allowable under state law.

Under the state's accountability system for schools, Johnston could be closed if it again fails to meet testing and attendance standards.

But with the help of state Sen. Kirk Watson, D-Austin , school district officials have sketched out a rough plan, without specifics, to create an unconventional instructional program at Johnston that could be modeled after the technology program at Akins High School or the alternative self-paced program at Garza High School. District administrators plan to come up with a more specific plan in the next few weeks after having Johnston parents visit such programs.

Whether the entire school board and the Johnston community will back the administration's new vision plan is uncertain, however.

Some say the timing is too short. Scott is expected to make a decision about the future of the school by mid-June, after seeing the results of the Texas Assessment of Knowledge and Skills exam.

Others question whether the district's plan will be different enough from, or more effective than, what has already been tried. Two years ago, Johnston underwent a state-approved redesign of its academic programs that divided the campus into small learning academies that allowed students to choose electives that focus on science, such as engineering, and the arts, such as filmmaking. Since then, the school has made another shift, to the First Things First program, which focuses on establishing stronger relationships among students and their families and school staff members.

Despite those programs, state figures show that fewer than one of every five of Johnston's 711 students passed all portions of the TAKS in 2007.

Furthermore, state law appears to leave Scott with little leeway. The Texas Administrative Code outlines the rules for how the state should deal with campuses that have been deemed "unacceptable" under the Texas accountability system, which considers achievement test scores and dropout rates. Johnston has failed to meet the acceptable standard for the past four years. If the students fail again this year, Scott must either close the school or put it under alternative management.

"While I can appreciate the community's concerns about the future of Johnston High School, as commissioner of education, I am bound by the law," Scott said. "I will continue to work with Sen. Watson, the district and the community to provide a quality education for these students."

Johnston would be among the first schools in the state — others include campuses in the Houston, North Forest and Waco districts — subject to the most extreme censure possible under the state's accountability system.

If closed, Johnston could be reopened with the commissioner's approval. However, it would be required to have a new name and principal and a mostly new teaching staff, and it would have to either serve entirely new grade levels or not serve more than 50 percent of the same students. Under alternative management, another school district or a nonprofit organization such as a charter school would take over instructional programs. The law stipulates that the commissioner can put Johnston under new management only if there is a reasonable expectation that the school will be rated "acceptable" again in three years.

Johnston Principal Celina Estrada-Thomas and trustees said they would prefer the school to remain open to children in the neighborhood and under the district's control, and Watson, a former Austin mayor, said he has hope that Scott will consider other options.

"In my conversations with the commissioner, I have been impressed with his willingness to listen to concerns that I've had, and that the school district has had, related to the potential closure of Johnston," Watson said. "The law requires certain things. However, we will continue to work with the commissioner to see how within the law we can meet the specific needs of the community and the district."

Superintendent Pat Forgione said he was confident as well. "I believe our commissioner and our state agency is looking to partner with us," Forgione said.

The trick is coming up with a proposal to present to Scott that parents and trustees support.

Roxanne Perez, a Johnston parent, said she isn't convinced that another program is the best answer and questioned the district's commitment to meaningful parent involvement.

"I feel like the wheels are already in motion," she said.

After parents and administrators visit programs at schools in Austin, Manor and possibly other cities, the district intends to compile community recommendations and collect letters of intent from groups that would help set up such programs to submit to the Texas Education Agency in early June.

Trustee Vincent Torres said he has reservations about the lack of thought and time that administrators are putting into the new vision and warned that he would be a tough sell with the clock counting down to June.

"Right now, I think the thing you guys are lacking is credibility," he said at a board meeting last week. "I don't want those kids to be another experiment. You think you folks can come up with what you need in three weeks?"

District administrators, meanwhile, have not identified exactly which programs they will look at during the site visits and admit that they won't be able to put any new plan in place before the 2009-10 school year. Patti Everitt, the district's director of redesign, said administrators hope to stay in control at Johnston for one more year and plan to continue some of the more successful programs that were started this year at the school, including one to help boost attendance that involved having parents patrol neighborhoods.

District officials have noticeably refrained from talking about visiting charter schools or about exploring the alternative management option.

Trustee Karen Dulaney Smith said board members don't want to be presumptive about their options but do want to send the message that the district isn't ready to give up.

"I do have confidence that there isn't anyone out there that's going to come up with options that are better than what we will explore."
Posted by Dr. Patricia D. López at 10:52 AM