The extent to which schools track and Latino/a youth should concern us all. It's important to be critical of conversations surrounding the issue of college OR workforce readiness standards. There's a long history of education reform efforts using curricular tracking methods to funnel Latino/a children in two direction, and many times these practices are informed by school's perception of students as mentioned in this article.

I'm anxious to see if and how the possible appointment of Thelma Melendez de Santa Ana will help in addressing Latino/a, and more specifically ELL students' needs.

When Richard Gomez was young, his father discouraged him from going to college.

"My dad was saying, 'No, you're the oldest of eight. You need to graduate and go to work,'" Gomez said.

But Gomez, now coordinator for educational equity at the State Office of Education, went to college anyway after a counselor told him he was "college material."

It's the type of encouragement Gomez said is essential to keeping Latino students -- who might not otherwise envision the same futures as their white peers -- in school. Experts say a number of systemic and personal challenges keep many Latino students from graduating.

Some face economic pressures such as having to work -- or wanting to drop out of school -- to help support their families. Others struggle to fulfill high school requirements in a language they're still learning. Some students who are in the U.S. illegally --- about 7 percent of Latinos younger than 18 -- see no point in finishing school, knowing it will be difficult to secure scholarships and professional jobs, experts say. Others have parents who didn't graduate and can't prepare them for college the same way other parents might, said Patricia Dark of the Utah Hispanic Chamber of Commerce.

Still, Latino students as a group are diverse, yet they sometimes are tracked into lower-level classes based on the assumption they all struggle academically, Gomez said. 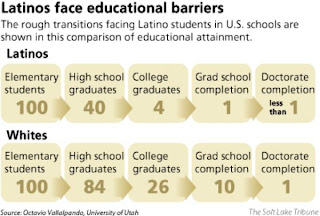 "A lot of policies, practices and structures in place, some written and some not, have the overall effect of sending a clear message to kids of color that they're really not valued in our high schools," said Michael Wotorson of the Campaign for High School Equity, a Washington, D.C.-based coalition.

For example, Latino students comprised about 8 percent of Utah's Class of 2008, but made up only 5 percent of those who took Advanced Placement exams. East High junior Margarita Rodriguez said she was the only person of color in one of her honors classes.

"You felt uncomfortable like you didn't belong," she said. "People just don't think you can do as much."

Gomez said placing Latino students into lower-level classes is the type of inadvertent practice that makes some feel schools don't value them. Students who don't feel valued are more likely to drop out, said Theresa Martinez, assistant vice president for academic outreach at the University of Utah. "If they knew that ahead of them was a six-figure salary and they would be treated fairly, they would keep going to school," Martinez said. "But they don't see that."
Posted by Dr. Patricia D. López at 12:10 AM