An Open Letter to Arne Duncan

Some pretty strong words by Kress (pictured here). For those who are not fully aware of his background you can check out a short bio here.

This letter seems to be ignoring the detrimental effects that have come out of NCLB's punitive approach. To caption a system that incentivizes schools and districts to view students as liabilities, push them from their campus', and undermines their opportunities for learning as a step forward in civil rights just doesn't set well with me. 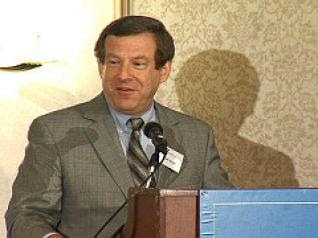 Mr. Secretary, first, I want to congratulate you for a superb year. You pushed solid reforms intelligently and effectively. In doing so, you helped President Obama nobly carry the baton he received from Presidents Clinton and Bush in the effort to improve education for all students, particularly the disdvantaged.

But, I must confess to being baffled by today's story in The New York Times about the direction you're headed. If it is inaccurate, I apologize in advance for assuming it to be true. If it is true, however, I am disappointed.

You are said to want to abandon (not fix, change, extend, but rather abandon) the bipartisan goal set 9 years ago in NCLB of having students at the minimum bar of grade level proficiency by 2014. Apparently, this goal is "utopian," in your mind.

Yet, you have separately said that the standards behind these goals for 2014 are "fraudulently low" and that they should be dramatically raised to "college/career ready." You'll get no argument from me about raising the bar.

But look at the whole of what you're proposing. We can't make the lower bar, you say, so, while eliminating that goal, you're out to set a much higher bar.

This is akin to saying though we can't high jump at 5 feet, let's set the bar at 7 feet!

Or, reflecting on President Kennedy's goal of putting a man on the moon in a decade, it's as if, having trouble getting to the goal mid-decade, we should have discarded it and simply declared we'll put a man on Jupiter!

I don't know whether getting a man on the moon in the sixties was more or less "utopian" than getting our students to the minimum goal of "grade level" over 12 years. What I do know is that scrapping that goal and replacing it with a much tougher and higher goal with no challenging annual markers and deadlines for its achievement is real fraud.

Further, according to the story, you favor dropping adequate yearly progress and judging schools in a more "nuanced" way. I suspect this fits with your pledge to "loosen" NCLB.

Mr. Secretary, here's the secret: despite all the moaning and groaning, NCLB is plenty loose. It not only allows states to set the standards, determine the tests, and set performance standards; it also lets the states establish their own accountability sysytems and further permits the states and districts to apply appropriate consequences of their choice for failure to make AYP from a broad list of consequences in the statute.

Really the only place NCLB is "tough" (and this toughness is what essentially makes it the major step forward in civil rights that it is) is that it really insists that consequences be applied when poor, minority, and/or disabled students are not making academic progress in reading and math with their peers. The states and districts can have all the "nuance" they want above and beyond, but they can't rig their accountability systems to ignore or fail to act on this baseline expectation of equity. That is why the law is called "No Child Left Behind."

You say you are committed to closing the achievement gaps. If that is true, you will not weaken this basic feature of NCLB.

Greater differentiation or use of growth along the lines of the steps Secretary Spellings made, fine. Other reasonable fixes, fine. But when fixes become "loosening" or weakening," you will go down a path that you will regret.

I predict that, whatever euphemism you give it and however many carrots you create with increased spending, if you weaken the accountability provisions of NCLB, we will see a serious falloff in achievement for students, particularly disadvantaged students. This will be bad for you and those who go along with these polcies, even worse for the country, but certainly worst for those students whose progress the ESEA was created in the first place to promote.

I am not clear, as to Eliza's question this morning, about whether the politics will support reauthorization in 2010. But, whatever the calculus, I can possibly see a product that reflects greater spending along with greater accountability and choice. What I can't see is greater spending with less accountability and choice. That formula is both bad politics and bad policy.

For what it's worth, my advice is to spend 2010 sticking to, and learning from, deployment of RttT and other "carrots." You're on the right track. Make your current program work well. That's plenty tough enough duty.

Then - lessons learned, a coalition built, and elections over - perhaps a solid reauthorization could be achieved in 2011.

But - mark my words - a reauthorization that emasculates the accountability of NCLB will not only be a huge mistake; it will counter and ruin all the worthwhile work you're doing.
Posted by Dr. Patricia D. López at 11:16 AM