Hi folks. I'm posting a couple of news items that came out of our conference last week. By all accounts, it was hugely successful. For those of you who came, a heartfelt thanks for being there on one of the nastiest days of the year (at least in the morning when the roads were icy!). 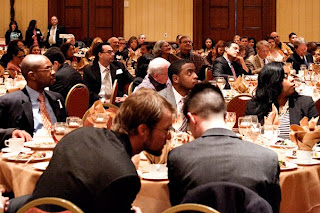 K-12 schools face $11 billion in cuts as the state attempts to balance a $27-billion budget shortfall. Rather than looking to improve education, educators and policymakers are now wondering whether they will be able to adequately run schools at all.

At the Texas Center for Education Policy’s annual Leading the Nation conference, 200 teachers, administrators and legislators met Wednesday to discuss the challenges that the state’s public education system faces over the next two years.

“Our priorities are out of order,” said Paul Sadler, the former chairman of the Committee on Public Education in the Texas House of Representatives, in his keynote address. “The day that we as policymakers forget the importance of education, we stop helping our children and begin hurting them.”

“Legislators, including our governor, are putting education on the back burner. [Austin] cannot function economically as a city of Texas, much less of the United States, without proper education for all of our children,” she said.

Because more funding is not presently an option, educators are looking elsewhere for possible sources of revenue.

“We need to look at the consolidation of costs and resources,” said Laura Alcorta, the director of federal programs for Round Rock ISD. “Look at our school districts — we have over 1,000 [in Texas]. If a single metropolis gets to have 10 school districts, they also get 10 superintendents and 10 administrative offices. All of those extra people could be consolidated and the extra money would go straight into the schools themselves.”

Administrative staffers make almost $27,000 more than teachers on average, according to Texas Education Agency data. Austin ISD cut 113 administrative jobs during the past year and aims to cut another 50 to 100 over the coming year. Still, the number of jobs to cut remains at 485 for AISD, with 421 of those being teaching positions, according to the Austin American-Statesman.

“We need to start having the conversation, but the interest is not there, and it is sad to see that,” Alcorta said.

State Sen. Royce West, D-Dallas, disputed the state Legislature’s dedication to education.
“You, the teachers and administrators, need to act as advocates for education and make sure we provide adequate funding,” he said. “The best investment we can make is ensuring we have the resources needed for successful schools.”

He excused himself shortly after to attend a finance meeting set to focus on the state budget with special emphasis on the allocation of funding for public schools.
Posted by Angela Valenzuela at 11:26 AM