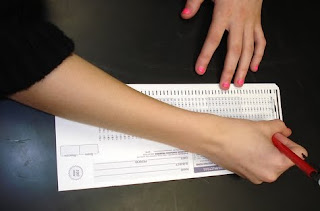 In the fall, the anticipated consequences of a $4 billion reduction in state financing to school districts will begin to become apparent to Texas students and their parents: fewer teachers, bigger classes and sparse extracurricular programs.

For some, though, the most drastic change will come in the spring, when the state’s approximately 350,000 new ninth graders will be the first to take the end-of-course exams that are part of the new standardized testing system known as STARR, the State of Texas Assessments of Academic Readiness.

The new assessment program, which is so complex that the superintendent of the Perrin-Whitt school district nicknamed it the Franken-STAAR, was established during the 2009 legislative session. Some educators welcome the program, a significant overhaul of the current system, but others view it with trepidation.

Outside the classroom, the burden of rolling out the new exams will fall primarily on counselors, who help students meet graduation requirements, and on curriculum specialists, who make sure what students are being taught matches with what they are being tested on. Some districts also employ testing coordinators, who handle scheduling and the actual administration of the exams.

But predicting reduced state aid, many districts have already eliminated many nonclassroom positions for the coming school year. That means remaining employees will have far more responsibilities, a particular concern for school counselors, who have long worked to define their role as separate from that of testing coordinators.

“With finances like they are, there’s not going to be extra people to help,” said Sherry Sunderman, the coordinator of guidance and counseling at Conroe Independent School District in Montgomery County, north of Houston.

Many counselors worry they will be given more duties on the testing side and that instead of advising students, their jobs will become “more clerical,” said Sylvia Lopez, the director of Dallas ISD’s counseling services. Resources traditionally devoted to counseling students on career and college plans may now be used to explain and administer the new testing system, which includes complicated new graduation requirements.

Counselors “are going to have to be really monitoring students’ graduation programs to make sure they are taking the right courses and passing the right exams,” said Casey McCreary, an assistant executive director at the Texas Association of School Administrators who advises districts on accountability issues.

Students adjusting to the new exams face a “triple jeopardy,” McCreary said. With STAAR, high school students will have to perform better on harder tests and take more of them. Under the current system, standardized tests do not count toward final grades, and students must pass four exit-level exams to graduate. Now, for the first time, students will have to achieve a cumulative score across 12 end-of-course exams to graduate. And their scores on the exams will count toward 15 percent of their final grade, with the option to retake the exam three times if they do not pass. (They are required to retake it if they do not achieve a certain minimum score.)

That could have students playing a game of risk with their scores — opting not to retake one test with the hope of scoring higher on a future one. Setting up a process to guide students through these decisions, one that involves parents and a “team effort” between curriculum specialists and counselors, is crucial in preparing for the new tests, said Sara McAndrew, the executive director of curriculum and instruction at Northside ISD, the state’s fourth-largest district, in San Antonio.

As the new school year draws closer, McAndrew said, schools are still missing details about how the rollout will work. Though the Texas Education Agency will unveil sample questions in August, it will not publicly release full-length primary test forms until 2014. “We are still a little in the dark about exactly what these tests are going to look like,” she said.

Lopez said she also has questions about the new system, like “who is going to keep track of the kids and where they are and how many exams they’ve taken.”

But she said that she expected growing pains. “Anytime there is a change like this, there is going to be a struggle,” Lopez said. “There is always a transitional period. STAAR is going to be a lot more rigorous, but hopefully this will help our kids.”
Posted by Dr. Patricia D. López at 10:02 PM