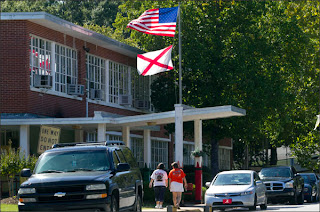 Mothers arrive to pick up their children from Flowers School in Montgomery, Ala. Hispanic students have started vanishing from Alabama public schools in the wake of a court ruling that upheld the state's tough new law cracking down on illegal immigration. Education officials say scores of immigrant families have withdrawn their children from classes or kept them home, afraid that sending the kids to school would draw attention from authorities.
—Dave Martin/AP

Alabama school districts are reeling from the impact of the state’s tough, new immigration law and a federal court ruling upholding a portion of the statute that requires schools to report on the immigration status of their students.

That requirement flies in the face of long-standing practice in Alabama and other states, as well as recent federal guidance that collecting such data would have a chilling effect on student enrollment and therefore would violate undocumented students’ right to public education as recognized by U.S. Supreme Court precedent.

And while Alabama administrators have taken steps to reassure families that children would not be denied admission, thousands of Hispanic students were reported absent in the days after the law went into effect Sept. 29. Local officials also worry that continued absences could hurt enrollment-based state education aid to schools and districts.

Eric Mackey, director of School Superintendents of Alabama, said Alabama educators are in a difficult position. “We want to make sure they’re following federal law ... and state law. We’ve been told there is a way to do both, but you have to walk a very creaky tightrope, so you don’t lean too far one way or the other.”

Alabama is unique in requiring schools to check students’ immigration status, according to the National Conference of State Legislatures. In Texas, California, and Arizona—where a new immigration law last year raised concerns about potential indirect impacts on immigrant students—officials say schools are authorized to verify students’ residency, but not their immigration or citizenship status. Jenny LaCoste-Caputo, spokeswoman for the Texas Association of School Administrators, said collecting immigration data is “not the business of schools” in Texas.
Opposition Continues

National education, labor, and civil rights groups have been speaking out against the law.