“There are two kinds of conflict...One is financial conflict. That one’s obvious. Then there’s having dual board membership where their purposes are in conflict.”
- Gordon Appleman

And this issue is just one part of the larger goals of the Oversight Committee. 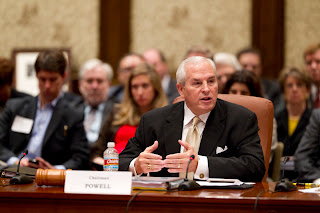 UT Board of Regents Chairman Gene Powell asks the Board to support Chancellor Dr. Franciso Cigarroa at their Austin meeting on May 12, 2011.

At a recent hearing of the new joint higher education oversight committee, state Sen. Judith Zaffirini asked the chairmen of the University of Texas System and Texas A&M University System regents what they had done to prevent conflicts of interest on their respective boards. There was a long pause.

She asked if either board has “a statement setting forth the expectations for the conduct of its members.” Both men said they would have to get back to her.

Zaffirini, a Laredo Democrat and co-chairwoman of the committee, is likely to get an answer even if they do not. Legislators and other concerned groups are preparing for a thorough review of the conflict of interest policies — or lack of policies — that apply to regents of the state’s public university systems.

In addition to the oversight committee — which Zaffirini leads with Rep. Dan Branch, R-Dallas — the House speaker, Joe Straus, R-San Antonio, has directed the General Investigating and Ethics Committee to study whether the governor’s appointees, regents included, should be required to “sign additional governance documents prior to serving in an official state capacity.”

Such policies are common in higher education. A 2008 survey conducted by the Association of Governing Boards of Universities and Colleges of its member institutions showed that nearly 80 percent of public boards that responded had a policy regarding conflicts of interest. Roughly 50 percent required members to sign an annual statement.

Most of the six major university systems in Texas have a policy specifically for regents. An A&M spokesman said their regents are covered by their system’s general written policies. But the UT System, one of the state’s largest, is an exception.

“There’s nothing in writing, but there’s several state laws and common laws relating to conflict of interests, especially on the financial side, that we would adhere to just like any state agency would adhere to,” said Anthony de Bruyn, a spokesman for the system.

He said that board members worked with the general counsel to prevent conflicts.

That does not satisfy some critics of the board overseeing the University of Texas at Austin. This year, a coalition largely made up of prominent U.T. alumni formed out of concern that university system regents might put into action controversial policies proposed by the Texas Public Policy Foundation, a conservative research organization.

Each of the UT and A&M boards has a member who also serves on the policy foundation’s board.

“There are two kinds of conflict,” said Gordon Appleman, a Fort Worth lawyer and founding member of the coalition. “One is financial conflict. That one’s obvious. Then there’s having dual board membership where their purposes are in conflict.” He said a written policy was necessary to clarify the rules surrounding both.

At the hearing, Gene Powell, the chairman of the UT System board, cautioned against infringing on the rights of regents, who serve voluntarily, and said they were aware that their chief loyalty lies with the system. “I think they have the right to participate on boards and associate with who they want to associate with,” he said.
Posted by Dr. Patricia D. López at 12:32 PM