Great piece on the Fair Funding Now Campaign Roundtables. Dr. Albert Cortez has been a leader in school finance since the early 1980s.

Please check out the website for more information on this effort as well as the amazing tools that allow you to weigh in on how the budget cuts are impacting your district and public schools. 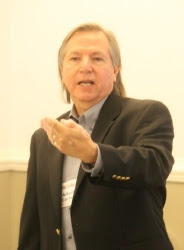 Albert Cortez, of the Intercultural Development Research Association, speaks at a roundtable in Alamo on Saturday. (Photo: RGG/Steve Taylor)

Albert Cortez, director of policy for IDRA, explained how litigation was proceeding to improve equity in public school finance. This litigation is necessary, Cortez said, because some school districts are getting $1,000 less per pupil. “About half the school districts in the state are going to be suing the State over the funding system,” Cortez explained, during a power point presentation.

There are roughly 1,100 school districts in Texas. About 500 different districts are being represented in the litigation by four different groups. The two groups providing most assistance to Rio Grande Valley school districts, Cortez said, are the Equity Center and the Mexican American Legal Defense and Educational Fund. Both of these are concerned about equity, with the Equity Center, for the purposes of the litigation, setting up a group known as the Texas Taxpayer and Student Fairness Coalition. This coalition has about 300 districts signed up, including PSJA ISD and Rio Hondo ISD. PSJA Superintendent Danny King was present at the roundtable.

Cortez said MALDEF is a key player because of its history in fighting for school finance equity. He pointed out the group took the lead in the famous Edgewood case of 1973, known as Rodriguez v. San Antonio ISD. Cortez said MALDEF would be looking for a smaller subset of school districts, parents and students to help its cause when the case goes to court. He said he expects MALDEF’s petition to be filed early next month.

In addition to the Equity Center and MALDEF, there will be two other groups involved in the litigation with different interests, Cortez said. The rich school districts will be trying to get authority from the Texas Supreme Court to expand the funding gap between rich and poor districts. Meanwhile, the large, urban, districts will be fighting over adequacy, not equity, Cortez said, by making the point that the State of Texas does not provide enough funding.

Cortez said the litigation approach of Equity Center and MALDEF is compatible. “We think the data is on our side,” he explained. “In Edgewood I the state said if a district makes the same tax effort as another district, they should get the same amount of money. The Supreme Court upheld that principle. Under the current system there is no connection between the tax effort PSJA makes and how much money it gets. It can make the same tax effort as a rich district, or greater, and get $1,000 less per pupil.”

Cortez pointed out that after the last round of litigation against the State of Texas, known as the Orange Grove case of 2006, school districts had to be allowed some ability to raise extra funding to supplement local programs. Back then, about 100 districts were “maxed out” at the $1.17 per $100 property valuation. Now the number is more than 200, Cortez said. “Even if they want to raise more money they are locked in. They cannot do any better than they are doing,” he said. So, in effect, an unconstitutional statewide property tax was now in place, Cortez said.

Cortez said he expects the school finance trial to take place late summer or early fall, 2012. A ruling may not come until the following spring, right in the middle of the 2013 legislative session. He concluded his remarks by saying that once the school funding system is ruled unconstitutional, the voices of Rio Grande Valley communities will need to be raised in order to get state lawmakers to fix the equity gap and provide adequate resources for school districts.

In an interview with the Guardian after his presentation Cortez said the impact of some school districts getting $1,000 per student less was enormous. “We have done the math and you are talking about over half a million dollars in a campus of 20 classrooms,” Cortez said. “That creates tremendous differences in what school districts can provide to their children. We have never believed the quality of a child’s education should depend on what neighborhood they live in. We have a situation where there is a subgroup of districts that have a tremendous advantage.”

Cortez said that during the last legislative session, IDRA was trying to get school funding distributed a little fairer, so the students who were getting significantly less would get the programs and support they needed. “There was a great reluctance to share the wealth,” he said.

Asked how much the Valley lost because of school funding cuts last session, Cortez said it was in the region of $134 to $150 million. He said the Valley has about half a million students in public education, which is about ten percent of the total in Texas. “The half a million in the Valley has a tremendous impact for the State. If we talk about economic development for the Valley, how can you have your dreams of economic development when you are not providing those communities with the resources they need to produce the workforce?” he said.

Cortez said that in a way the Valley represents the canary in the mine. “So the Valley goes, so goes Texas. The Valley looks like what the rest of Texas will look like. State leaders need to realize that this is a vital part of Texas. You are one of the lynchpins. If we do not do well by the Valley we do not do well by Texas. The leadership does not make the connection we are all inter-connected. If we do not educate our children in the south of Texas, the whole state changes, because of mobility,” Cortez said.

Aurelio Montemayor, senior education associate for IDRA, said he hoped his group’s extensive research would be used by school districts in the Valley to help mobilize support for a more equitable school finance system. “Use the hell out of all these materials. Have the superintendents come together and say, look how you got hit,” he said.
Posted by Dr. Patricia D. López at 11:41 PM