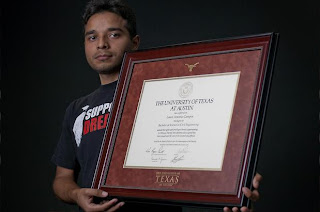 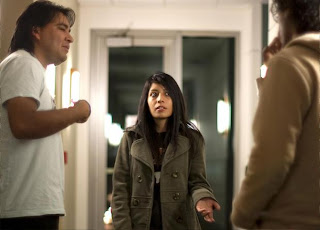 Loren Campos and Juana Garcia were brought to the U.S. by their parents. They have educations, but they can't work in the U.S.

Loren Campos graduated from the University of Texas in May with a degree in civil engineering. He said he waited until the last minute to buy his cap and gown and class ring.

"Graduation was the last thing that I wanted to think about," he said. "That was a difficult thing to go through."

It's a familiar sentiment among undocumented students. Graduation means confronting the fact that they have earned college degrees that they can't use in the United States.

For now, the 22-year-old Campos is sharing an apartment in Northeast Austin with two friends and selling cosmetics from out of his apartment. He's also active in the University Leadership Initiative, a group for undocumented students.

"I cannot work with my degree," he said. "I cannot get a driver's license."

He says he's watched other undocumented friends graduate from college, "and a lot of them go back to working low-wage jobs. ... It's just a waste of talent. It doesn't make sense to be investing in the education of students without having some sort of return on that investment."

The Texas Dream Act requires students to file paperwork to become legal residents. Campos did that in 2003, when he was 14. His sister, a U.S. citizen, is sponsoring him, and he figures he'll have to wait another seven years before his case is reviewed. That's because the number of people trying to legally immigrate with help from family members who are U.S. citizens dwarfs the limited number of visas issued each year.

And the waiting time depends on a complicated formula based on the immigrant's country of origin and their relationship to the person sponsoring them. According to the U.S. State Department website, Mexican citizens who are being sponsored by siblings and applied for visas in 1996 are just now eligible to get visas.

Campos said his mother brought him to Texas when he was 11 and his sister was 16. They entered the country with tourist visas and overstayed them. He said he begged his mother to take him back to Mexico within a few weeks of arriving in Houston. His mother refused.

He remembers being teased for carrying around a Bible-size Spanish-English dictionary in school while he was in English as a second language classes. By eighth grade, his English was good enough that he was put in regular classes. He applied to the engineering magnet program at Booker T. Washington High School — "just trying to take advantage of the opportunities that were given to me," he said — and quickly jumped into extracurricular activities like the robotics club, the math club and the soccer team.

To earn money, he worked as a baggage handler for a charter bus company that catered to Mexicans, and he worked at restaurants as a waiter, busboy and dishwasher.

He's the only member of his immediate family who is still undocumented — his two sisters married U.S. citizens and became permanent residents, followed by his mother, who was sponsored by one of his sisters. He said his mother is studying for the test to become a U.S. citizen.

He'd like to stay in the United States and design buildings that can withstand earthquakes. He's heard stories of the 1985 Mexico City earthquake from family and friends, and the earthquake in Haiti "inspired me to do something about it and contribute somehow."

"I grew up with the idea that America was the land of opportunity," he said. "I've basically grown up in this country; I don't know another country."

Juana Garcia was born in a village called Juan Aldama, in the state of Zacatecas in Central Mexico — a place she can't find on a map.

"I don't know the geography of Mexico, actually," she said.

She was a year old when her parents brought her to the United States. Now 21, she has no memories of Mexico.

Her father started coming to the United States when he was a teenager, working in Dallas restaurants. When she was born, her father didn't want to be separated from his first child and persuaded her mother to join him in the U.S.

They settled in Chicago, where all of her mother's family had migrated, then moved to Arlington when Garcia was 12. At each stop, her parents found work — her father operated forklifts in a warehouse and cooked in a hotel restaurant, while her mother cleaned hotels and malls and now works at a dry cleaner.

Garcia, who qualified for free and reduced school lunches, did well in school, taking Advanced Placement courses and singing in the choir. Growing up, she hid the fact that she was undocumented from friends, classmates and teachers — until her junior year of high school, when she was forced to confide in someone.

The choir had received a coveted invitation to sing at the American Choral Directors Association conference in Miami, all expenses paid. Excitement about the trip built all year, she said, as the choir rehearsed for the performance. Then her parents said no. She didn't have a driver's license, and they were afraid she'd be detained at the airport.

She had to tell her choir teacher that she couldn't go — and she had to tell her why. "It was so hard for me, because I had never told anyone face to face," Garcia said. "I remember I cried a lot over it." She said her teacher was supportive, which gave her confidence to speak up when she got to college.

Garcia finished in the top 10 percent of her class, went to community college for two years, then transferred to UT last year. She joined University Leadership Initiative and now serves as its social committee chairwoman. She was part of a group that traveled by bus to Washington to tell their story to U.S. senators, urging them to pass a federal DREAM Act. She said "coming out" in such a public way was liberating.

"Being around so many people that have done it already gives you a sense of comfort," she said. "You feel better not having to hide something. You shouldn't have to hide, because it's not your fault."

At times, she said, she's resented her parents' decision to bring her to the United States. When her younger brother and cousins — who are U.S. citizens by birth — would go to Mexico to visit relatives every summer, she stayed home. When her high school friends were learning to drive, she was reminded that she can't get a driver's license. When her college friends began getting summer internships and doing semesters abroad, she swallowed her jealousy.

"I've had my moments," she said, sipping a drink in a West Campus Starbucks, "but I'm glad I'm here."

And now, with a year to go before she gets her degree in elementary education, she knows she won't become an elementary school teacher unless Congress passes the DREAM Act.

"It's a very depressing idea because it's getting really close," she said.
Posted by Dr. Patricia D. López at 12:23 PM